South Korea’s Unification Ministry said it would “do its part” in working toward improving relations with North Korea and formally ending the Korean War as agreed in a historic meeting between the two longtime foes on April 27.

Officials in the South were left blindsided Thursday after Trump penned a letter telling Kim he was canceling the summit because of “tremendous anger and open hostility displayed” by the North.

President Moon Jae-in called an emergency meeting and government spokesperson Kim Eui-kyeom told reporters, “We are trying to figure out what President Trump’s intention is and the exact meaning of it.”

While officials scrambled to make sense of Trump’s change of heart, the reaction among those in the capital, Seoul, was mixed.

In Itaewon, a popular Seoul nightlife district Thursday night, 20-year-old Jae Hye-rim told TIME she was happy the talks were off because she did not want unification with the North for economic reasons. Businessman Kwon Jae-won, 47, said the two Koreas were at an important juncture in their history but doubted Trump’s sincerity, dismissing his letter as a “fake political strategy.”

“I think [canceling the June 12 summit] shows how inconsistent Trump is with his policies,” a 21-year-old student at Seoul’s National University told TIME. Her friend, also a National University student, said the move would further unsettle East Asian allies concerned that America First means “Trump is just going to do whatever he wants.”

A recent survey commissioned by the Korea Institute for Health and Social Affairs, however, found that South Koreans were more concerned about air pollution than Pyongyang’s nuclear weapons program.

In the city’s Gwanghwamun Square Friday, a group of about 30 protesters holding the banners of South Korea’s left-wing Minjung party had gathered to demonstrate against the cancellation of summit. The group had erected cardboard cutouts celebrating Moon and Kim’s recent meeting at the DMZ. Between the two Korean leaders bobbed the cardboard head of Trump. Protest slogans blared through megaphones as school groups and office workers milled in the square.

A protestor wearing a face-mask depicting President Donald Trump kneels between cardboard cutouts of North Korean leader Kim Jong Un and South Korean leader Moon Jae-in during a rally calling for more dialogue between the three leaders, outside the U.S. embassy in Seoul on May 25, 2018.
Ed Jones—AFP/Getty Images

Nearby, across the street from the U.S. Embassy, about 20 more protesters aligned with South Korea’s leftist People’s Democracy Party (PDP) had gathered with placards bearing images of Trump sporting Nazi regalia and surrounded by warplanes. One sign, written in English, read “withdraw U.S. troops.” A 22-year-old student-committee member of the PDP who declined to give his name said police were blocking him from delivering a letter to the Embassy criticizing the U.S. President.

Also demonstrating near the embassy were members of an all-women’s delegation of representatives from civil society groups based in the U.S., U.K., Japan, South Korea, Mongolia, and other countries. The 30 women had arrived in Seoul on May 22 to show “solidarity with the Korean people” and highlight the role of women in peace building. They announced they would be holding a candlelit vigil Friday evening in response to Trump canceling the summit.

One of the members of the delegation was Ann Wright — a retired U.S. army colonel who resigned from the U.S. State Department over opposition to the Iraq War. She told TIME that despite National Security Advisor John Bolton and Vice President Mike Pence’s provocative references to the “Libya-model,” and North Korea’s warning of a “nuclear-to-nuclear-showdown,” she was shocked that Trump had canceled the summit.

Bolton had earlier enraged Pyongyang by suggesting the country follow a “Libya-model” of nuclear disarmament. Libya’s leader Muammar Gaddafi was executed following a Nato-backed uprising less than eight years after surrendering his nascent weapons program. On Monday, Pence suggested that North Korea may end up like Libya if Kim “doesn’t make a deal.”

Wright urged Trump to resist the hawkish influence of Bolton. “The Korean train for peace is moving and if the U.S. wants to be a part of it, they better get moving. Because if they attempt to derail this, the world will again castigate the United States,” she said.

According to the White House, U.S. officials had become frustrated by North Korea’s elusiveness in the run up to the planned summit. Pyongyang reportedly promised to meet Trump administration officials in Singapore last week to discuss logistics for June 12, but the North Koreans never showed. “They simply stood us up,” one White House official said, according to the Washington Post.

Read more:President Trump Canceled the North Korea Summit to Get the Upper Hand

Nevertheless, the door for talks between the U.S. and North Korea remains open. On Friday, U.S. Secretary of State Mike Pompeo told South Korea’s Foreign Minister Kang Kyung-wha that, despite Trump pulling out of the summit, the U.S. remained committed to dialogue with Pyongyang, Yonghap news agency reports. In an apparent conciliatory statement Friday morning, North Korea also expressed its “willingness to sit down face-to-face with the U.S. and resolve issues anytime and in any format.”

Park Jung Eun, Secretary General for People’s Solidarity for Participatory Democracy, a civil society organization that advocates for democracy, also condemned Trump’s move. “We believe that the only realistic way to resolve the military conflicts surrounding the Korean peninsula and achieve a peace regime and denuclearization is dialogue and negotiation,” she said in a statement. 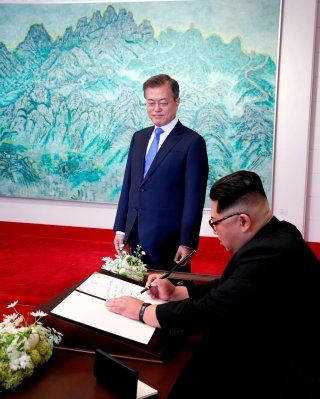 What America Must Do Now, After North Korea's Summit with South Korea
Next Up: Editor's Pick