When Lupe Valdez won the Democratic gubernatorial nomination in Texas on Tuesday night, she became the first Latina and first openly gay person nominated by a major party for governor in the state. After a strong showing in the primary back in March, the former Dallas County sheriff narrowly beat Andrew White, son of former Texas Gov. Mark White, in the runoff election. Now the 70-year-old running on a progressive platform faces a tough fight against the well-funded Republican Gov. Greg Abbott in November — one many say she can’t win.

Though it’s been nearly 30 years since Texas voters have sent a Democrat to lead their state, Valdez is confident. She talked with TIME this week about her historic candidacy, using discrimination as a stepping stone, and how she plans to swing the state.

TIME: What made you decide to run for governor?

Lupe Valdez: It was very clear that the everyday Texan was struggling quite a bit, and our governor was just more interested in the things for him and his friends than paying attention to the everyday Texan. So I wanted to make a change. The leadership should be about taking care of everybody.

I came from the poorest zip code in San Antonio. There were no paved streets, there were no sidewalks. Often you felt uncomfortable going to general things like school or football games because we were so poor. To come from that to being the candidate of a major party for the governor of one of the largest states in the nation, it’s just humbling. It’s extremely humbling.

Right as we were winning, I got a call from my niece in San Antonio. My mom and dad never got to see me as a sheriff or as anything else. In tears, she says, “Mom would be so proud of you.”

Even though this is a history-making moment for you, voter turnout for the runoff election was the lowest since 1920. What does that say about your mandate among Democratic voters in Texas?

We’ve seen a wave of Democratic women winning races this year—especially in red states like yours. How do you think the political environment has changed for women candidates?

That’s what we’re doing. We’re just tired of seeing everything so messed up and tired of having things going in the wrong direction. We’re going, “Hey, we need to grab hold of this and make sure it starts getting back to normal and to the way that it’s supposed to work out better for everybody.”

In the primary, immigration activists raised some concerns about your record on immigration and did not like that your sheriff’s office complied with federal detention orders. How will you address those concerns?

We have been addressing it. As a proven executive, I had to make some very hard decisions. And the decisions were always based on what is best for the whole. That decision that you’re talking about, I would lose funding if I had not made the decision I did. I would lose funding for several of the county agencies including the juvenile court, drug court, health and human services. It was an imperfect choice and no perfect decision could be made.

But if we go back to the values, I have always, always, always fought for the undocumented. As a matter of fact, I have been fighting against the Texas law SB 4, and I fought against that way before I started running for governor. All along, we pushed for a path to citizenship for the Dreamers. This is the only country they’ve known. They’re productive, they’re part of our community, so of course I would use the bully pulpit for a path to citizenship for our Dreamers. So as far as the value is concerned, I was always there. The decision that one group was upset about was a decision that I had to make because there was no perfect choices there.

You’ve talked about facing discrimination for being a lesbian woman of color while working in law enforcement in Texas. Is there a specific moment that stands out in your memory?

I was in a situation where women were about to take [over as] management and a gentleman said, “I’ll be blankity blank blank if I’m going to take orders from someone who has to sit down to pee.” I remember feeling real humiliated, real embarrassed, because it was a room full of men. I remember thinking no one should be put in this situation.

All of your incidents, all of your experiences can be used as a stumbling block or a stepping stone. I think it’s important that in all of my experiences, that I use it as a stepping stone. For instance, SB 4, we’ve put all of law enforcement in an extremely uncomfortable situation involving the trust of the immigrant communities. The immigrant communities will not talk to an officer now because they’re afraid of them. What we need to do is learn from our experiences and make sure that we don’t allow that to happen anymore.

Candidates who are minorities are often forced to strike a balance between reaching for wide appeal and leaning into causes that their minority group is passionate about. How have you balanced this?

Somebody said to me the other day, “You fit all the categories.” I was a federal agent, I was in the military, I was poor, I am Hispanic, I am LGBT, as a team we’ve fought against organized crime and on and on. We have more in common than we have differences. In my current position, it’s very easy for a lot of people to find something in common with me. The only people that I really couldn’t identify with is the upper 1 percent. And you know something, in the upper 1 percent, I would probably find something. I’m sure some of them have served in the military, I’m sure some of them have worked to get through college. So I shouldn’t even say that. I think that with everybody you can find something in common.

In a state as Republican as Texas, many would say you’re still a long shot to win the governorship. How do you respond to that? Is it realistic for Texas to be competitive for Democrats this year?

Everybody tells me it’s an uphill battle. But my response to them has always been: when hasn’t it been? When I was a child I went clear across town on a public bus so I could get a decent education. That wasn’t a cake walk. Was it easy when I was working two or three jobs to get through college? Was it a cake walk when I was in the military in a tank battalion? Was it easy when I took over a male dominated organization that did not want female leadership? I’m getting darn good at uphill battles. And I’m not done yet. I’ve got another one coming. 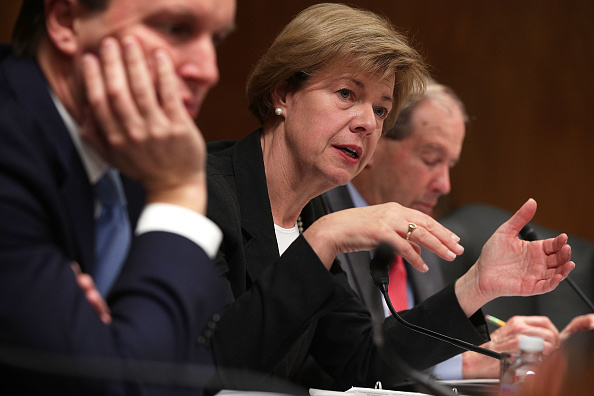 Why Tammy Baldwin Opened Up About Her Mother's Addiction
Next Up: Editor's Pick