President Trump Just Pardoned the Boxer Jack Johnson. Here's What to Know About the Original Case

President Trump pardoned Jack Johnson on Thursday, more than a century after the late boxer was convicted on kidnapping charges for transporting a woman across state lines in a case that was decried at the time by the Chicago Defender, a black newspaper, as an “out-burst of racial prejudice.”

It’s not common for individuals to receive a presidential pardon after their deaths, and Johnson joins only two others whose convictions were stripped posthumously by a president. In 1998, Bill Clinton pardoned Lt. Henry Ossian Flipper, who was born into slavery and always maintained his innocence after being convicted of conduct unbecoming an officer in 1881. And in 2008, George W. Bush pardoned Charlie Winters, who had been convicted under the 1939 Neutrality Act for his role helping Israel in the 1940s. So what are the facts of Johnson’s case that have earned him a spot in this trio?

Johnson, the world’s first African-American heavyweight boxing champion, was an indomitable figure in the early 1900s. Johnson won the title from the Canadian boxer Tommy Burns in 1908. He later lost the title in 1915.

During the years between Johnson winning and losing the heavyweight champion title, the boxer fell into legal issues and was repeatedly slammed by the press for his life outside the ring, including blistering criticisms of his romantic relationships with several white women. At the time, it was not just a departure from convention but also dangerous for a black man to court a white woman, and laws against interracial marriage had not yet been declared unconstitutional by the Supreme Court.

One of those relationships would lead to the conviction for which he was pardoned this week. In 1912, Johnson met Lucille Cameron, an 18-year-old white prostitute. Later that year, Cameron’s mother accused Johnson of kidnapping her daughter, saying, per a PBS report that accompanied Ken Burns’ Jack Johnson documentary Unforgivable Blackness, that she would “rather see my daughter spend the rest of her life in an insane asylum than see her the plaything of a [n—].”

Johnson was arrested in October 1912 for violating the Mann Act, which outlaws the transportation of women across state lines for “immoral” purposes. The Mann Act, passed in 1910, was put into place based on officials’ assumption that women who were sex workers were coerced into their jobs. While the act was meant to quell the alarm over women being trafficked, the way it was enforced often went beyond prostitution convictions, as the term “immoral purpose” could be loosely interpreted. Under the Mann Act, authorities were able to target people they wanted for a variety of reasons.

The initial case against Johnson was thrown out because Cameron refused to cooperate at the time, but Johnson was arrested again and convicted by an all-white jury under the Mann Act in 1913 for driving with Cameron — whom he had married by the time of the conviction — across state lines.

Johnson skipped bail and fled with Cameron to Canada. Over the following seven years, he and Cameron lived in Europe, South America and Mexico. Johnson eventually surrendered to federal agents in July 1920 and was imprisoned until July 9, 1921.

Johnson died in 1946. His family, including his great-great niece, has long pushed to have him pardoned posthumously. Over the years, their cause gained support from Sylvester Stallone and politicians such as Arizona Sen. John McCain and former Senate Majority Leader Harry Reid.

Trump on Thursday said he was trying to “correct a wrong in our history” by pardoning Johnson. 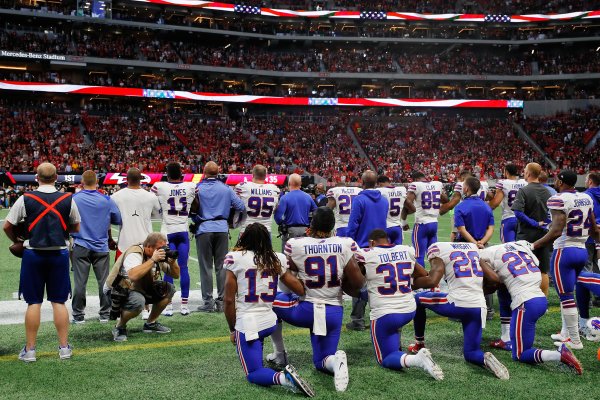 The NFL Told Teams to Stand During the National Anthem in the 1960s. Here's How One Player Protested
Next Up: Editor's Pick