Why President Trump's North Korea Summit Is Still Likely to Happen, According to a Top Expert

Leon Sigal, the director of the Northeast Asia Cooperative Security Project at the Social Science Research Council, says Trump’s letter Thursday informing Kim that he is canceling their scheduled June 12 face-to-face meeting should not be taken as the end of the two countries’ negotiations for a summit.

“If you read his letter carefully, it says things like, ‘I feel it is inappropriate at this time to have the summit’ or ‘We had a wonderful dialogue,'” he told TIME. “There are like six sentences like that. What’s happening is the critics are saying Trump was too eager for the meeting. Now he’s playing hard to get.”

Sigal has studied past negotiations between North Korea and the U.S., including the last time North Korea promised to denuclearize in the 1990s. He sees what’s happened as a pause in the difficult diplomatic process — a chance for both sides to move past the public diplomacy and hash out the the details behind the scenes.

“I don’t think of this as catastrophic or anything like that,” Sigal said. “There’s a lot of gamesmanship going on at this point.”

In recent days, tensions between North Korea and the U.S. ramped up after members of the Trump Administration compared the North Korean negotiations to Libya, where former leader Moammar Gadhafi was overthrown and killed years after giving up the country’s nuclear weapons in 2003. The comments put the potential for a meeting in jeopardy after a North Korean official threatened a “nuclear-to-nuclear showdown” – the latest of increasingly bellicose behavior and rhetoric.

North Korea wants the U.S. to ease crippling sanctions and security guarantees that Kim and his regime can actually find believable, Sigal said. The U.S. needs North Korea to shut down its nuclear reprocessing plants and reactor, disclose the location of the country’s secret enrichment site and stop developing nuclear-capable missiles. North Korea also has a supply of plutonium, highly enriched uranium and other supplies that the U.S. wants to know more about.

Although both sides have attempted to scale down their demands, there is very little trust between the countries. “Neither side knows that the other side means what they say,” Sigal said.

Ultimately Trump must be genuine when dealing with North Korea. If he takes an “approach of sincerity,” and understands that North Korea can’t be forced to give up their nuclear weapons without negotiation, the relationship between the two countries could change entirely. 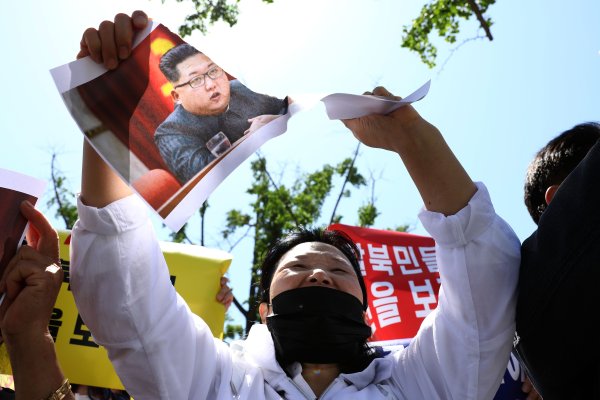 The Trump-Kim Summit Is a Tragedy for North Korean People
Next Up: Editor's Pick