Why Tammy Baldwin Opened Up About Her Mother's Addiction

Speaking at a hushed Senate committee hearing in February, Indiana nurse Becky Savage described the worst day of her life: After finding her son Jack unresponsive in his bedroom after a night of partying, she began CPR, only to see paramedics rushing into her basement to help his brother Nick.

Savage testified that she hoped talking publicly about the deaths of her two sons to overdoses of oxycodone could help spread awareness of the dangers of opioid abuse.

“Nick and Jack may no longer be able to live their dreams, but by telling their story we can help others live to reach their dreams,” she said.

Her message particularly resonated with one person in the hearing that day: Sen. Tammy Baldwin. The Wisconsin Democrat has long been open about the fact that she was raised by her grandparents, but she’d been largely private about the reason why. An hour and a half into the hearing, Baldwin decided to share her mother’s story too.

“My mother was 19 when I was born, going through a divorce, and moved back home,” Baldwin said. “Throughout her life, [she] struggled with mental illness, physical illness, and chronic pain for which, in the days well before we labeled an opioid epidemic she was prescribed a multitude of benzodiazepines, narcotics, and other medications.”

In the months since, Baldwin has become even more public, sharing her mother’s struggles in meetings with constituents, interviews with reporters and even an ad for what could prove to be a tough re-election campaign.

“I remember what it was like to come home from school and not be able to get into the house,” Baldwin says in the ad’s voiceover. “I would pound on the door, but my mother wouldn’t answer. She’d be passed out inside.”

In an interview with TIME, Baldwin says she took Savage’s openness as a call to action. “That was an invitation that I accepted and I have continued to do so,” she says.

Her decision was not spontaneous, however. Baldwin says that when her mom died in 2017 and she began to recall the good — and not so good — times they shared, she started to think of opening up about addiction as a way of honoring her mom’s legacy. “I was always very sensitive to the fact that my mother felt ashamed of the fact that she wasn’t able to raise me and this was a recurring struggle in her life,” she says. “I feel like she would approve of her story being used to empower others.”

Wisconsin has been hit hard by the opioid epidemic. Emergency room visits for opioid overdoses were up 109% in the state between July 2016 and September 2017. In 2016, there were 827 opioid-related deaths in the state, up from 615 the year before, according to state records.

That means a lot of her constituents can relate. Since opening up, Baldwin says she’s gotten positive reactions from friends and Wisconsinites who have thanked her, shared their own stories, and in some cases, simply embraced her.

These conversations come as Baldwin is in the middle of a tough reelection battle in a state that Donald Trump narrowly won in 2016, making him the first Republican to carry the state in three decades. Ahead of the primary election in August, the two candidates most likely to face Baldwin are Republicans Kevin Nicholson, a former Marine and a former Democrat, and state senator Leah Vukmir, who was endorsed by the state’s Republican Party in May.

The Wisconsin Senate race is gearing up to be an expensive one. Outside money is pouring into the state; more outside spending, in fact, than any other Senate race in the country. Around $11.6 million has poured into the race so far, a Center for Responsive Politics analysis found, and some $3.1 million has already been spent to attack the incumbent Democrat.

The subject of opioid abuse has also become a campaign issue, with Baldwin facing some heat for not taking stronger action.

After Marine veteran Jason Simcakoski died of an overdose at a Tomah veterans medical center in 2014 while seeking treatment for addiction to painkillers and anxiety, Baldwin’s office faced criticism when it was revealed that aides were aware of an inspection report on opiate prescribing. Baldwin publicly acknowledged the issues with the way her office handled the situation and reprimanded members of her staff — one person was fired — as a result.

The Koch-backed group Concerned Veterans for America has made two six-figure ad buys so far this cycle, targeting Baldwin. The CVA ads have criticized the Senator’s response to what happened at the Tomah VA Medical Center.

In a statement to TIME, Dan Caldwell, the executive director of Concerned Veterans for America, said, “the opioid abuse that was happening at the Tomah, WI facility was a prime example of the need for reform, and given Senator Baldwin’s lack of action for months, we are working hard to urge her to support strong legislative solutions. The Tomah crisis has been a major focus of ours since it became public.”

Baldwin has since worked with the veteran’s family and veterans groups on legislation in honor of Simcakoski. “I know that one of the reasons that we worked so hard together was that we’d walked in each other’s shoes,” she tells TIME. “I’ve been there. And their story — Jason’s story — has provided help to others.”

In an interview with TIME, Baldwin was critical of the amount of outside money that has poured into the Senate race in her state calling it a “obvious attempt to buy a Senate seat by the Koch brothers network” and other “out-of-state billionaires.”

“These folks are spending so much money because they have an agenda,” she says. “And they know I’ll put Wisconsinites over their agenda always.” 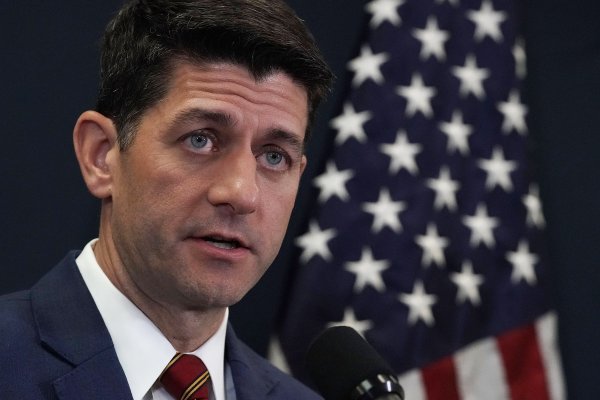 Republicans Are Tearing Themselves Apart Over Immigration
Next Up: Editor's Pick