A Pro-Choice poster urging a 'yes' vote in the referendum to repeal the eighth amendment of the Irish Constitution seen near Ha'penny Bridge in Dublin's City Center on May 16, 2018.
NurPhoto—NurPhoto via Getty Images
Ideas
By Graham Linehan
Linehan is an Irish television comedy writer and director, best known for Father Ted, The IT Crowd and Motherland.

In 2004, my wife Helen and I heard that the baby we dearly wanted would not survive longer than an hour after birth. She was 11 weeks into the pregnancy when we learned the fetus had a condition called acrania—meaning that the skull would not form properly around the brain. And because we were in England—rather than my home country of Ireland—we immediately requested a termination, and received one just a few days later.

Any man would have done the same. Unless of course, they lived in Ireland—where they would have to do far more. There, Helen would have been forced to carry the pregnancy to term, or face a 14-year prison sentence for procuring an illegal abortion.

Ireland’s solution to this problem has always been England. On average, nine women travel to the U.K. each day to receive the compassion and care denied to them by their own country.

On Friday, Ireland votes on whether to repeal an amendment in our constitution that puts the life of a pregnant woman on a par with the life of the fetus. I’m hoping people vote ‘Yes’ to repeal, but to tell the truth, I’m still shocked we’re having the vote at all.

Read more: Thousands of Irish citizens are flying home to vote in the historic abortion referendum

I thought the aversion to abortion ran far too deep in my home country—a country full of people formed by dim memories of the videos shown to us in school by The Society for The Protection of Unborn Children (SPUC). Violent, upsetting and misleading grindhouse documentaries designed to repulse our moral sense and send us home shaken, primed to become good Catholic child soldiers who would protect defenceless wee babbies from their own mammies.

The most famous of these films, The Silent Scream, featured an ultrasound of an abortion—initially run at slow speed, but then sped up on the arrival of surgical instruments to give the impression that the fetus was thrashing around in pain, or perhaps trying to defend itself. Showing these videos to children was a subtle form of abuse and highly effective propaganda. I feared the Silent Scream would always drown out the actual voices of living Irish women.

I was a child soldier myself. I didn’t have to watch a movie to know that abortion was an abomination. When the priests who taught us described this barely believable horror (killed by their own mammies??), they had few answers for why a woman might voluntarily put herself under a surgeon’s knife. And we didn’t know what questions to ask—because we didn’t know there were questions to ask.

John Irving’s The Cider House Rules was the novel that upturned my belief system and probably altered the whole course of my life. In it, Irving interrogates the subject of abortion from multiple directions through his protagonist, Homer Wells, an American doctor at the time of the Second World War. Although deeply troubled by performing the procedure himself, he feels he must; the alternative is to let his pregnant patients take poison, throw themselves down stairs or endure the horrors of improvised backstreet surgery.

Irving taught me that women must have access to safe, legal abortions because without that access, they will have unsafe, illegal abortions.

Today, the moment an Irish woman sets foot on the tarmac of a British airport, she assumes full control over her own body. Her rights, stolen from her by another referendum in 1983, are suddenly returned by the miracle of flight and the miracle of people like Mara Clarke, who runs the Abortion Support Network.

“Ireland is dependent on England for abortion,” she says. “Think of the level of desperation that drives our clients to contact a group of strangers in England, involve them in their pregnancy, and ask for money for an abortion. One of them said to me ‘I’m so ashamed to be asking you for help’ and we said, ‘It’s not your shame. It’s Ireland’s shame.’”

Some men, possibly out of a misplaced sense of chivalry, have said that they won’t be voting as it’s a women’s issue and should be left to them. But if the ‘No’ vote wins, women will go back to having no voice, no say, no choice in their own medical care. Evil will flourish because of good men doing nothing.

In The Cider House Rules, mentor and father figure Wilbur Larch sums up Homer Wells’ predicament, which is, of course, the predicament of my country.

“Here is the trap you are in….Because abortions are illegal, women who need and want them have no choice in the matter, and you—because you know how to perform them—have no choice, either. What has been violated here is your freedom of choice, and every woman’s freedom of choice, too. If abortion was legal, a woman would have a choice—and so would you. You could feel free not to do it because someone else would. But the way it is, you’re trapped. Women are trapped. Women are victims, and so are you.” 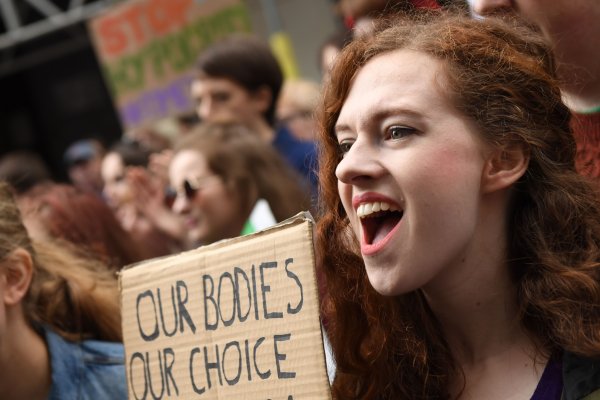 Ireland's Abortion Debate Is No Longer About the Church
Next Up: Editor's Pick