The NFL Told Teams to Stand During the National Anthem in the 1960s. Here's How One Player Protested

On Wednesday, the NFL announced that players must either stand for the national anthem when it is played at their games or remain in the locker room; if they come onto the field but don’t stand, their teams will be fined. The decision comes more than a year after San Francisco 49ers then-quarterback Colin Kaepernick decided to sit and kneel during “The Star-Spangled Banner” as a protest against police brutality, inspiring other players to do the same.

This isn’t the first time that the commissioner of the league has decided to clarify how players should act during the song.

The anthem had become a mainstay at professional football stadiums shortly after the end of World War II, when NFL Commissioner Elmer Layden called for teams to play the national anthem at the beginning of games, continuing what had been seen by some as a temporary wartime show of patriotism. “The National Anthem should be as much a part of every game as the kick-off,” he declared. “We must not drop it simply because the war is over. We should never forget what it stands for.”

But as the anthem stuck around, the song also became a focus of protest. More than two decades later, millions around the world watched as Olympic sprinters Tommie Lee Smith and John Carlos bowed their heads and raised black-gloved fists during the national anthem at the 1968 Summer Games in Mexico City, in protest against racial inequality.

Shortly after, hoping that something similar wouldn’t happen during a football game, the NFL commissioner at that time, Pete Rozelle, announced that players had to hold their helmets in their left hands and salute the American flag during the anthem. (Previously, some players had simply stood around casually or used the time to get ready for the game.)

The decree wasn’t unprompted. “There were a lot of rumblings about the Vietnam War in the league by players, so [Rozelle] thought there was a lack of discipline,” Marc Ferris, author of Star-Spangled Banner: The Unlikely Story of America’s National Anthem, tells TIME. “Players did conform because Rozelle was pretty iron-handed — except one guy.”

That guy, the kind of rebel Rozelle about whom was clearly worried, was David Meggyesy, a linebacker for the St. Louis Cardinals (now the Arizona Cardinals). League officials had already gotten wind of 37 players signing an anti-Vietnam War petition that he was circulating and planning to send to Congress. Meggyesy described what irked him about Rozelle’s directive in the book Generation on Fire: Voices of Protest from the 1960s, An Oral History: “I became increasingly aware about how the game was being used by the establishment forces to sell the war, with things like patriotic half time demonstrations and military jets flying over the Super Bowl… It was like the military.”

“My original idea was to pull a [Tommie] Smith by raising my right fist in the air and bowing my head,” he wrote in his 1970 tell-all Out of Their League. “Instead, I decided not to salute the flag but to pretend I was nervous for the game. I was aware that if my protest was too obvious I would be severely fined. When the National Anthem started I stepped out of line and began kicking the dirt and holding my helmet down in front of me with my two hands. My head was bowed and I was spitting on the ground and moving from side to side scuffing the ground with my shoes.”

But his more subtle protest was still noticed. Especially after a sports columnist covered his actions, the team and local radio stations were flooded with callers complaining about Meggyesy’s apparent lack of patriotism. “At the start of our next game,” he later told writer Dave Zirin, “some fans unfurled a big banner that said ‘The Big Red [the nickname of the Cardinals] think Pink.’ It was their way of saying that I was a ‘pinko’ (a communist), and that we were a ‘pinko’ team.”

He was benched and eventually had to leave the league. In that period, Rozelle also told players specifically not to chew gum or talk during the song. “It was absolutely unfair, but what really pissed me off was that I was powerless to change it, so I decided to write a book to expose football for what it was,” and to “have a role in this movement for social justice and social change,” he said in Generation on Fire.

Written in about four months, the book contained a number of bombshells. In a 1971 review, TIME called it “an angry, sometimes self-righteous attack on the ‘incredible racism,’ ‘dehumanizing conditions’ and ‘violence and sadism’ of pro football. Sparing no one, Meggyesy rails against coaches, trainers, who ‘do more dealing in drugs than the average junkie,’ and players, one of whom (Jim Ringo, former All-League center for Lombardi’s Green Bay Packers) supposedly told Meggyesy in all seriousness that ‘in football the Commies are on one side of the ball and we’re on the other.'” Sports Illustrated put Meggyesy’s book on its 2002 list of “The Top 100 Sports Books Of All Time,” calling it one of the first books by an athlete to expose the “‘dehumanizing’ experience of the modern professional athlete.”

Over time, the NFL’s stringency about the anthem faded somewhat. As the New York Times has noted, before Wednesday’s announcement a modern version of Rozelle’s rule about the anthem did exist, requiring players to be on the sideline but simply encouraging them to stand rather than requiring it, but, “Few knew the rule even existed until Colin Kaepernick, the former San Francisco 49ers quarterback, took advantage of that language in 2016.”

In recent years Meggyesy — who later returned to football to work for the players’ union — has had some cause to feel somewhat vindicated, as his 1968 story has been reincarnated, in a way, for another generation of players. Last year, he told Yahoo! that he thought Kaepernick’s protest was “a big yes, definitely a yes – very appropriate and timely and I think courageous.” 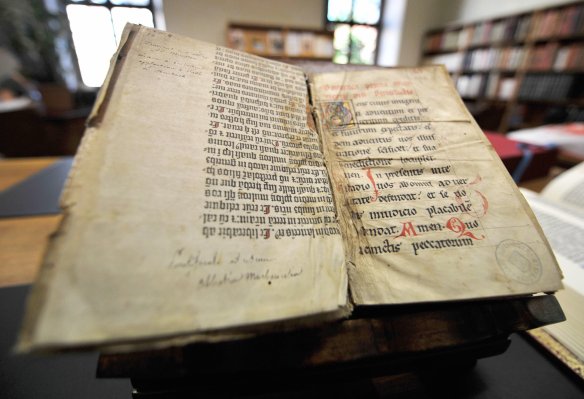 A History of the World in 6 Kinds of Ink
Next Up: Editor's Pick