Bishop Michael Curry: How I Wrote the Royal Wedding Sermon — and Why I Went Off Script

Preaching at the royal wedding was a blessing for the Duke and Duchess of Sussex, I hope. But more importantly, it was a blessing for all of us. It’s amazing that so many people watched it, that the love between Harry and Meghan brought together people, cultures and countries.

I invoked the words of Martin Luther King, Jr. during my sermon because that is what Dr. King was talking about — that even if it was just for a few moments, the royal wedding forced people to cross the lines they draw around themselves. They crossed class lines. They crossed political divisions. Everyone there who heard those words felt it. That day, everybody was so excited inside St. George’s Chapel. We could all see that this couple was in love with each other. It was obvious — it kind of put a smile on everybody’s face. Dr. King’s words are meant for all of us, prince or pauper. The rediscovery of the power of love really does change the world and change our lives.

I was asked to preach at the royal wedding sometime in early February — I thought it was an April fool’s joke at first. I couldn’t tell anyone — not even my wife — what I was doing, and just went about my business as normal.

Of course, once I got up there, I was nervous for a moment. But once I really stood up, it became church. It was clear to me we were at a moment of worship, that those who were in the room and those watching on screens was a child of the same God who is greater than us and loves us all.

The Most Rev Bishop Michael Curry, primate of the Episcopal Church, gives an address during the wedding of Prince Harry and Meghan Markle in St George's Chapel at Windsor Castle on May 19, 2018 in Windsor, England.
WPA Pool—Getty Images

The sermon was all about love and that came straight from the couple — Meghan and Harry basically wrote it for me. It all came down to the passage of scripture they selected to be read at the wedding, a passage from the eighth chapter of Song of Solomon. I really read and prayed over that passage and after sitting with it for a while, I realized they had preached the sermon before even got to it. Up until that point in the chapter of Song of Solomon, the story is a series of love poems between a man and a woman. But when you get to the eighth chapter, the woman stops talking about their love for each other and starts connecting it to what she sees as a greater love, to God, who is the source of all love. I took my cue from that and was then able to develop the sermon through that perspective. There’s enormous power in love, to heal and help. The people who matter in your life or my life, they’ve been people who loved us. There’s enormous power, both motivational and transformational power in love. I picked up that cue and took that to the next step. Everything that matters to God, everything the bible is trying to tell us, it comes down to love of God or love of neighbor. They gave me the sermon. They gave me the text.

Not everyone reacted in the same way. I’ve been a preacher since 1978 and I’ve learned in that time that there’s always a whole lot going on in any congregation. People may not have paid attention to every word but everyone was having their own moment with God, in their own way. I had fun with it too — at one point, I veered a little off script and said to them, “We gotta get y’all married.” That was my way of saying, “Give me a minute. I got one more thing to say.”

I spoke to the couple very briefly after the ceremony and they were very gracious, though they couldn’t say much due to the crowds of people. The reaction from the rest of the world has been just remarkable — I thoroughly enjoyed the Saturday Night Live skit and it was beautiful to hear people outside the church cheering. As for what Queen Elizabeth thought, Her Majesty’s reactions are her reactions, they’re private.

And although the church was filled with celebrities and some of the world’s most prominent people, when I was giving the sermon, it really felt like Michael the priest was giving a regular wedding sermon. It was no different than any other type of service — I think that’s where God really came in. Part of me suspects that, in spite of me and my foibles, he was trying to say something to the couple and everyone there. I was just a small vessel in that transaction. 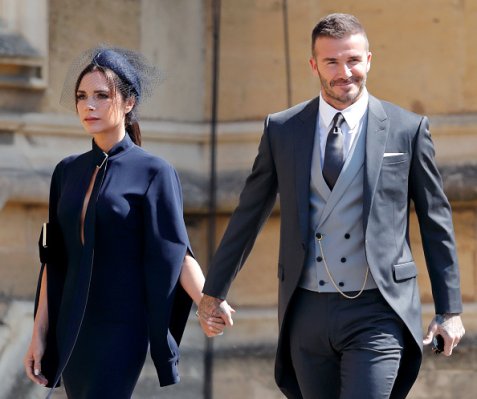 'It Felt Very Real, Very Honest.' Victoria Beckham Is Your Inside Look at the Royal Wedding
Next Up: Editor's Pick