President Trump Claims His Campaign Was 'Spied' On. Here's What Really Happened

President Donald Trump is mounting an increasingly aggressive attack on investigations into Russian meddling in the 2016 election, charging that the Obama Administration actively spied on his campaign.

The attacks, which began last week and have continued on a steady drumbeat in the days since, reference recent reporting that an FBI informant sought to learn more about the Trump campaign’s contacts with Russia in 2016.

In a series of tweets Wednesday morning, Trump argued that this could be “one of the biggest political scandals in history.” He has urged the Department of Justice to investigate whether the FBI actually penetrated the campaign, and asked his Chief of Staff John Kelly to invited top Justice Department, FBI officials and Republican lawmakers to the White House to review classified documents relating to the matter. (No Democrats were invited.)

But intelligence analysts caution that there’s little public evidence so far to back up Trump’s explosive arguments about what happened.

“Accusations that the FBI was ‘spying’ on the Trump campaign — rather than spying on foreign spies, which is its job — erase the important distinctions between counterintelligence and criminal investigations,” Asha Rangappa, a former FBI agent who now teaches at Yale Law School, wrote in an op-ed last Sunday in the Washington Post.

Here’s a quick look at the controversy.

How did the FBI use an informant on the Trump campaign?

On Friday, the Washington Post and the New York Times reported that FBI agents sent an informant to talk to two Trump campaign advisers — Carter Page and George Papadopoulos — after it had received evidence of suspicious contacts with Russia. (The informant also met with Trump campaign aide Sam Clovis.)

According to the Times, the FBI used an informant, rather than sending its own agents to do interviews, because it feared a more aggressive approach might lead to leaks that an investigation was underway, which could improperly influence the election.

The informant, an American academic working in the United Kingdom, offered Papadopoulos $3,000 to write a research paper on a disputed gas field in the eastern Mediterranean and come to London to discuss it, then asked him over drinks at a high-end hotel what he knew about Russian involvement in the hacked Democratic National Committee emails, according to the Times.

The informant also talked with Page during a symposium at a U.K. university and several times in the Washington, D.C. area, and met with Clovis for coffee in Northern Virginia, according to the Post.

Rangappa noted that using an informant is a standard technique for law enforcement and intelligence services who are trying to learn more during an investigation, arguing that it is different from “spying” done on foreign adversaries.

“A source is being used as a way to prevent infiltration by a hostile foreign power of the campaign,” she told TIME. “The term ‘spy’ as applied to the FBI suggests they were the ones doing the infiltration, and I don’t think there is any basis to suggest that.”

Who is the FBI informant?

The Post and the Times declined to name the informant, noting that U.S. intelligence officials have warned that revealing his name could expose him to risk. Some conservative outlets have identified him by name, however.

The Post identified the informant as a retired American professor who has worked with the FBI and the CIA for years and helped the Russia investigation before and after Special Counsel Robert Mueller’s appointment. The Times reported that he is “well known in Washington circles” and served under previous Republican administrations.

Where did the idea of a campaign ‘spy’ in the Trump campaign originate?

White House allies and supporters have floated the idea that a “human source” improperly assisted the FBI investigation for weeks.

In early May, House Intelligence Committee Chairman Devin Nunes (R-Calif.) asked the Justice Department for all documents about a U.S. citizen who helped the special counsel investigation. This appears to be the beginning of the current fight.

In a May 12 column in the conservative National Review, editor Andrew McCarthy openly questioned whether the FBI had “a spy in the Trump campaign,” citing testimony from Fusion GPS co-founder Glenn Simpson last fall.

In the testimony, Simpson testified that FBI agents told his coworker, former British spy Christopher Steele, that they found his research on Trump credible “because they had other intelligence that indicated the same thing” including from a “human source from inside the Trump organization.”

When that testimony became public on Jan. 9, sources from Fusion GPS told NBC News that Simpson had misspoken in his testimony and the “human source” was actually just an Australian diplomat who once had drinks with Papadopoulos and not anyone within the Trump organization.

But by last week, Trump had picked up the argument and began tweeting that the FBI had placed a “spy” in his campaign.

How does this tie into Trump’s other arguments about the FBI?

Trump has long argued that both the FBI and Mueller’s investigations into Russian meddling and possible collusion with his campaign in the 2016 election are “phony,” a “witch hunt” “and a “hoax.” He’s also claimed that the investigations are part of a “deep state” conspiracy to undermine both his campaign and his administration.

Trump has never presented any concrete evidence to back up these claims. As Rangappa, the former FBI agent, notes, the FBI was conducting a counter-intelligence informant that was most certainly trying to protect the Trump campaign, not undermine it.

“The goal there would be to protect national security by figuring out what Russia’s intentions were and their efforts to infiltrate our political processes,” she explained, noting the use of an informant was a way to keep the investigation from becoming public. “They could have been more overt or direct, but that would have raised questions for the public or the media.”

This is not the first time Trump has made broad claims about the investigation. In 2016, he alleged that President Barack Obama for “wiretapping” Trump Tower, an assertion for which the Department of Justice later said in a court filing there was no evidence.

“The narrative of the FBI spying only makes sense if you don’t believe there was a legitimate national security threat,” said Rangappa. 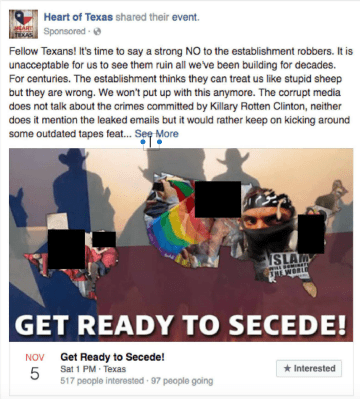 Here's What We Learned From the Ads Bought by Russian Trolls in 2016
Next Up: Editor's Pick