On Friday, Ireland goes to the polls in a historic referendum that could overturn one of the most restrictive abortion laws in the world. It’s a landmark moment: giving the Irish public the biggest chance to change the law since a 1983 referendum when the population voted by 67% to enshrine in the constitution an equal right to life for a mother and a fetus. That vote came in the wake of the 1973 Roe v. Wade case in the U.S. that decriminalized abortion, prompting Irish conservatives to fear their own country could follow a similar path.

In Ireland, like the U.S., the conversation about abortion never stopped. But the social climate today—with an increasingly secular population—has made Ireland ripe for change that was not possible in the 1980s. In the run up to the abortion referendum, younger generations have mobilized —including by encouraging members of the Irish diaspora to come home to vote.

On Friday, they will vote ‘yes’ to repeal the eighth amendment or ‘no’ to leave it in place and Prime Minister Leo Varadkar has said if the ‘yes’ vote wins, his government will introduce legislation allowing abortion in the first 12 weeks of pregnancy. The vote is set to be close.

It is the second time in three years that the world’s eyes have turned to Ireland. In 2015, 62% of voters decided in favor of equal marriage, the first country to do so by public vote. While there are similarities between the two—the Irish diaspora has come home to cast their ballots in both cases, and the campaigns have galvanized younger voters—historians and activists are aware the issues are very different.

“There was a difference with marriage equality,” Buckley says. “It was more a question of ‘do you believe in love and family and marriage,’ which is not the hardest sell in Ireland.” The campaign to repeal the eighth amendment has faced different challenges.

But the tenor of the debate in Ireland reflects the way the country has transformed in the last three decades. Heated discussion once focused on the morality of the law and the word abortion was barely used; in 1983, debate instead centered around “the substantive issue,” referring to the wording of the amendment. But there are now people speaking openly about their own experiences of terminating pregnancies—or not being able to do so because of the eighth amendment. And many of them have found creative ways to draw attention to the individuals affected.

“This referendum is long overdue,” says Julie Morrissy, one of the founders of X-ile, a photography project gathering portraits of people who have traveled for abortions. “No person under the age of 35 has had the opportunity to vote on this issue. People understand that this is a human rights and equality issue.” Her group is one of several supporting the ‘yes’ campaign finding new ways to showcase the experience of individual women—and engage people with their arguments.

A poster calling for a 'NO' vote in the referendum to retain the eighth amendment of the Irish constitution seen near Liffey river, in Dublin's City Center on May 16, 2018.
Artur Widak—NurPhoto via Getty Images

That doesn’t mean the campaign has been free of controversy. Some have still used the graphic imagery of fetuses so often used by anti-abortion activists outside clinics worldwide. Ten days before the vote—in one of the rarer instances of government input into what has largely been a grassroots-led debate— Varadkar criticized posters from the ‘no’-vote supporting Save the 8th campaign that claimed “In Britain, 90% of babies with Down’s Syndrome are aborted.”

He said his government has “made it very clear in the proposed legislation that disability will not be grounds to end a pregnancy.” The proposed legislation would allow for terminations in the first 12 weeks of pregnancy, and any after that period would only be permitted in cases of “fatal fetal abnormality” or when pregnancy poses a serious risk to a woman’s health. (Activists have pointed out that many women don’t realize they are pregnant until after 12 weeks.)

One of the most striking things for people long familiar with the issue in Ireland has been the openness with which people are now prepared to discuss abortion. Across newspapers, on radio, television and the internet, people on both sides have spoken about their own experiences. There is no shortage of women with stories to share: an average of nine women a day travel to the U.K. for abortions (and some go elsewhere in Europe), while three women a day are estimated to use illegal abortion pills.

“Thirty-four years ago, you heard little or nothing about real people affected by abortion. Women couldn’t speak up,” Ailbhe Smyth, Co-Director of Together For Yes campaign and a campaigner during the 1983 vote, said at a campaigners’ event last October.

Since March, Ireland’s public service broadcaster, RTE, has run a radio series, “Abortion Stories,” with contributors including a girl who was raped and regretted her abortion, to a man who felt his wife’s health was put at risk by the eighth amendment. On Facebook, the group In Her Shoes has become a place for women to share their stories directly, gaining over 100,000 followers in less than three months and much attention, from both the media and from anti-abortion activists, who targeted the page with 1-star reviews in April and prompted an investigation by Facebook.

Mara Clarke, founder of the Abortion Support Network, a charity that advises and provides funding for women seeking abortions, has been tweeting about the women that “haunt her”—including the women who never made it to the center for help. She works to shed light on the dangers of the law for the marginalized, who can’t travel or buy pills; women who can’t read; refugees and others without travel documents; the women who “couldn’t prove they were suicidal enough” to qualify for an abortion to protect their own lives; the teenager told by a rogue clinic that an abortion would give her cancer.

Using the arts to highlight the individuals affected by the law has been a frequent theme in the Yes campaign. X-ile started collecting its portraits in 2015 as a visual way to destigmatize abortion, Morrissy says. “There had not been a platform for people who travel for abortion care to show their faces and to demonstrate that [they] are ordinary members of our communities who deserve our respect, support and trust,” she told TIME.

Performance activists Speaking of IMELDA (Ireland Making England the Legal Destination for Abortion) put on plays across the country about women’s history, clad in a bright red familiar to viewers of the Handmaid’s Tale but used as a reference to Ireland’s own history of restricting reproductive choices—activists in the underground Irish Women’s Abortion Support Group (IWASG) used to wear red so that people seeking abortions abroad would recognize them at the station.

Ann Rossiter, a member of the IWASG and a founder of IMELDA, says, “The referendum on same sex marriage had a real ‘feel good’ factor about it. Abortion is a very different story. The perceptions are very different to giving control of reproduction to women or child-bearing people.”

But in 2018, the wider conversation has changed. The debate is no longer framed in terms of black and white morality, and has instead been pushed into the realm of human rights, healthcare and the tangible effects of the law. “The vote isn’t about abortion, but giving an equal right to life as a woman,” says Clarke of the ASN. “Our hope is that Ireland decides that it’s time for Ireland to take care of Irish women.” 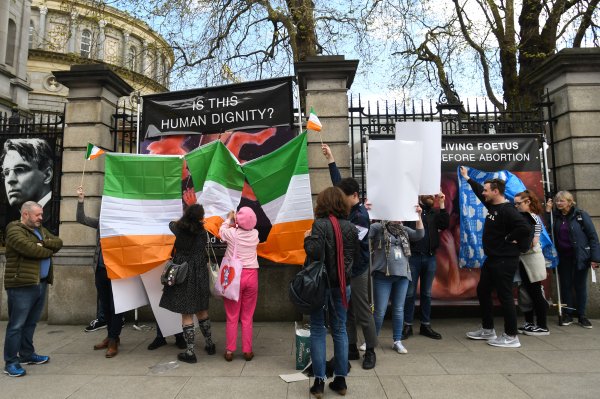 Google and Facebook Are Swaying Ireland’s Abortion Referendum Even When They Tried Not To
Next Up: Editor's Pick