Last August, nearly 100 Hindu villagers were massacred, their bodies found buried in mass graves in Myanmar’s conflict-ridden Rakhine state. For nearly a year, it’s been unclear who perpetrated the attack. The Myanmar military blamed a Muslim Rohingya insurgent group known as ARSA, while the militants pinned the slaughter on the largely Buddhist state security forces. A new report by Amnesty International holds the insurgents responsible for the bloodshed.

According to Amnesty, armed men dressed in black and plain-clothed Rohingya villagers appeared in the village of Ah Nauk Kha Maung Seik around 8 a.m. local time and rounded up dozens of Hindu women, men and children. Starting with the men, the victims were blindfolded and 53 people executed.

Eight survivors told Amnesty they saw their relatives killed, or heard their screams.

“They slaughtered the men. We were told not to look at them … They had knives. They also had some spades and iron rods. … We hid ourselves in the shrubs there and were able to see a little … My uncle, my father, my brother – they were all slaughtered,” said Raj Kumari, 18, according to the report.

“Members of ARSA captured scores of Hindu women, men, and children and terrorized them before slaughtering them outside their own villages. The perpetrators of this heinous crime must be held to account,” said Tirana Hassan, Amnesty’s crisis response director.

The atrocities committed against the Hindu community allegedly occurred on the same day that the Arakan Rohingya Salvation Army (ARSA) attacked 30 Myanmar military outposts, prompting bloody reprisals. Around 700,000 Rohingya Muslims fled over the border to Bangladesh amid a military-led campaign of violence the U.N. called “ethnic cleansing.” According to Doctors Without Borders, at least 6,700 Rohingya were killed during the first month alone.

Yet despite widespread refugee accounts of rape, torture, arson and extrajudicial killings, the Myanmar government has insistently denied the military forces committed any serious abuses. So when the government discovered two mass graves in September and claimed the Hindu victims had been killed by ARSA, the account was met with skepticism. Independent observers and journalists have also been barred from accessing the conflict area except on government escorted trips, further exacerbating doubts about the credibility of the government’s conclusion.

Amnesty says the inconsistencies were the result of “pressures and threats to personal safety,” with ARSA forcing the victims to pin the Hindu massacres on Buddhist Rakhine villagers return

After the Hindu refugees returned to Myanmar in October, they “unambiguously asserted that Rohingya, believed to be ARSA fighters, were responsible,” Amnesty says. According to the rights group, this witness testimony was backed up by forensic analysis of 31 photos of exhumed bodies.

Amnesty added that it also documented ARSA’s involvement in other murders and attacks around Maungdaw township, the epicenter of the renewed violence.

ARSA has previously denied killing Hindus or attacking any civilians, but has not released a statement in several months. Social media accounts purporting to represent the militant organization have also gone quiet.

Amnesty called for an independent investigation to bring justice to all victims and survivors in Rakhine state.

“ARSA’s appalling attacks were followed by the Myanmar military’s ethnic cleansing campaign against the Rohingya population as a whole,” said Hassan. “Both must be condemned — human rights violations or abuses by one side never justify abuses or violations by the other.” 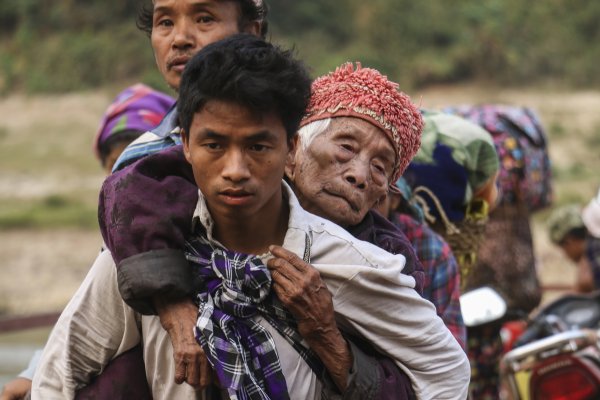 Thousands Continue to Flee Escalated Fighting in Myanmar's North
Next Up: Editor's Pick