On Tuesday, Prince Charles held a garden party for his 70th Birthday Patronage Celebration at Buckingham Palace in London. But all eyes were on Prince Harry and Meghan Markle, the newly-anointed Duke and Duchess of Sussex, following their May 19 royal wedding at Windsor Castle. Prince Harry and Markle made their first official post-wedding appearance for the garden party, giving their subjects and plenty of fans worldwide a glimpse at a day in the life of the newlyweds.

At the event, Prince Harry gave a heartfelt speech about his father’s “enthusiasm and energy,” alluding to the many charities he patronizes in the course of his royal duties, which the party was intended to celebrate. While delivering his remarks, however, Harry was understandably thrown a bit off course by a bumblebee that had the audacity to upstage a prince.

“Sorry, that bee really got me!” he deadpanned after taking a moment to collect himself mid-sentence, to the laughter of those at the party. “So Pa,” he continued, “while I know that you’ve asked that today not be about you, you must forgive me if I don’t listen to you, much like when I was younger.”

Harry was flanked on stage by his father, Camilla, Duchess of Cornwall and his new bride. Markle struck a demure tone in a dusty pink chiffon dress by Goat, Roboto, Oxygen-Sans, Ubuntu, Cantarell, ‘Helvetica Neue’, sans-serif;”> that hit below the knee, with a sheer, high neckline and sheer long sleeves. She paired it with nude pointy-toed pumps and a sleek hat set at a jaunty angle, her hair pulled back in a low bun. Markle and Prince Charles have shared a warm relationship recently, and he stepped in to join her for part of her walk through St. George’s Chapel after Markle’s own father had to miss the ceremony.

Prince Harry and Markle are expected to embark on a honeymoon at some point, but little is known so far about their finalized plans. When they wed in 2011, Prince William and Kate Middleton waited nearly two weeks before jetting off to the Seychelles. 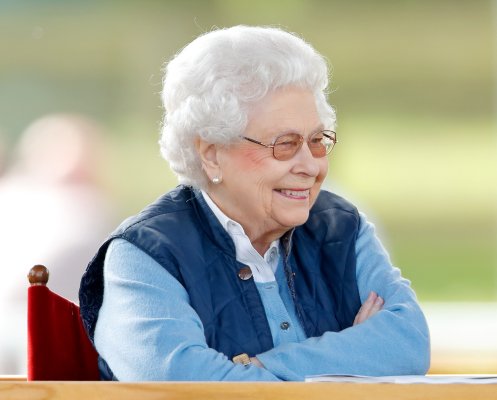 Queen Elizabeth Is Out Here Living Her Best Life at a Horse Show
Next Up: Editor's Pick