President Donald Trump speaks during a rally at Total Sports Park in Washington, Michigan, on April 28, 2018.
Mandel Ngan—AFP/Getty Images
Ideas
By Errol Morris
Morris is an Academy Award–winning filmmaker and the author most recently of The Ashtray (Or the Man Who Denied Reality).

How many times have I been asked: Is truth dead? Or at least, if truth as a concept has been hopelessly compromised? Many, many times. (Including by this very publication.) But truth is still with us and hasn’t been compromised — no matter how many people might insist that it doesn’t exist or is subject to endlessly diverse interpretations. There is one truth. Untruth, on the other hand…

The Washington Post recorded 3,001 false or misleading claims made by President Donald Trump in his first 466 days in office. Is this just political in nature? Is it fake news? A gross misrepresentation?

Consider Trump’s April 28 campaign rally in Washington, Michigan. As the Post summarized, throughout the course of his 80-minute speech, the President made a variety of false claims that ranged from stating that Henry Ford invented the assembly line; to asserting that Franklin Delano Roosevelt served as president for 16 years; to boasting that a 2016 rally saw an audience about four times as large as it actually did; to saying he has “essentially” gotten rid of Obamacare; to complaining that the U.S. loses “about $500 billion” because of its trade deficit with China, even though the appropriate figure is about $300 billion and a trade deficit is not a win-lose statistic.

It was a dizzying array of mistakes, lies and misrepresentations. We might distinguish these categories differently or think some worse than others. But properly speaking, this should not be considered a partisan issue. The truth is not a liberal plot. Truth stands apart from any political party and any kind of partisanship. The fact that anyone would think differently is in and of itself a cause for alarm. How much do we want to give up on? The shape of the Earth? The heliocentric universe? The pythagorean theorem? The structure of DNA?

Questions about alternative facts and relative truths have been nettling me for decades. When I was a graduate student at Princeton University in 1972, it had been ten years since the publication of Thomas Kuhn’s Structure of Scientific Revolutions. The book had made him famous. Not because people had read it carefully — I just don’t believe that — but because he came up with a number of notions that had a kind of general appeal. Principal among them was the “paradigm shift.”

You might ask, What in hell is that? Although I’m sure you’ve heard the term. Kuhn was arguing that science progresses in fits and starts. In normal science, a group of “practitioners” has settled on a way of defining and solving problems — a paradigm, a conceptual scheme. They have a way of looking at the world and are by and large happy with it. But then there are anomalies — things that don’t fit neatly into the conceptual scheme. One or two anomalies can perhaps be ignored, but as they accumulate they shatter the tranquility of the paradigm. Unexplained anomalies lead to a crisis; a crisis leads to a revolution; a revolution leads to a shift to a new paradigm. This seems okay on the face of it. But Kuhn’s claim was deeper and far more radical. He argued that as science changes, so does the world and so does our ability to comprehend the past.

Taken at face value, if Kuhn’s theories were correct, we could never adequately understand the past at all, since it is cloaked from our view by changes in meaning, paradigm shifts and the like. And even though his views were seemingly embraced, it’s not clear to me that anyone ever considered carefully the implications of those views. I would argue the implications are horrific, as bad as it gets. That in essence, they amount to a denial of truth and even a denial of reality.

You might think of Kuhn as espousing a kind of crazy idealist philosophy, and that’s what it is. We make the world up as we go along. It reminds me of the famous quote attributed to Karl Rove — though he’s denied saying it — at a time when George W. Bush was President of the United States: “We’re an empire now, and when we act, we create our own reality.”

I have very limited sympathy with these views. We can argue about the number of people who went to Trump’s inauguration, but would anyone seriously deny that there is a number and there is a reality to those events? What is so scary about the present time is that people believe that they can assert truth just by screaming louder than others or repeating themselves endlessly, like the Bellman in Lewis Carroll’s “The Hunting of the Snark”: “What I tell you three times is true.” But we all know in our heart of hearts that mere repetition and decibel level is no way to truth.

Part of the controversy hinges on the difference between “discovery” and “invention.” Do we invent the world or discover it? And the related question: Can we speak of a world outside of ourselves, or are we just conjuring phantasms in the prison of our minds? To me, science and mathematics are ultimately about undiscovered continents: things that really do exist, but we might not yet know about them. The example that I often use is trilobites in the Cambrian period, 600 million years ago. Did trilobites know the value of pi? I think not. Did any living creature in the Cambrian know the value of pi? No. But did pi exist with the same value that we know of today? Yes.

Truth is all around us. We just simply have to look for it. This task — figuring out where we stand with respect to truth, to the world around us — is mankind’s most noble activity and something that we should only give up on at our peril. 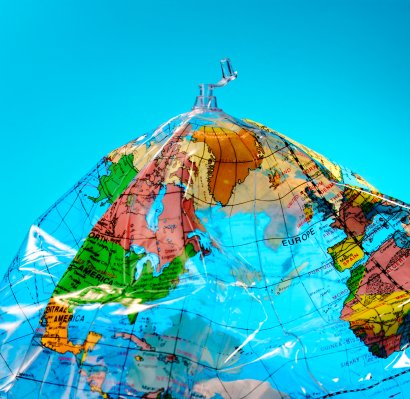 The False Promises of Protectionism
Next Up: Editor's Pick