As U.S. president Donald Trump prepares to sit down with North Korean dictator Kim Jong Un Tuesday in Singapore, it has emerged that the U.S. government has decided not to mention human rights at all during the talks.

In the past few days, Kim Jong Un and his murderous tyrannical regime have effectively been normalized, as they hang out in Singapore, enjoying the nightlife and even taking selfies with the country’s obsequious rulers. The media buzz continues to build about the possibility of “peace,” even as it has become clear that human rights will not be on the menu.

Read more: President Trump wants North Korea to give up nuclear weapons. Here’s just how hard that would be

The goal for the U.S. government is the denuclearization of the DPRK. For Kim, his goal is the international legitimization of his regime, and a loosening of the sanctions that make it difficult for him and his cronies to make profits. At this moment, it looks like Kim is going to win, while the best-case scenario for the U.S. is a drawn out process of negotiation and verification that ultimately will rely on trusting the word of a dictatorship that imprisons hundreds of thousands of its critics in a vast network of gulags.

In the past two months you have read endless hype about these “peace talks” and the possibility of a Nobel Peace Prize for Trump and South Korean president Moon Jae-in. But what you very rarely, if ever, hear about are the nightmarish daily lives of 25 million people in North Korea.

Imagine being a North Korean defector. You risked your life to escape hell on earth, and you miraculously made it to freedom in South Korea. And you watch your new democratically-elected leader, President Moon. But you see that instead of promoting human rights in North Korea and expressing solidarity with your cause, he treats your former tormentor Kim Jong Un to an ostentatious feast while your family starves. You look at the press photos and watch as Moon and his colleagues smile and seem to be so genuinely happy—victorious even—as they try to make amends with a tyrant whose atrocities were compared by a United Nations inquiry to those committed by Nazi Germany in World War II.

So far, we have read countless op-eds and heard dozens of takes about how “hopes are high” for the talks. It is strange to see so many prominent individuals who typically like to reason and make decisions with evidence—on issues ranging from climate change to how best to lift people out of poverty—throw that data-driven sensibility completely out the window when it comes to the Koreas.

At this point in 2018 we have two decades of strong evidence to suggest that the Kim dictatorship manipulates peace talks to strengthen and cement its brutal rule. Sometimes, like in the case of the inter-Korean summit in 2000—a result of the former South Korean President Kim Dae-jung’s ‘Sunshine Policy’ of engaging with the North—these talks can even rescue and bail out the regime when it is at a moment of internal weakness. Many forget that the Nobel Peace Prize awarded to South Korean president Kim Dae-jung in 2000 for bringing the Koreas together came after a payment of approximately $186 million to Pyongyang from Seoul when the Kim regime was close to economic collapse.

What’s more, the “peace talks” that we’ve seen in 2000, 2007, and now today are essentially a misnomer. They don’t aim to end the real conflict on the Korean peninsula—which unfolds north of the demilitarized zone (DMZ)—where the Kim dynasty wages an incredibly violent war against its own people every day.

We need to support the South Korean people – especially South Korean women – as they continue to wage a brave and admirable struggle for their justice and freedom. But we must acknowledge that – statistically speaking – virtually all state murder and violence committed on the Korean Peninsula during the past 25 years has taken place in North Korea. The Kim family dynasty has killed millions of people over the past two decades, and still keeps hundreds of thousands of North Koreans in concentration camps, while waging a nation-wide campaign of torture, rape, and murder.

But this is not a war that global powers are interested in ending; rather, the leaders of South Korea, the United States, Russia, China, and of course North Korea are all hoping to preserve the status quo. Perhaps most shocking yet to North Korean refugees and defectors is that beyond Kim traveling across the DMZ, the only tangible outcome so far from the Panmunjeom Declaration in April has been a crackdown on human rights activism in South Korea.

According to Kang Chol-hwan, author of Aquariums of Pyongyang and founder of the North Korea Strategy Center, the Moon administration has slashed funding for his Seoul-based organization and other defector groups. Moon has also stopped the peaceful and creative advocacy of defectors as they attempt to float leaflets with news from the outside world into North Korea via balloons, and he has dismantled speakers on the DMZ that were blasting information to the North Korean army on the other side.

For the DPRK, the peace talks are part of a broader strategy to legitimize its rule by distracting the world from its crimes through participation in high-profile international events like the Olympics.

Those pushing for a “lasting peace” on the peninsula should know that right now, their activism is being used by Pyongyang to continue terrible violence against its people. If you were a North Korean, would you want a permanent truce between your dictator and the South Korean government? Or would you want freedom and economic opportunity? The hard truth is that there will be no end to violence and no end to inequality on the Korean peninsula until the Kim family is gone and the North Korean gulags abolished.

If you can see how peace talks might be a mechanism for the Kim regime’s survival, and you consider (like me) an international conflict to be the worst possible outcome, then you might ask—what else can we do?

There is another option: to flood North Korea with information. The Human Rights Foundation does this with its Flash Drives for Freedom campaign, and there are many ways to get involved. The strategy is to get enormous amounts of technology and information into the hands of the North Korean people.

If enough North Koreans watch films, reads books, and consume news coming in through black markets on the Chinese border via USB sticks and smartphones, the regime’s brainwashing strategy will eventually fail. Our goal is to put the future of North Korea into the hands of its people. One possible outcome could be that the military and political elite surrounding the Kim family realize the full extent of the lies they are fed every day and say enough, deposing him and creating a new regime that might actually open the gulags and negotiate honestly with the outside world.

At this time of tension, the optimism surrounding the peace talks is understandable. But we can’t let it blind us to the reality that hundreds of thousands of North Koreans face each day in their concentration camps and torture chambers.

Rather than put your faith in Kim Jong-un and Donald Trump, consider believing in that flash drive sitting at home in your desk drawer. Loaded up with information, it could very well help open a window to the outside world for North Koreans, and pave the way to real, lasting peace and prosperity for everyone on the Korean peninsula.

Learn more about HRF’s efforts to send information into North Korea at FlashDrivesforFreedom.org. This piece was updated on June 11 to reflect recent events in the run up to the summit in Singapore. 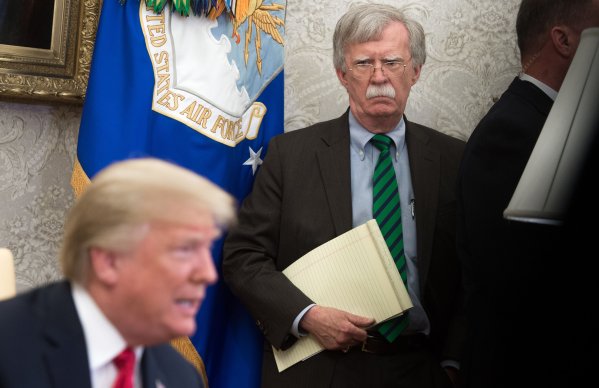 Are North Korea Nuclear Negotiations Hitting a Dead End?
Next Up: Editor's Pick