Who's Winning the Democrats' Civil War?

Stacey Abrams, a Democratic candidate for governor, stood outside her campaign headquarters in Atlanta on Saturday surrounded by her left-wing friends. A banner for the Bernie Sanders-inspired group Our Revolution hung next to her campaign sign, near placards for MoveOn.org and the abortion-rights group NARAL. “Join the Resistance,” a supporter’s T-shirt urged. The message from this rally hosted by an array of liberal groups seemed clear: A victory for Abrams in Tuesday’s primary would be a victory for the left in the war for the soul of the Democratic Party.

But is it really true that the Sanders wing is beating the Clinton wing in the battle for party dominance? Abrams, the former minority leader of the Georgia House of Representatives, is a proud liberal, and she’s widely expected to win. Yet she insists it’s not so simple. “I was a Hillary surrogate who has hired Obama folks and Bernie folks and Clinton folks,” she told me in an interview aboard her campaign bus. In the legislature, she points out, she worked with Republicans on numerous bipartisan initiatives. “I am absolutely a progressive,” she says, “but I would not say that I represent any wing of the Democratic Party except for the Democratic wing.”

As primaries have gotten under way in recent months, left-wing Democrats have surged past more moderate contenders in contests across the country. In Nebraska, a liberal social worker, Kara Eastman, won a surprise upset against Brad Ashford, a centrist former congressman backed by the Democratic establishment. In Pennsylvania, a Sanders-backed progressive defeated the state’s incumbent lieutenant governor, and two self-proclaimed Democratic Socialists beat incumbent Democratic state representatives. Candidates running to the left have also prevailed in primaries in Idaho and Oregon. A congressional runoff in Texas on Tuesday, pitting a progressive darling against Washington Democrats’ chosen candidate, could continue the trend.

These intraparty contests are significant because the quality of the candidates the Democrats nominate will help determine how successful they are in November’s midterm elections. One recent political-science study found that extreme candidates tend to fare worse than moderates in general elections by a 7-point margin.

But for every high-profile liberal success this election cycle, there have been plenty of moderate victories, too. The liberal former congressman Tom Perriello fell far short in his bid for the Virginia gubernatorial nomination, as did former congressman Dennis Kucinich in Ohio; a massive push by national liberal organizations to defeat an incumbent Illinois congressman, centrist Dan Lipinski, was also unsuccessful. In congressional primaries, the center-left group Third Way points out, less than one-third of Our Revolution’s candidates have prevailed. “I think we need to be careful about overstating this whole ‘progressive vs. moderate’ fight within the Democratic Party,” says the political analyst Amy Walter, who argues that primary voters may be looking less for ideology than for fresh faces, outsiders and women.

It’s tempting, amid the emergence of the left-wing movement activists call the Resistance, to see a mirror image of the Tea Party that arose after Barack Obama’s election in 2008. Just like the Tea Party, the Resistance is fueled by grassroots energy that can’t be controlled by a political party, and is sometimes directed at its own side. Both movements are motivated less by policy than by anger at a President its members see as illegitimate.

The Tea Party drove the GOP establishment nuts, toppling incumbent Republicans and nominating extreme candidates. It also provided the energy behind 2010’s massive Republican wave. And the Tea Party candidates who took on the GOP establishment often differed more in style than in substance with their foes; both sides considered themselves conservative.

In Georgia, Abrams is running in the Democratic primary against a fellow former state legislator, Stacey Evans, who argues that she’s better positioned to reach out to moderate and independent voters than Abrams. “We’re running to be governor of Georgia – we should be able to talk to all of Georgia,” Evans told me at a campaign stop in an urban Atlanta cafe.

But in the primary, Evans isn’t exactly running to the center; in fact, she’s attacked Abrams as being insufficiently progressive. Abrams, she argues, sold out Democrats when she did all those deals with Republicans.

This jockeying for the leftist mantle, even in a Democratic primary, is something new, says former Georgia state senator Vincent Fort, an Evans supporter and former Sanders delegate.

“I’ve been around a long time, and this is the first time in the history of this state that Democratic candidates are competing to be the most progressive,” Fort told me. Just as the Tea Party’s main effect on the GOP was the way it dragged the party’s center of gravity to the right, the Resistance may be pulling the entire Democratic Party in its direction. 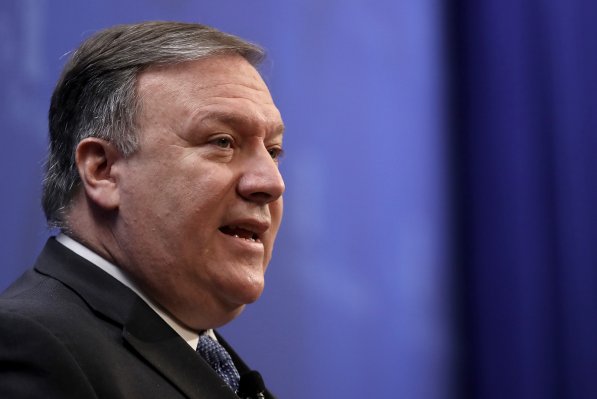 Iran Rejects ‘Strongest Ever Sanctions’
Next Up: Editor's Pick