Iraq Just Got Its Own Version of Donald Trump

A small vehicle drives past a poster of Shiite leader Muqtada al-Sadr in Sadr City, east of the Iraqi capital Baghdad on May 14, 2018.
AHMAD AL-RUBAYE—AFP/Getty Images
Ideas
By James Muldoon and Yasamin Alttahir
James Muldoon is a lecturer in political science at the University of Exeter, U.K., and is the editor of 'Trumping the Mainstream: The Conquest of Democratic Politics by the Populist Right.'
Alttahir is an Iraqi-born Middle-East expert based in London. She has worked on projects in Baghdad and Kabul.

He has been described as an impulsive, narcissistic egoist who lives in the shadow of his father. He’s also a populist, a political outsider who has hurtled to political power thanks to a surprise election win. This is not a description of U.S. President Donald Trump, but rather of cleric Muqtada Al-Sadr, whose political coalition recently won Iraq’s parliamentary election.

The election on May 12 was the first since the defeat of the Islamic State militant group and the failed Kurdish bid for independence from Iraq last year. These two successes for Baghdad raised expectations among the country’s political establishment of victory at the polls.

The final results announced early Saturday gave Al-Sadr’s bloc 54 seats, more than any other group but still falling short of a majority in the 329-seat Parliament. (Now begins the complex process of building a coalition government.) The success of the militant-turned-populist preacher—who ran on an ‘Iraq First’ style campaign—represents a fundamental shift in Iraqi politics and is cause for grave concern among ordinary citizens who have suffered years of dictatorship, sanctions and consecutive wars. The average Iraqi living outside Baghdad still can’t reliably switch on a light or run a shower, let alone find a job with a living wage paid on time or attend a decent school.

Al-Sadr’s electoral victory is indicative of the Iraqi people’s rejection of self-serving Western intervention in the country. While the West has been preoccupied with gaining political influence, a real opportunity has been squandered to foster a culture of democracy and respect for human rights. The Iraqi people are now fed up with a lack of progress on addressing poverty, corruption and the need for essential services.

The parallels between Trump and Al-Sadr are uncanny. Take the circumstances of their election. Like the American president, Al-Sadr has been elected as a populist, nationalist candidate who ran as an anti-establishment champion of the common man. He framed his political opponents as out-of-touch, Western-influenced elites, removed from the everyday struggles of average Iraqis.

Supporters of Iraqi Shiite cleric Muqtada al-Sadr celebrate the results of the parliamentary election at the Tahrir Square, Baghdad, Iraq, on May 13, 2018.
Murtadha Sudani—Anadolu Agency/Getty Images

However, in Iraq, the election had record-high abstentions and a voter turnout of just 44.52 percent, the lowest since the first multiparty elections of 2005. The lower than expected turnout is another sign of people’s frustrations with the government and the democratic process.

Al-Sadr has benefited from this rising wave of discontent with Baghdad’s broken political system. Much like Trump’s promise to “drain the swamp,” Al-Sadr vowed to reduce corruption, fight foreign interference and deliver political and economic reforms for ordinary Iraqis. Ironically, both anti-establishment figures embody the characteristics of the “elite” they claim to oppose. Just as Trump is, in fact, a well-connected billionaire, Al-Sadr descends from one of the most influential political families in Iraq and has been a fixture of Iraqi politics for the past decade.

Al-Sadr has also made questionable alliances, embracing the Iraqi Communist Party and Saudi Arabia’s Mohammed bin Salman, angering Iran and the U.S. This reveals an opportunistic mindset similar to that demonstrated by Trump in his foreign policy decisions.

But unlike Trump, Al-Sadr is a confirmed warlord. His Mahdi Army, now revived as the Peace Companies, has been responsible for some of the worst atrocities in recent Iraqi history. Al-Sadr also exists in a far more fragile political system, more vulnerable to instability and collapse. His electoral victory represents a backward slide for democracy in Iraq and the stability of the Middle East.

The past 10 years of Muqtada Al-Sadr’s influence over Sadr City, an administrative district in Baghdad, provide some indication of the possible future direction of Iraqi politics. Most troubling is his willingness to use violence to achieve his goals and his disregard for the democratic process. He opposed the U.S.-backed Interim Governing Council established after Saddam Hussein’s fall and attempted to establish a rival government. He has previously questioned the efficacy of peaceful protest and has urged his followers to terrorize his enemies.

The sincerity of Al-Sadr’s attempt to rebrand himself as a nationalist unifier will only be visible with time. As a conservative religious cleric, he has been largely opposed to women’s participation in politics and his followers have been violently intolerant of the LGBT community. The protection of minorities would be in question, since his Mahdi Army has played a key role in fueling Iraq’s sectarian conflicts. His continued success may embolden Shiite factions to oppress Sunni and Christian minorities.

On the international front, Al-Sadr’s victory mirrors the rise of populist and authoritarian leaders across the globe. His surprise win poses a grave danger to the respect for human rights and democratic culture. And it’s a worrying sign for moderates and progressives hoping for a more secular and pluralist Iraq. 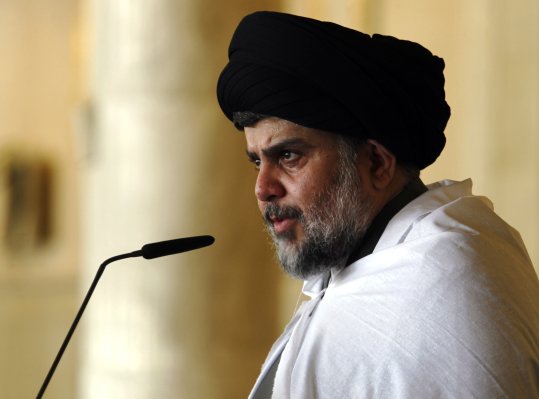 Firebrand Cleric Could Become Kingmaker in Iraq Elections
Next Up: Editor's Pick