Tina Fey hosted the star-studded 43rd season finale of Saturday Night Live and she was in good company. More than a dozen other famous comedians, actors and celebrities joined her for the season’s final episode.

SNL’s opening was reliably a Trump skit that riffed on The Sopranos, with Alec Baldwin as Trump sitting in a diner just like the one on the finale of the HBO series. Baldwin as Trump was joined by Kate McKinnon as Rudy Giuliani, who boasted about being his lawyer — “I told them you were openly colluding with Russia,” McKinnon says, “and then I said, ‘So what?’”

Robert De Niro played special counsel Robert Mueller and Ben Stiller played a forlorn Michael Cohen, who lamented that he was having a really bad day and “mostly just preparing to go to jail and stuff.”

Another politically charged skit included Fey reprising her always-memorable impression of Republican politician Sarah Palin, joking, “One minute you’re on top, and then you’re gone in the blink of a Scaramucci.” SNL cast member Aidy Bryant sang a song as Sarah Huckabee Sanders while the rest of the cast, portraying others connected to Trump, reminisced about what they had done for him : Kate McKinnon was Kellyanne Conway, Cecily Strong was Stormy Daniels and Leslie Jones was Omarosa Manigault Newman.

SNL poked fun at itself during Fey’s monologue, in which she took questions from the audience, notably one from Jerry Seinfeld who asked: “Do you think the show has too many celebrity cameos these days?”

Other celebrities who made cameos in the opening monologue and answered audience questions were Benedict Cumberbatch, Anne Hathaway, Chris Rock, Fred Armisen and Donald Glover.

Hamilton creator Lin-Manuel Miranda also showed up, acting in a short skit with Fey making fun of her Mean Girls Broadway musical, and writing her name down in his “burn book,” while executive producer Lorne Michaels made a rare appearance in the skit as himself.

Of course, SNL had a royal wedding skit, in which Cecily Strong played Kate Middleton joking, “The past six years I’ve been pregnant, so I’m goin’ hard tonight.” 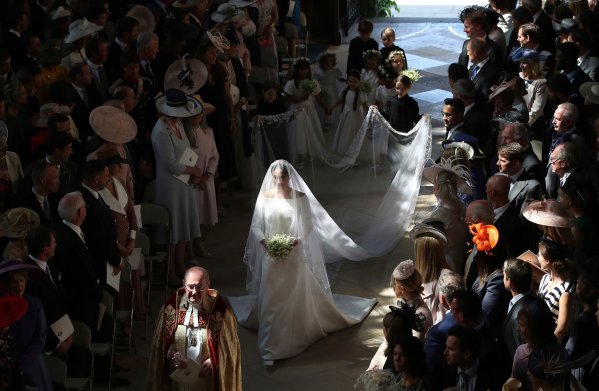 Why Harry and Meghan's Wedding Was a Meaningful Step Forward for the Monarchy
Next Up: Editor's Pick