'Today Showed The World Anyone Can Be A Princess.' Windsor Crowds React to Royal Wedding

Crowds were buzzing in Windsor after the royal wedding, particularly the powerful sermon given by African-American bishop Rev. Michael Curry on the power of love and the various elements of the ceremony that celebrated Meghan Markle’s heritage.

Two friends who had traveled to Windsor from the U.S., Raven Debose and Melanie Felton, described the service as “very black American.” “If you visit a black church in the south with a preacher, they will preach for at least an hour,” Debose, who is originally from Georgia but now lives in Texas, told TIME. “When they get going they like to talk and talk and talk!”

Felton, who is from Atlanta but now lives in Cleveland, agreed with her friend. “We sat down when [Rev. Curry] started as we knew it would be a while. We could see the Queen looking confused!”

The pair met in Atlanta but hadn’t seen each other for a decade. Over the past 10 years they have communicated mostly on social media, where they discuss one of their biggest passions: the British royal family. When Prince Harry and Meghan Markle announced their engagement, Debose and Felton planned a trip to Windsor together.

Raven Debose and Melanie Felton in Windsor following the marriage ceremony of Prince Harry and Meghan Markle, on May 19 2018.
Kate Samuelson–TIME

“The whole ceremony was beautiful—had a tear in my eye the entire time,” said Debose. “Whenever Meghan’s mother appeared I cried. Seeing her daughter all alone and then being walked down the aisle by Prince Charles must have been such an emotional moment. She is a yoga teacher and social worker and now her daughter is marrying a prince.”

Both Debose and Felton felt touched by the poignant nods to Markle’s African-American roots during the service. “I couldn’t believe there was a Baptist choir—that was beautiful,” said Felton. “Hearing ‘Stand by Me’ was an amazing moment too.”

“Today really showed the world that anyone can be a princess,” added Debose. “Their relationship was a fairytale at first, but now it’s real. When you think that Meghan Markle is divorced, an actress and biracial, today shows that none of that matters—when you’re in love, you’re in love.”

Long-term royal fan Terry Hutt, 83, in Windsor following the wedding of Prince Harry and Meghan Markle, on May 19 2018.
Kate Samuelson—TIME

It wasn’t just American fans of the royals who felt moved by the ceremony. Terry Hutt, a Brit and long-time fan of the royals, described the service as “fantastic.” “Today I saw what I came to see: a lovely couple get married,” he added.

In an interview with TIME that was repeatedly interrupted by members of the public asking Hutt, who was wearing a Union Jack suit, for a photograph, the 83-year-old explained that he had been camping out in Windsor for five days. “I’ve been sleeping on a roll-up bed underneath a cafe right by Windsor Castle,” he said. “I wanted to get the top spot.”

Hutt has spent 79 years following the royal family and first met the Queen in 1940, during the Second World War. The octogenarian said he is a enormous fan of Harry and Meghan, and what they represent. “Their relationship is simple: they went out and met each other and fell in love,” he said. “They’re breaking the rulebook, but in a nice way.”

Pamela Anomneze, 52, from Haringey, pictured at Studio 360 Collective in north London, who received an invitation to the wedding of Prince Harry and Meghan Markle at Windsor Castle. April 10, 2018.
WPA Pool—Getty Images

Pamela Anomneze was one of the 1,200 members of the public invited by Harry and Meghan into the grounds of Windsor Castle to celebrate the historic day. Anomneze, who was born in Nigeria, received an invitation because of her work supporting people with mental health issues in Haringey, north London.

“I thought the order of mass was absolutely gorgeous,” she told TIME over the phone from the grounds of the castle. “I liked the preaching and how he spoke about love.”

Anomneze watched the service on a big screen in the grounds with her 15-year-old son, Jude, as well as the other invited guests. “The atmosphere was so good—I now feel so relaxed, joyful and elated,” she said. “We caught sight of every royal family member—and even Elton John.”

But for Jude, a huge Suits fan, nothing was more exciting than glimpsing some of his favorite cast members in the flesh. “Out of all of them, seeing Meghan was the best of course!” 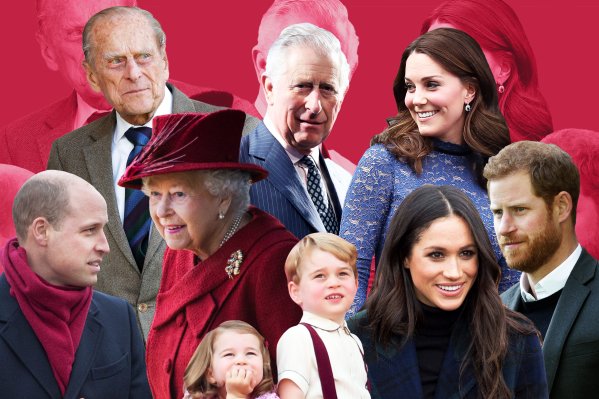 Your Complete Guide to the British Royal Family Tree and Line of Succession
Next Up: Editor's Pick