In an interview with CNN’s Chris Cuomo Friday morning, the former New York City mayor was asked if the president can be found to have obstructed justice under the law.

That contradicts an position taken in December by Trump attorney John Dowd, who has since left the legal team, that a president “cannot obstruct justice because he is the chief law enforcement officer.”

It’s an important legal question as special counsel Robert Mueller’s team starts its second year of investigations into Russian meddling in the 2016 election. Some Trump critics argue that the president’s firing of FBI Director James Comey, among other actions, could be seen as obstructing an agency investigation.

The federal obstruction of justice statute provides that “whoever … corruptly or by threats or force, or by any threatening letter or communication, influences, obstructs, or impedes, or endeavors to influence, obstruct, or impede, the due administration of justice, shall be (guilty of an offense).”

There are two schools of thought on the first question.

Many legal experts say that yes, presidents can obstruct justice just as any other citizen can. “The president is not above the law,” Fordham University School of Law Professor Jed Shugerman told TIME in December. “The president has all kinds of constitutional powers, [but] he still has to obey the law in the use of those powers. Those powers still have to be legal in intent.”

“There is no express grant of immunity under the Constitution to protect the President who commits a felony,” former Obama Administration White House counsel Bob Bauer told CNN. “Those who have argued for it have to cobble together their case primarily out of a concern about the debilitating effects of a President in legal trouble on the conduct of government. But they have a high burden to carry in claiming that the President charged with faithful execution of the law is above it. It simply contravenes basic understandings about the rule of law in the constitutional order.”

Harvard law professor Alan Dershowitz cautioned against the view that Trump has obstructed justice, however, telling Fox News last year, “For obstruction of justice by the president, you need clearly illegal acts.”

He argued that Trump firing former FBI Director James Comey and weighing in on Justice Department cases, both issues often cited in talk of an obstruction case, are both well within his constitutional powers as president. (Trump has appeared to suggest he knew at the time he fired former national security advisor Michael Flynn that Flynn had lied to the FBI, which some argued would bolster an obstruction case.)

“There’s never been a case in history when a president has been charged with obstruction of justice for merely exercising his constitutional authority,” Dershowitz said. “That would cause a constitutional crisis in the United States.”

Dowd’s point may have been just that, that in this case, Trump remains within the bounds of his constitutional authority. But he seemed to be going further, arguing as the chief law enforcement officer in the nation, Trump is structurally protected from being able to obstruct justice. This line of reasoning echoes President Nixon’s famous line, “When the president does it, that means it is not illegal.”

Nixon stands as an example of a president who did commit clearly illegal acts that led Congress to say he had obstructed justice. The first line in the Articles of Impeachment brought against Nixon in 1974 says he “has prevented, obstructed, and impeded the administration of justice.”

That gets to the second question on this issue. Even if there is evidence that a president has obstructed justice, can he be prosecuted for a crime while in office? That’s a constitutional question, and there isn’t a clear answer. It has never happened before, and no court has definitively ruled on the issue. (The Supreme Court heard arguments about it in 1974 about Nixon, but never resolved the question.)

Giuliani told CNN earlier this week that special counsel Robert Mueller’s team has determined that they cannot indict a sitting president. “All they get to do is write a report,” Giuliani said.

Under this interpretation, Trump would have to resign or be impeached first, and then could be criminally charged afterwards. In that case, if Mueller or the Senate finds that Trump has obstructed justice, they would bring their findings to the House. Then the real question would become not whether the president obstructed justice, but whether his actions warrant “high crimes and misdemeanors” worthy of impeachment.

In that case, the president may not need to be guilty of an actual obstruction of justice crime to lose his place in the White House. “Impeachment does not have to be on regular statutory crimes,” Shugerman points out. “The founders intended ‘high crimes and misdemeanors’ to apply to general abuses to power … Even if one concluded that there is no felony for obstruction of justice, that still would not prevent the House from finding it was a high crime.” 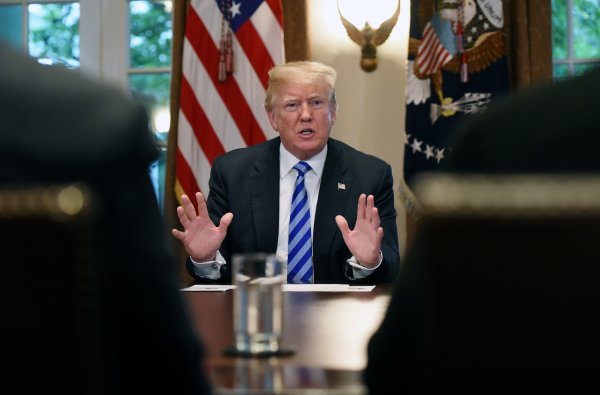 Trump Suggests FBI Had 'Embedded Informant' in Campaign
Next Up: Editor's Pick