How Drones Are Helping Scientists Study and Protect Endangered Whales

The above video was provided by Intel.

Just such a don’t-look-down moment played out off the coast of the Hawaiian island of Kauai in 2016. Ordinarily, it would have been the kind of experience that the paddleboarder—who came through unharmed—would have described to his friends with a helpless “You should’ve seen it.” As it happens though, his friends did see it, as did more than 200 million people so far on Facebook, YouTube and uncounted other websites around the world.

It was thanks to Jordan Lerma, a self-taught marine scientist and drone pilot living in Hawaii, that the encounter was preserved at all. In the past few years, Lerma has captured a lot more scenes like that one, building a following on Instagram and elsewhere both as a photographer and videographer with a keen eye for nature, and as a pioneer in the use of drones to study whales and to protect them from extinction.

“The work takes patience,” he says. “You have to be able to predict the behavior of the whales and of the drones, but it’s worth the effort.”

Lerma, 26, who was born in Hawaii and briefly worked in finance in San Francisco before moving back home, tumbled for drones before he tumbled for whales. But when you’re living in the middle of the Pacific in the direct path of whale migration routes, it’s not hard to put the two together. The problem was, while there are long-established techniques for photographing birds and chimps and big cats in the wild, there wasn’t much of a manual for using a new technology to capture an extremely elusive quarry. So Lerma worked out his own.

He begins by studying depth charts made available by the National Oceanic and Atmospheric Administration (NOAA), and comparing them to known whale behavior, looking for the likeliest places particular types of whales might congregate. Then comes the part that requires the patience: he stands on shore, drone at the ready, scanning the water with binoculars. Whales, as it happens, are not shy about coming close to land, which is a good thing. The range of a typical drone is only two to three miles, but Federal Aviation Administration rules require pilots to maintain visual contact with their flying bots at all times—and line of sight, even with binoculars, is limited to only about 1.5 miles.

When Lerma spots the telltale spouting or breaching of a whale, he launches his drone in a hurry. But he waits until he actually reaches the animals before he decides whether or not to swoop down and film them. Solo whales he leaves alone. “This is usually a traveling behavior and the whales will surface only every 10 to 20 minutes,” Lerma says.

Groups of whales spend more time at the surface and make for much more dramatic imagery. Mothers and calves make for the best footage of all. “The calves are extremely playful,” Lerma says. “And the mothers are very serious, constantly looking for danger.”

To make sure the whales do not see him as one of those dangers, Lerma never flies lower than about 100 ft. That minimizes any risk of contact between whale and drone, and reduces the likelihood that the whales will be disturbed or alarmed by the buzzing overhead. Multiple analyses of video recordings conducted by the U.S. government as well as by researchers in Canada, Switzerland and elsewhere seem to establish that marine animals do not notice drone noise. One clip did appear to show a dolphin reacting to the presence of a drone, but the problem may have been the aircraft’s shadow, not the sound it made.

Much more practically — if much less aesthetically — scientists have also begun using drones to perform a whole new kind of health checkup on whales. It’s awfully hard to dive into the ocean and draw a bit of blood or take a tissue sample from a passing whale. But it’s also unnecessary, because whales give away more than enough biological samples of themselves all the time. Every time they breach and spout, they’re spraying not just sea water into the air, but a generous helping of whale mucus.

The ocean advocacy group Parley, working with Intel, has developed a drone equipped with petri dishes that flies through such whale spray, collects whatever samples it can get, and brings them back to a research vessel for analysis. Called the Parley SnotBot (because, really, what else would you call it?), the drone, in combination with Intel’s data analysis software, allows investigators to examine the whales’ hormonal makeup, the level of contaminants like mercury and chromium in their systems, and even whether they have borne young. Intel’s machine learning and modified facial recognition software also allow the drone to recognize a particular whale’s fluke print, a pattern of nicks and other imperfections in a tail fin that are as personal as a human’s fingerprint. That in turn provides new insights into whale population counts and migration routes.

Parley is not the only group that sees power in SnotBot science. Lerma is now a full time employee with the Cascadia Research Collective, a nonprofit ocean conservation group that is looking to acquire similar technology to expand its own studies. “We are moving towards using drones with false killer whales,” Lerma says. “These animals are critically endangered in Hawaii and we are excited to see what insights we can unlock with this new view.”

Whales, like tigers and pandas and eagles and gorillas, have always had an edge over other endangered animals. As so-called “charismatic mega-fauna,” they already have our attention and affection. Humans are a very visual species, however, and animals we can see are animals we care for even more. When it comes to whales, drones and the people who pilot them are helping provide us that vision. 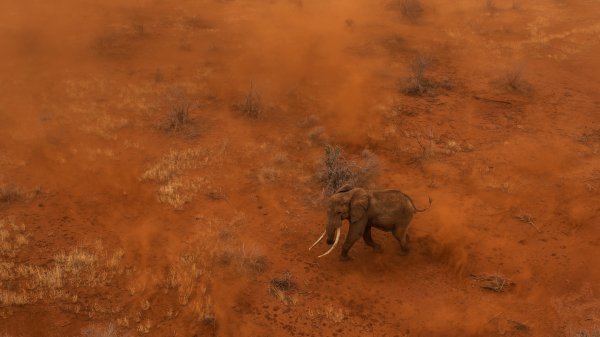 Drones Are Helping Catch Poachers Operating Under Cover of Darkness
Next Up: Editor's Pick