Three people have been arrested in Nigeria after at least two students were tied to makeshift crucifixes and flogged with horsewhips — an alleged punishment for being late.

The school’s principal was one of the three taken into custody after police encountered the incident on a roadside in southwestern Ogun state, the BBC reports.

Photos appear to show a boy and girl tied to wooden crosses with green string. A police spokesperson described the incident in Ayetoro, 90 miles north-west of Lagos, as “a barbaric act.”

An officer, identified as Livinus, came across the scene and called for back-up after the school’s owner tried to stop his attempts to intervene.

“When I tried to untie the pupils, the proprietor and his teachers beat me up,” said the officer, according to Nigerian newspaper Punch. “Before I returned from picking handcuffs from my car, they had grabbed a friend who was with me… and beaten him up with a horsewhip.”

The suspects include the school’s principal, owner, and a teacher, police confirmed to the BBC. 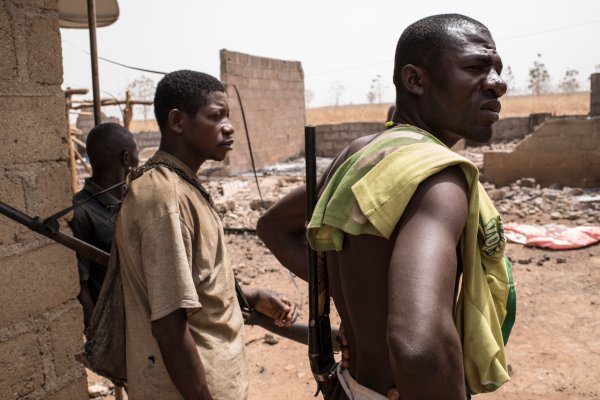 Fighting Between Militia and Bandits Kill 45 in Nigeria
Next Up: Editor's Pick