Retired soccer star Abby Wambach delivered the commencement address to the Barnard College class of 2018 on Wednesday, speaking about the challenges in her career and her fight against the gender pay gap.

“Like all little girls, I was taught to be grateful. I was taught to keep my head down, stay on the path, and get my job done. I was freaking Little Red Riding Hood,” Wambach said, referencing the lessons of the fairy tale. “The message is clear: Don’t be curious, don’t make trouble, don’t say too much, or bad things will happen. I stayed on the path out of fear—not of being eaten by a wolf—but of being cut, being benched, losing my paycheck. If I could go back and tell my younger self one thing, it would be this: ‘Abby, you were never Little Red Riding Hood, you were always the wolf.'”

Wambach — the world’s all-time leading scorer in soccer — helped lead the U.S. Women’s National Soccer Team to victory in the 2015 World Cup, before announcing her retirement from the sport.

“Doesn’t it feel like the second you figure anything out in life, it ends and you’re forced to start all over again?” Wambach said Wednesday. “Experts call these times of life, ‘transitions.’ I call them terrifying.” 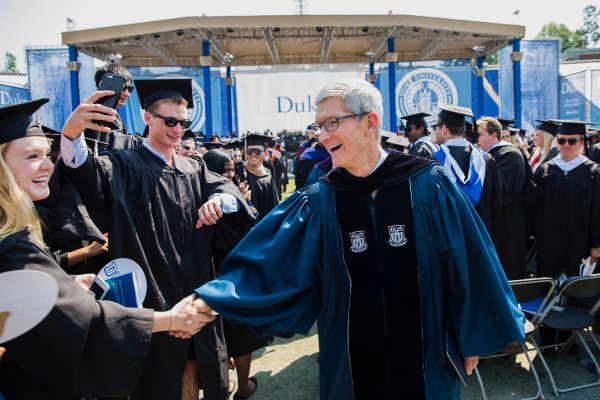