Hawaii's Kilauea Volcano Just Erupted From Its Summit and Sent Ash 30,000 Feet in the Air: The Latest

Hawaii’s Kilauea volcano erupted from its summit on Thursday, sending a plume of ash 30,000 feet into the air.

The Kilauea eruption is the latest since the Hawaii volcano began spewing ash and lava earlier in May, as fissures opened up along the volcano. Volcanic gas and lava emissions from Kilauea, one of the world’s most active volcanoes, have destroyed at least 37 homes and forced about 2,000 people to evacuate. Hawaii issued a red alert on Tuesday after the volcano sent a plume of ash about 12,000 feet into the sky, indicating a major eruption was imminent.

Hawaiian officials are now warning those on the Big Island in the path of the ash plume to seek shelter as the ash above Kilauea moves southeast with the wind. Here’s what to know about Kilauea’s latest eruption.

The ash plume came from an explosive Kilauea eruption at about 5 a.m. local time

The U.S. Geological Survey said an explosive eruption at Kilauea volcano about 5 a.m. local time sent the column of smoke and ash into the sky. Hawaiian Volcano Observatory and Hawaii National Park staff members were evacuated ahead of the eruption, according to the USGS.

A timelapse video shows how the eruption unfolded, starting from Wednesday afternoon.

The Hawaii County Civil Defense Agency issued a warning to those in the pathway of the Hawaii volcano ash plume, saying people should shelter in place. Residents were told to stay indoors with the windows closed and listen for updates on the radio. Those who were driving were encouraged to proceed with caution or pull over, and keep the windows closed, since driving conditions may be dangerous due to low visibility.

The USGS says activity near the Kilauea volcano can become more explosive at any time, including intensifying ash production and sending out ballistic projectiles near the vent.

The National Weather Service issued an ash advisory, and several schools were closed due to elevated levels of sulfur dioxide, which can increase the risk of bronchitis and respiratory infections.

Free masks were being provided Thursday for those within the impacted area to help filter the ash, but the Hawaii government’s website says that masks should be limited to one per family to ensure universal access.

The Federal Aviation Administration also extended aircraft restrictions around the mountain’s summit, but the Big Island’s two largest airports were not affected, the Associated Press reports.

Scientists say the eruption could last for weeks

The explosion followed days of pressure buildup as lava flowed out of fissures near the volcano.

Experts said they couldn’t be sure how long the eruption would last — it could be as long as weeks.

“It would be anybody’s guess why it changed behavior in the last few weeks as it dramatically did,” said volcanologist Erik Klemetti of Denison University in Ohio.

Kilauea has been erupting continuously since 1983. In 1924, the volcano produced more than 50 explosions like Thursday’s over more than two weeks, leading to one fatality.

Geologists said the latest explosion, which produced the 30,000-ft plume of ash, could become more violent, projecting boulders up to 1 mile away or pea-sized fragments as far as 4 miles.

Kilauea’s crater is located inside the National Park. The park has remained closed since May 11. According to state officials, the explosions and eruptions out of the volcano should not be deadly if people stay out of the park. 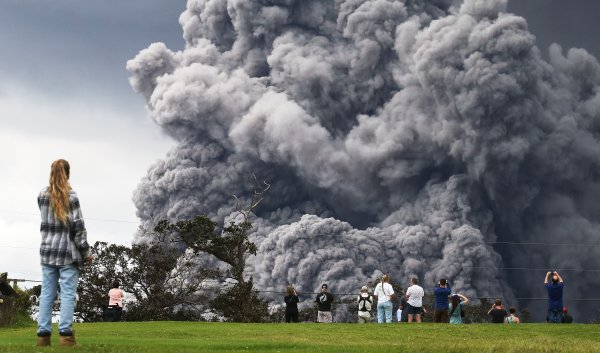 Hawaii's Big Island on 'Red Alert' After Ash Cloud Bursts From Kilauea
Next Up: Editor's Pick