Azza Soliman is part of Amnesty International’s Brave Campaign, which calls for the recognition and protection of human rights defenders around the world.
Ahmed Fouda—IN-LIGHTING
Ideas
By Azza Soliman

Soliman is part of Amnesty International’s Brave Campaign, which calls for the recognition and protection of human rights defenders around the world.

Movements like Me Too and Time’s Up have put women’s rights firmly back on the agenda. But away from the spotlight, there are many other girls and women who are risking their lives to demand an end to sexual violence, harassment and inequality. Just recently, Egyptian activist Amal Fathy was arrested for posting a Facebook video in which she shared her experiences of sexual harassment.

But women in Egypt refuse to be silenced. One of these unsung heroes is lawyer and founder of the Center for Egyptian Women’s Legal Assistance Azza Soliman. Azza risks her own safety and freedom to defend survivors of sexual violence in Egypt.

I’ve been arrested and interrogated for doing my job: defending survivors of abuse in Egypt.

There is no comprehensive law covering all forms of sexual violence in Egypt. Many people believe that the blame lies with the girls and women involved, rather than the perpetrator, and survivors face shame and stigma.

The lack of clarity around what constitutes harassment or assault has created a culture where girls and women are afraid to speak out. With female police officers few and far between in Egypt, women’s experiences often stay shrouded in silence—the idea of reporting harassment or rape to a male officer is too intimidating for many women.

Now, the global #MeToo and Time’s Up campaigns are slowly changing the way girls and women speak out about violence in Egypt, and helping women break the silence. Witnessing women from different backgrounds, countries, and statuses speak out has given many Egyptians the courage to slowly share their experiences anonymously or under their names. They’ve even created an Egyptian equivalent to #MeToo on social media called “Ana Kaman,” a direct translation. Women, in Egypt and elsewhere, felt that they are not alone and that they are strong.

However, if we want to ensure this movement truly makes a long-lasting difference, we have to invest in it. We need to make it easier and safer for women to report incidents of sexual violence. Tools need to be put in place to ensure that allegations are impartially and effectively investigated, and that those reporting them are protected.

As a lawyer, and as a woman committed to defending human rights, I want to make sure girls and women have a safe space to speak out. It’s an issue I’ve been working on for many years. Believe me when I say, it’s not been an easy fight and, for me, it’s one that’s had difficult repercussions.

I have been defamed by the media. I’ve faced criminal charges. I was accused of damaging the image of Egypt by spreading “false news” of sexual harassment and rape. I had my picture published in a state-affiliated newspaper attacking my marital status and accusing me of “encouraging women to know their rights and seek divorce.”

I’m currently under a travel ban and I’ve had my assets frozen, as I’ve been accused of receiving foreign funds that will harm the image of Egypt and the national interest of my country. Yet I refuse to give up hope, because there’s still plenty of work to be done.

Going forward, I hope survivors of violence will be able to safely report crimes with the knowledge they will be protected by the state. We also need specific laws to be put in place to combat domestic violence in Egypt.

The struggle to enhance and support women and human rights is long and tiring, but I refuse to give up the fight. I know I am not alone. During some of my most difficult moments, I’ve been encouraged to keep going. Through Amnesty International’s Write for Rights campaign, I received hundreds of letters of support.

We all have the same goal, to support women and girls in Egypt and build our dream of a fair and equal society, free from violence, so it’s inspiring to see new generations taking the torch and leading the way to a better future. There’s power in people, and with the support of so many, I know change is possible.

On May 19 and 20, BRAVE:Edit a collaboration between Amnesty International and Wikimedia, will see hundreds of online activists from countries across the world taking to the popular website to upload biographies of women human rights defenders and share the stories of inspirational women, such as Azza, who have faced up to untold obstacles and discrimination in defence of human rights. 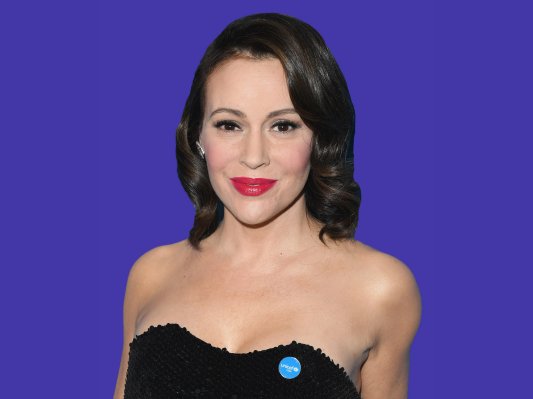 Alyssa Milano: How I Came to Terms With My Anxiety Disorder
Next Up: Editor's Pick