The last time a member of the British royal family announced his intention to marry an American divorcée, there was a constitutional crisis and the future of the monarchy seemed to be in doubt; indeed Edward VIII had to give up his throne in order to marry the woman he loved, Wallis Simpson. When she began her affair with the Prince, Simpson was married to her second husband Ernest Simpson, whom she would divorce two years later. Her nationality and her marital career made her unacceptable as a royal bride to almost every section of society. The diarist Harold Nicholson remarked at the time, “the upper classes mind her being an American more than they mind her being than divorced. The lower classes do not mind her being an American but loathe the idea that she has had two husbands already.”

Perhaps the British might have accepted a commoner, and at a pinch an American. But a woman who had been married twice before marrying the man who was also Supreme Governor of the Church of England was completely beyond the pale. The Archbishop of Canterbury, the most senior cleric in the Anglican church, said in 1935 that no Christian could marry again while their ex-wife or husband was still living. Couples who had been divorced could not be received at court.

How times have changed. In the vast coverage of the relationship between the American divorcée Meghan Markle and Prince Harry there has hardly been a ripple of disquiet that Meghan has been married before. Divorce is no longer considered a stigma in Britain, either to remarriage or to being received into the royal family. Three of the Queen’s four children have broken marriages. When Prince Charles married Camilla Parker Bowles in 2005, they had a civil ceremony followed by a blessing in St. George’s Chapel, Windsor Castle, because they had both been divorced. Thirteen years later Meghan, a convert to Anglicanism, has been given dispensation to have a full church wedding in the same chapel. Perhaps Charles’s wedding was more sensitive because so many of his subjects remembered his first wedding to Lady Diana Spencer and the couple did not want to draw unfortunate comparisons in the public’s mind. But the ceremony on May 19 should prove once and for all that divorce is no longer an obstacle to the nation’s desire for a full-on fairytale royal wedding.

One of the most striking things about Meghan is that at thirty-six, she is the same age as Harry’s mother was when she was killed in a car crash. Diana married when she was only twenty. Then, it was considered essential that a royal bride should be a (literally) virginal youth, and not much thought was given to the age gap of thirteen years between bride and groom. Meghan is not only three years older than her husband-to-be, she is a fully-formed adult who has already had a successful career. The British royal family have long been fond of actresses; Charles II made Nell Gwyn his mistress, and Edward VII had an affair with Lillie Langtry while Prince of Wales. But in each case, there was no question of marriage. Until relatively recently, acting was not considered a respectable profession. Now it seems to be the ideal training ground for prospective royal brides.

One of the reasons that Meghan has settled so quickly into royal life is that she already knows what it’s like to look down the barrel of a dozen telephoto lenses and smile as if she hasn’t a care in the world. Anyone who has worked the red carpet for years will be inoculated against the spiteful tabloid comments about a glimpse of cellulite, or a stray gray hair. Not many civilians can adjust seamlessly into the rigors of working for ‘The Firm’, as the Royal Family is sometimes nicknamed. But as a successful television actress, Meghan already knows what it is like to be in the public eye, and how to say the same thing over and over again as if she means it. Kate Middleton had nearly ten years to learn how to smile and wave before she became the Duchess of Cambridge. Meghan has had just a few months but she is already the mistress of the walkabout. If she breaks royal protocol by posing for a selfie, that only endears her more to the public.

The real challenge for Meghan will come after the wedding. In the days when she had a social media presence, she described herself as a “strong, confident mixed-race woman” and a “feminist.” But as a member of a family which carefully eschews anything that looks like a political statement, Meghan will have to walk the tightrope between personal belief and her royal persona. As Harry’s bride she has become one of the most famous women in the world, but as a royal her celebrity is conditional. The enduring popularity of Queen Elizabeth is based not on her zealously guarded personal opinions, but on her extraordinary durability. She is a symbol of continuity in an increasingly restless world, a royal poker face in a deck of hyperactive tweeters. The Queen knows the power of being both visible and yet unknown; perhaps the only thing we can be certain of is that she likes animals. She is a constant presence in the lives of the British people, but her absolute self-control means that the public is always left wanting more. Meghan will have to balance her laudable desire to use her royal status to make the world a better place, with the discretion—or neutrality, almost—that is an inescapable part of the job. There is no room, currently, for a hashtag princess.

But the power Meghan has is in the optics. At a time when Britain’s social contract has been shaken by Brexit, and scandals like the Grenfell tower fire, there is enormous— value in having a member of the royal family who is not white, nor especially privileged. The fact that a woman of Meghan’s background can become a royal duchess makes the House of Windsor a lottery rather than a cabal. Every little girl now can legitimately dream of marrying Prince George, whatever their color, nationality or sexual history.

It would be fascinating to know what Queen Victoria would make of the direction that her great-great-great-great-grandson Harry is taking the royal family. She was extremely interested in the marriages of her children and grandchildren, and wherever possible she used them to create her own unofficial European Union. Every royal marriage in Victoria’s time was part of a project to consolidate a constitutional monarch’s diplomatic power. If Victoria were alive today, I’m sure she would quickly grasp that in a time when there are no more royal dynastic alliances to be made, it is astute to choose a bride whose experience and traditions enrich the royal landscape. The present Queen understands this too. If the royal family is to survive, it has to continue to be a global brand. The real threat to the monarchy is not unconventional new members, but public indifference. Harry has always had star power, but by choosing Meghan he has given himself and his family a ratings boost. There can be no doubt that their marriage is a love match but in his choice of bride Harry has shown that he has his mother’s flair for riding the zeitgeist.

It is the ultimate paradox that the qualities that made Wallis Simpson so toxic to the British public eight decades ago are in Meghan evidence of a new dawn for the royals. Wallis was seen as a vulgar American adventuress, while Meghan is perceived as a career woman who isn’t afraid to admit her mistakes and move on. The American nationality seen as an affliction in Wallis gives Meghan a glorious advantage, in that it instantly removes her from the English stratification of class. While Kate Middleton was described as a commoner, Meghan Markle is simply an American. The Italian writer Giuseppe di Lampedusa once said that “for things to stay the same, everything must change.” As sixth in line in the throne Harry will never be king. But by choosing Meghan he has made sure of his place in royal history.

Daisy Goodwin is a bestselling author and creator and screenwriter of PBS Masterpiece’s Victoria. 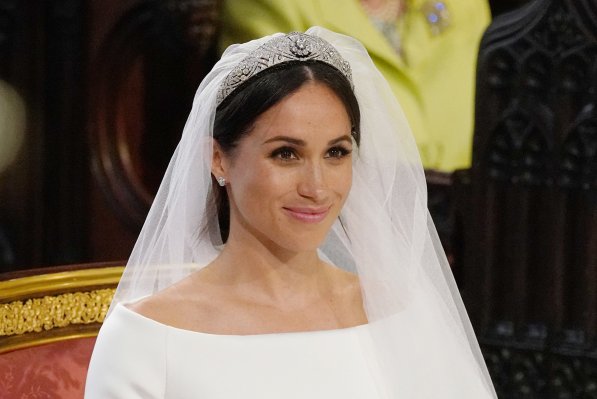 Why a Royal Meghan Markle Matters
Next Up: Editor's Pick