When the Brooklyn Bridge opened on May 24, 1883, its towers were the tallest structure in the country, and it was considered an engineering marvel of the kind that few Americans outside the big city would have seen in person.

But those Americans, around the turn of the century, might have seen it in a movie, like the short film above. Perhaps they saw the film when W. Frank Brinton, an early-20th-century traveling moving-picture exhibitor, came through their towns. Brinton spent the years around the turn of the century bringing movies to America’s heartland and in 1908 retired to Iowa, bringing his films with him — including this one, of a journey across the bridge by train.

Brinton died in 1919, and his collection went underground, literally. Decades later, in 1981, the films were unearthed in a farmhouse basement by a local history teacher and antique collector named Michael Zahs.

They were a remarkable artifact, particularly because many of the films made at that time had disappeared entirely. Cellulose nitrate film, of the type used here, is highly flammable; it wasn’t until later that companies like Eastman Kodak began to produce “safety film.” The earlier product had been a hazard for users, and it also a tendency to destroy itself.

Zahs donated many of the originals to the American Film Institute. But he kept copies of the films on his farm for another three decades, during which time he made it his mission to bring those five hours of film back to life, exhibiting some of the early movies — some of which were landmark films by artists such as Thomas Edison and Georges Méliès thought lost forever — once again. In 2014, Zahs donated the collection to the University of Iowa, which began working with the company Media Preserve to catalogue and preserve the Brinton Collection.

Zahs and the Brinton Collection are now the subject of the documentary Saving Brinton — by Tommy Haines, John Richard and Andrew Sherburne — which has its New York City theatrical opening on Friday. The filmmakers say this particular Brooklyn Bridge clip had not been viewed publicly for a century when it was rediscovered; New York audiences will now get a chance to see it again.

“Apparently this copy is the only one. No others have shown up and there’s no reference to another one,” Zahs says. “Who knows how many copies of this existed at one time? But almost all cellulose nitrate film has self-destructed in the last 100 years. It’s kind of a film miracle.”

While film researchers have made enormous progress with the collection, some mysteries remain.

For example: The origins of this clip of a journey across the Brooklyn Bridge, from Manhattan to Brooklyn, are still unknown.

Researchers say that it was probably filmed in 1899, based mostly on the advertisements that can be seen on billboards that surround the bridge. Researchers also guess that it might have been filmed during a day off, as there are many pedestrians and they appear to be somewhat dressed up. That holiday was possibly Admiral Dewey Day — which marked the return of the admiral after the U.S. victory over Spain in the Philippines — but researchers aren’t sure. Though Brooklyn Bridge films were created by Thomas Edison and by American Mutoscope, this movie doesn’t match descriptions of any known examples. And how was the film made? Was a camera mounted to the train, or was there a camera person riding in the front? Who are the people out on the track, and why are they there?

The filmmakers hope that the publicity about the documentary might connect them with someone with more information about the Brooklyn Bridge film and other clips.

As for Zahs, the New York premiere offers another opportunity, too: His first chance to see the Brooklyn Bridge in person.

Update — Nov. 15, 2018: This fall, Tommy Haines received a pleasant surprise from Daniel Streible, the head of the Moving Image Archiving and Preservation program at NYU confirmed to Tommy Haines. Streible had found footage in the Library of Congress that appeared to match the mysterious Brooklyn Bridge footage. The date on that film: Sept. 22, 1899. 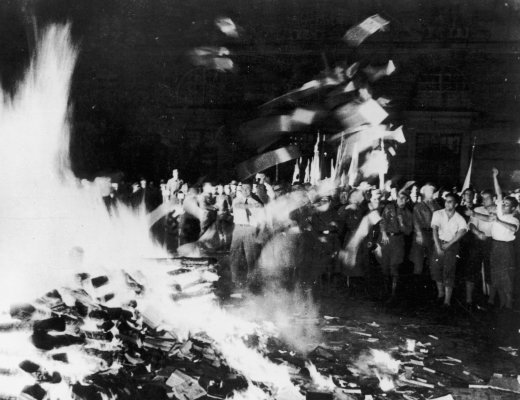 The Real Incendiary History Behind Book Burning and 'Fahrenheit 451'
Next Up: Editor's Pick