Windsor Castle is seen in the reflection of a bank window as Sunny, a homeless man who has been on the streets of Windsor for around eight months, lays in his sleeping bag on January 5, 2018 in Windsor, England.
Leon Neal—Getty Images
By Ciara Nugent

As the English town of Windsor makes final preparations for the Royal Wedding on Saturday, a controversy over homelessness has dampened the celebratory mood.

Recent reports of police removing belongings from homeless people near Windsor Castle, where the ceremony will be held, have sparked criticism, with many on social media calling the approach “shameful.”

Police Superintendent Jim Weems, who is leading the police presence at the wedding, told the BBC on Tuesday that homeless people will not be removed and that the local police “takes a very compassionate approach to homelessness.” Local Thames Valley Police told TIME that the storage of belongings was “entirely voluntary” and designed “to ensure the safety of the homeless community.”

Murphy James, who works with the Windsor Homeless Project, said that storing possessions would ensure that police coming into the town from other areas do not throw them away.

The debate first made national headlines in January when Simon Dudley, leader of the local government, asked police to use legal powers to remove homeless people from the streets before the wedding. He said the town suffered from “an epidemic of rough sleeping and vagrancy” and and wrote in a letter that “bags and detritus” from local homeless people created a “hostile atmosphere” for residents and tourists and presented “a beautiful town in a sadly unfavorable light.” Dudley’s comments earned him widespread criticism from the public and politicians, including British Prime Minister Theresa May.

James said Dudley’s comments were “crass” but had “put a really useful spotlight on the issue.”

The Windsor homeless population controversy comes amid a rapid rise in homelessness in the U.K. The number of people living on the streets has increased by 134% since the Conservative Party came to power in 2010, according to the National Audit Office. Opposition politicians have laid the blame on severe cuts to public spending.

Vicky Cheeseman, who works at Slough Homeless Our Concern (SHOC), a homeless shelter in the nearby town of Slough, told TIME she was preparing for an influx of people from Windsor using their services. “The council had said they wouldn’t move homeless people on but that’s what it looks like,” Cheeseman said. “And the more people coming to Slough the more pressure on Slough Homeless Our Concern as the only full-time homeless shelter in the area.”

Polly Neate, CEO of U.K. homelessness charity Shelter, said, “It shouldn’t be a case of out of sight, out of mind. These are people who desperately need our help, and long-term support to move off the streets for good.”

Up to 100,000 people are expected to cram into the town of Windsor for the royal wedding this weekend and security measures are being ramped up, with extra police officers patrolling and bollards being put up to prevent terrorist attacks with vehicles. Thames Valley Police said, “everyone in Windsor on the day of the wedding will be subject to a search and screening. Anyone with large items that are deemed to be a security risk are likely to have those items removed.”

Slough Homeless Our Concern has said launched an “alternative royal wedding list” with the help of Patchwork, a platform that allows people to share their wedding wish lists. People can contribute toward specific items, such as books, shaving kits and washing machines.

Olivia Knight, founder of Patchwork, said the project had received a “lovely response.”

“It’s uniting republicans and monarchists, because no one can say this is a bad idea,” Knight said. “Harry and Meghan said they don’t want traditional wedding gifts and that people should donate to charity instead. We’ve taken this really literally. Because if they don’t need toasters and towels, shelters definitely do!” 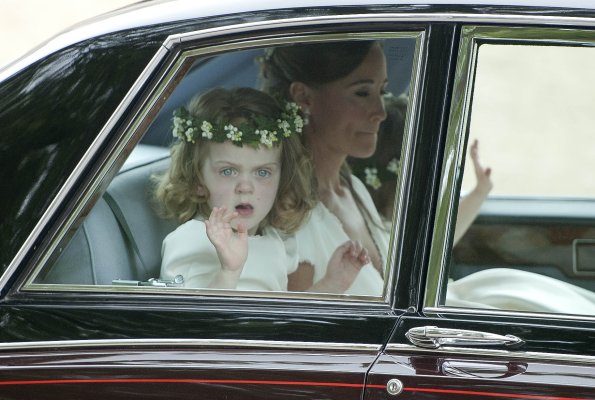 Meghan Markle's Bridal Party Is Going to Be More Adorable Than You Thought
Next Up: Editor's Pick