Social Media Is Distorting What Politicians Believe Is Real

An illuminated wall bearing Twitter Inc.'s logo in this arranged photograph in London, on Jan. 5, 2016.
Bloomberg/Getty Images
Ideas
By Joe Lieberman
Lieberman, a former U.S. Senator for Connecticut, is national co-chairman of No Labels.

The recent focus on whether Facebook and Twitter spread fictitious information should point our attention to another problem they enable: Social media changes whose voices are heard in modern society. Messages posted online provide policymakers and opinion leaders with distorted impressions of what the public believes and wants. Extremes — including partisan and ideological extremes — dominate the digital landscape of ideas. Through the online looking glass, bipartisanship and moderation are barely visible.

This problem surely predates any of the Silicon Valley companies currently in Washington’s crosshairs. Whose voices are heard by leaders in a democracy? How do leaders determine what popular thinking is when they make decisions? Elected officials have always worked to decipher what the public wants.

For example, when I first joined the Senate, I resolved to host town hall meetings in communities throughout Connecticut, to interact face-to-face with everyday citizens and to hear what was on their minds. So my staff put together a statewide strategy, broadcasting my scheduled visits to Bridgeport and Watertown and Storrs before I arrived. After flying home from Washington, I’d drive to a city hall or a middle school auditorium, giving the assembled audience a quick overview of what was happening on Capitol Hill and then opening the floor to questions.

A few months in, however, it became clear to me that these prearranged gatherings weren’t offering me authentic insights. Sure, some attendees would bring up a new or local concern. But more often, these town halls were either stacked with single-issue advocates whose representatives I was already seeing in Washington or were dominated by people worried about “black helicopters.”

So I changed my outreach format. Rather than host meetings, I would visit local diners, going from table to table and asking folks what they wanted me to know before heading back to the Senate. These conversations were much better reflections of what ordinary people were focused on — fear that a new health care proposal would raise their taxes, that utility rates were rising too fast or that the U.S. was too involved in conflicts overseas (or not involved enough). Remarkably, what I gleaned by meandering between tables tended to line up much more reliably with public opinion polling.

When the digital revolution began providing constituents with easier ways of connecting with their elected representatives, many predicted that the diner crowd would become even more engaged. It’s less taxing, after all, to send an email than to write a letter. It’s easier still to sign an electronic petition or to “like” a post. But we failed to predict the degree to which social media has empowered the town hall crowd at the expense of the people I met going from table to table at the diners. We are now being revisited by the same challenge I faced during my early years in the Senate — but with the much broader influence of modern social media.

We should appreciate the narrow spectrum of Americans who take the time to participate in political meetings and social media debates. In many cases, they keep government on its toes and even more honest. But let’s acknowledge that voters who don’t have the time or inclination to attend a town hall — people too busy running small businesses or driving their kids between after-school activities — are also less likely to post political messages on Twitter. That’s the problem. Partisans and ideologues on both ends of the political spectrum have the passion (and make the time) to dominate mainstream political debate in person and online.

Of course, this isn’t the sole cause of Washington’s dysfunction today. American politics is more polarized for a variety of reasons. But we need to be mindful of the probability that the digital revolution has made polarization seem much more pervasive than it actually is. The partisan anger spilling out on Facebook does not reflect the broader electorate.

A Harvard-Harris poll released earlier this year showed that roughly three in four Americans want President Donald Trump to compromise with the Democrats and also want the Democrats to compromise with President Trump. On the merits, most Americans support the bipartisan ideas the Problem Solvers Caucus in the U.S. House of Representatives have been proposing. But too often that is not how things appear.

What should we do about this gap between social media and reality? This situation represents a classic case where discretion is the better part of wisdom. Elected officials cannot responsibly offer a legislative solution to this problem because there is no constitutionally acceptable way to limit speech of this kind. Instead, the solution is for elected officials and the mainstream media to understand that what they read on social media probably is not representative of the electorate at large. For their part, centrists have an obligation to engage in more communication online, or they will cede the ground of social media to people on the margins.

I loved my years in Congress, but I don’t envy my successors. Elected officials today must find it much more challenging to separate the truth from the noise. I’m gratified to see Congress taking a closer look at whether Silicon Valley is protecting our data privacy with the vigor the task demands. But the reckoning should not end there. We all need to understand that the interactions we have online too often distort broader public opinion. In the end, of course, there is no substitute for elected officials deciding themselves what is best for their country and working with members of both parties to make that happen. 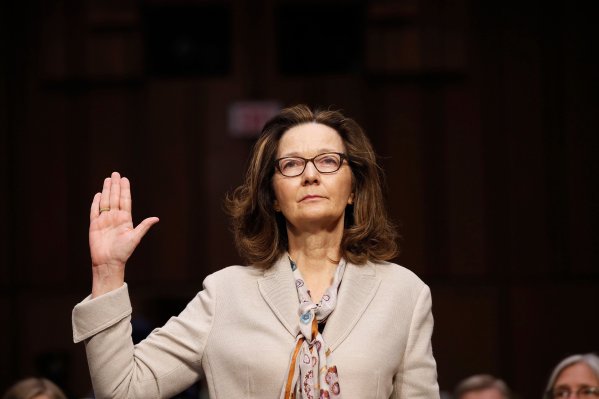 Gina Haspel Ran the CIA Site Where My Client Had Been Tortured. Her Testimony Changed My Opinion of Her
Next Up: Editor's Pick