Hawaii issued an aviation red alert Tuesday after the Kilauea volcano spewed a plume of ash into the air, with authorities warning the volcano could become more explosive.

Rising up to 12,000 feet, ash and volcanic smog drifted southwest over 18 miles from the Kilauea crater, Reuters reports.

“At any time, activity may become more explosive, increasing the intensity of ash production and producing ballistic projectiles near the vent,” the HVO said in a later statement.

According to the U.S. Geological Survey (USGS), a red alert means a major eruption is imminent or underway and ash could affect air traffic. It is the first time the alert has been issued since Kilauea began erupting again 12 days ago, according to Reuters.

The ash is a new hazard to hit Hawaii’s Big Island since the latest volcanic eruptions began. Volcanic gas and lava have destroyed 37 homes and structures and prompted the evacuation of about 2,000 residents.

On Monday, the Hawaii County Civil Defense issued a “condition red” alert for air quality around Lanipuna Gardens after a fissure opened up, releasing toxic gases. Residents were warned to stay away as the gas could cause “choking and inability to breathe.” 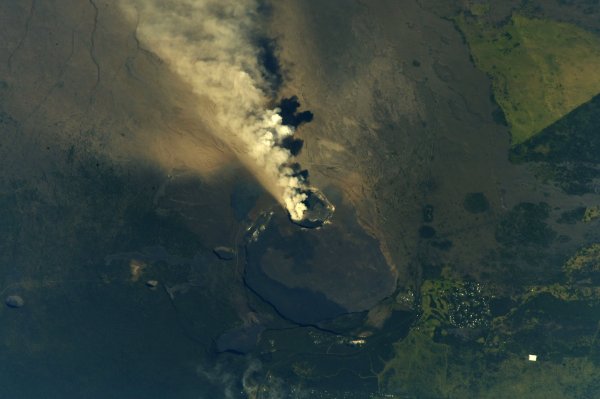 Here's What the Hawaii Volcano Looks Like From Space
Next Up: Editor's Pick