How Teens Are Redefining the Conversation Around Depression, According to Actor Rowan Blanchard

Krista Schlueter for TIME
Ideas
By Lucy Feldman
Feldman is a Senior Editor for TIME.

Rowan Blanchard was 14 years old when she made headlines for a social media post in which she shared that she struggles with depression. The activist and actor, then starring on Girl Meets World, posted a personal essay reflecting on her year on New Year’s Eve 2015, in which she wrote how she’d come to terms with all the uncertainty that comes with being a teenager. “As I found myself, this year in particular, going through ups and downs with depression,” she wrote, “I realized that instead of rejecting and ostracizing these teenage feelings (human feelings), I can learn to love the intensity of them and know that everything is momentary.”

Because she grew up with the internet, Blanchard told TIME, sharing her thoughts online has always felt natural — but what she didn’t realize at the time was the extent to which adults would pay attention, and how powerful her words could be for other teens. At a recent mental health roundtable event hosted by TIME, Dear Evan Hansen and philosophy, Blanchard participated in a discussion about teen depression and anxiety in the age of social media with John MacPhee, executive director of the Jed Foundation, and Jeannette Pai-Espinosa, president of National Crittenton Foundation.

Before the event, Blanchard, now 16, spoke with TIME about finding support, self-care and why she opts for openness.

People were like, “14-year-old Rowan Blanchard announces she has depression.” And I’m like Jesus, I did not “announce.” It felt very contrived. But at the same time, if it takes someone like me saying something like that for people to wake up and realize teenagers are telling you how we feel, then maybe that’s what it takes. Teenagers have been announcing their feelings online since the internet started, and that’s where I grew up. I grew up on Tumblr, on Twitter, on Instagram, and it was always like you share your feelings online. I think because adults aren’t as used to that, it can be shocking, quote-unquote, to see how we feel. But I honestly don’t find it shocking that girls are sad or queer people are sad or that all these people who are targets of systematic oppression are sad. It’s cool that I was able to shine more light on that.

Just about a month before that New Year’s Eve post, you also posted a call for people to stop telling you to smile in pictures and stop asking ‘Are you depressed?’ What was it liked to be asked such a personal question in such a flippant way?

I am weirdly known on my Instagram for not smiling in photos and it’s literally not contrived, it’s just because I like how I look better when I’m not smiling, to a certain extent. It gets read into as this performance on sadness. It was interesting to be growing up and coming of age and going through puberty and having all these people telling me, “You need to be smiling. Are you depressed? Are you so sad?” And I’m like, I’m 13, stop. People of all ages came for me and told me the way I was presenting [myself] online wasn’t enough, and it was during this point in my adolescence when I was so insecure about everything anyways. I felt so much pressure to be happy and I wasn’t, so I was asking, what’s wrong with me? And luckily I found this catharsis on the internet through people like Audrey Wollen, who invented Sad Girl Theory, Lana Del Ray, people who were so sh-t on by the media for not appearing happy, or ridiculed in this ironic way. I felt so much safeness in their presence because it affirmed my sadness as something that wasn’t my fault.

What have you done to address your depression?

I’m lucky to go to a therapist. I talk about it with my friends. It’s not this burden I carry. It’s not like a thing that’s my dirty little secret. I’m very frank and very open, and that has been aid to me, just letting my friends know I’m really depressed so I might cancel on you five minutes before I’m supposed to meet you. I’ve had that relationship to a lot of my friends because we can talk about our mental health with each other, but we can’t rely on adults the same way to understand that when we tell each other we’re sad, we’re being serious. People who are close in age can understand that things are more surreal and devastating at this age because everything’s happening for the first time.

You’re making me feel like I can forgive myself for the mistakes I made in high school.

Yeah! I have to forgive myself for the mistakes I’m f-cking making. Part of my self-care was being like, not all of my life has to be public. I realized that I was sharing, sharing, sharing, because that was the culture I was used to, and once I started gaining a platform and writing things about my mental health I realized, oh, actually, it’s up to me what I want to say. And that felt like a way of self-care — it’s up to me, it’s my voice, I can choose how I want to use it. I’m f-cking up every day in my regular life, I’m just not posting about it. So then I get idolized as somebody who doesn’t f-ck up, but nobody knows what I’m out here doing. I’m a teenager — I’m trying to figure out how to be a good person, a good daughter, a good sister, a good friend.

Self-care is a buzzword in some ways, but it also describes something important. How do you think about that?

Self-care is a real thing, but I would like us to reframe it or something. The way we talk about it is in this empowerment- or wellness- based media [context] where the goal is to have self-care and to be self-empowered, where you don’t need anybody else, all you need is yourself. When in reality, when I’m sad I need other people. My self-care has always been aided by other people reminding me to care for myself, because I don’t know if I’m self-responsible enough to remember to do that. Telling my friend, I’m sad, I’m not going out with you tonight, I’m just going to stay in my room and cry — and she’s like, no, why don’t we walk to the park? That will make you feel better — that feels more like self-care than, oh, I’ll just go run on the treadmill or something, and then I’ll feel empowered.

Who are your biggest supporters?

I have so many older mentors, and that’s been super helpful for me — having people who are 10 or 15 years older than me be aids at this time when I’m not sure I have all the answers. It’s been really helpful to be able to have older siblings, not in real life but spiritually. I have two younger siblings so I try to be that for them, but I need older siblings, too — so I adopted some.

You’ve had to come to terms with your mental health being up for public discussion, and yet a lot of people can’t bring themselves to speak with their family about their struggles.

I still struggle to talk to my parents about it, while I can talk so easily to people on the internet. I think that comes from normal teenage embarrassment like, I don’t want my parents to know what I’m feeling and they’ll never understand. I just had to adapt really quickly to being able to sort of say things and not get too apologetic about it. That’s not something I was born with. 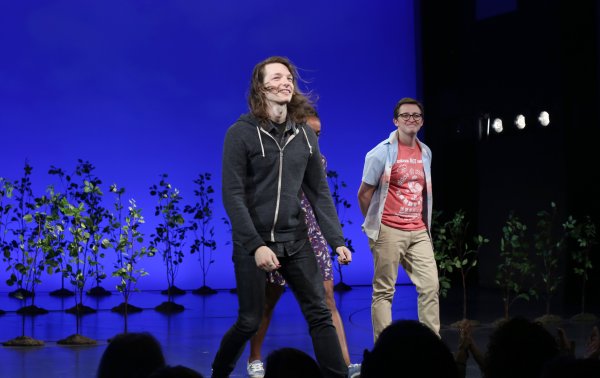 How One Woman’s Suicide Attempt Inspired This Actor’s Performance in Dear Evan Hansen
Next Up: Editor's Pick