Here's What the Hawaii Volcano Eruption Looks Like From Space

The first pictures are emerging of what Hawaii’s Kilauea volcano eruption looks like from space.

Two astronauts aboard the International Space Station shared photos of their view of the massive smoke plume on Hawaii’s big island.

The rolling eruptions of Kilauea, which have caused hundreds of earthquakes, forced thousands of people in the nearby communities to evacuate.

“We hope those in the vicinity of the eruption can stay out of harm’s way,” tweeted Drew Feustel, a NASA flight engineer aboard the ISS, on Monday.

The astronauts, who launched into space in March on Expedition 55/56, spotted signs of the volcanic eruption over the weekend. The astronauts were carried to the ISS by a Russian Soyuz spacecraft that had a radio callsign “Hawaii.” Ricky Arnold, another NASA astronaut aboard the ISS, tweeted two images of the plume of smoke as the space station “flew over our namesake.”

Back on Earth, the Kilauea eruption has caused around 2,000 residents to evacuate their homes and has destroyed more than 30 homes. Eighteen fissures have cracked open in the days since the eruption began, spewing lava through in some residential areas and toward the ocean.

On Monday, the Hawaii State Department of Health warned residents in Lanipuna Gardens of dangerous levels of sulfur dioxide gas.

Images of the eruption and lava flow taken from a helicopter at 4,000 feet show the path of destruction. “If you’ve ever seen a flow move through an area, there’s nothing that can stop it, Absolutely nothing,” Bruce Omori, a photographer who shot aerial photos of the lava, told TIME last week. “So for it to break out in a populated area, it’s really sad.” 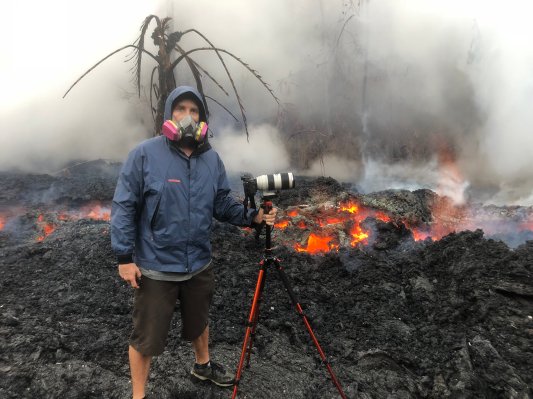 A 'Lava Chaser' on the Thrill of Getting Dangerously Close to Hawaii’s Kilauea
Next Up: Editor's Pick