'It Will Always Be Our Capital': A Day of Victory for Israel Is a Day of Rage in Gaza

The Trump Administration made a risky move Monday, putting into practice what many American politicians have promised in theory—the relocation of the U.S. embassy in Israel from Tel Aviv to Jerusalem.

The joy among Israelis at watching their most powerful ally bestow official recognition on Jerusalem as their capital city is being matched with equal amounts of outrage among Palestinians, as protests along the border with Gaza turned particularly deadly.

At least 58 Palestinians have died, including 57 killed by Israeli troops and a baby who died from inhaling tear gas, the Associated Press reports citing the Gaza Health Ministry. More than 2,700 others were reportedly injured Monday. The Israeli army said that at least 35,000 Gazans amassed at the border, many of them pushing to break through into Israel at the culmination of a weeks-long protest called the “March of Return.”

Monday’s escalating violence, accompanied by Palestinian demonstrations in East Jerusalem and the West Bank, cast a shadow on the embassy celebrations underway in Jerusalem. The demonstrations were expected to extend into at least through Tuesday, in a “day of rage” called by Palestinian leaders to mark what they call the “Nakba,” or catastrophe, the Arabic term for the events of 1948—including the mass evictions of Palestinians as part of the declaration of the state of Israel. Dozens of funerals will only add to the feeling of a land once again gripped by war.

Read more: How the idea of return has shaped the Israeli-Palestinian conflict for 70 years

“There will be a Palestinian storm in the coming days whether I like it or not,” says Mahdi Abdul Hadi, a political scientist in Jerusalem and founder of PASSIA, the Palestinian Academic Society for the Study of International Affairs. “The battle of Jerusalem is a battle over geography, demography and sovereignty.”

A worker on a crane hangs a U.S. flag alongside an Israeli flag, next to the entrance to the U.S. consulate in Jerusalem, on May 7, 2018.
Ronen Zvulun—Reuters

Exactly 70 years ago today, the newborn state of Israel declared its independence. The Arab world rejected the proposition of a Jewish state in the region—as well as a partition plan proposed by at the United Nations the previous November—and declared war. That conflict ended with an armistice in 1949 that left an embattled Jerusalem divided into two parts—a western half that was Israel’s capital, and an eastern half in Jordan. In a subsequent Middle East war in 1967, Israel wrested land from all of its immediate neighbors, gaining East Jerusalem and its coveted Old City, with its various holy places. Israel later annexed the territory and applied its law there, and for 50 years has called it the indivisible capital of Israel.

Prime Minister Benjamin Netanyahu used those exact words Monday while speaking at a dedication ceremony marking the official move of the U.S. embassy to a building that had been intended for consular services. He told the crowd that as a child he used to walk on the exact spot on which the now-embassy stands, on what were then just fields near a no-man’s land and the Jordanian border.

“I would approach this place right here, but only so far, because my mother told me, ‘you can’t go any further’…it was exposed to sniper fire,” Netanyahu said, and then paused. “That was then, this is now. Today, the embassy of the most powerful nation on earth, our greatest ally, opened here!” he told the crowd, to rousing applause.

For Israelis, Sunday was the official day marking the reunification of Jerusalem; to Palestinians, the very same date marks the occupation of the city. Many Palestinians are still hoping to see the creation of a Palestinian state with its capital in East Jerusalem, co-existing with Israel in a two-state model that many hoped would result from the Oslo Accords first signed nearly 25 years ago. For President Donald Trump to move the U.S. embassy in Israel to Jerusalem before any such solution is reached, Palestinians say, is to send a message that their claim to the disputed city is unimportant or irrelevant.

Read more: Gaza is once again at the center of violent clashes. Here’s how the territory became so conflicted

“I am here to express my rejection of the Trump declaration concerning Jerusalem,” says Younis Lafi, a construction worker who came to a major protest at the Qalandia Checkpoint between Jerusalem and the West Bank. Lafi, 37, watched as younger men and teens dressed in black t-shirts lobbed stones at soldiers perched behind big blocks of concrete. Some marchers carried large keys to symbolize the desire to return to homes that their families left in 1948.

“Israel and the U.S. must understand that no one can change the status of Jerusalem for us. It will always be our capital and they can never succeed in making it anything else,” said Lafi. Nearby, a paramedic said he’d seen injuries from live ammunition, rubber bullets and tear gas, all of which Israeli forces routinely use in response to Palestinian stonethrowers.

White House Senior Advisor Jared Kushner speaks during the dedication ceremony of the new U.S. embassy in Jerusalem on May 14, 2018.
Ronen Zvulun—Reuters

Another protester said that the high death toll should be read as proof not just of the excessive force used by Israel, but of the willingness of Palestinians to die for their homeland.

“Look at our young men everywhere who are telling the Israeli occupation that we sacrifice our lives for liberation. Either we want to live a decent life, or we don’t want a life,” says Ghassan Wahdan, 41, who had come to the protest with his 12-year-old son, who carried a Palestinian flag and wore a hat of Fatah, the main faction of the PLO. In Ramallah, the Palestinian Authority’s prime minister, Rami Hamdallah, released a statement saying that the very decision to announce the establish of the US embassy in Jerusalem on “a tragic day in Palestinian history shows great insensibility and disrespect for the core principles of the peace process. “

Many Israelis heralded the official U.S. recognition of Jerusalem as a day that was long in coming. Pro-Trump activists festooned the city with signs reading “Trump Make Israel Great,” borrowed from his “Make America Great Again” campaign slogan. Jerusalem Mayor Nir Barkat, whose rightist political orientation is similar to Netanyahu’s, named a square after Trump to thank him for his decision to “make good on a promise” to move Washington’s embassy to Jerusalem.

Some Israelis, however, saw it as a mixed victory; others were even more ambivalent.

David Wilfond, a U.S.-born rabbi, lives a stone’s throw from the new embassy, which while not slated to be a permanent home, could be the acting embassy for several years to come. What had been a quiet Jerusalem neighborhood on the seam-line between East and West is now a focal point crawling with extra security.

“It’s the correct thing, but it’s certainly a scary thing, because we and our partners for peace have a very problematic relationship,” says Wilfond. “You could say there should be two embassies in Jerusalem…but it seems like a bizarre double-standard that the world applies to Israel. Does anyone say to the Cypriots you can’t put your capital there because the Turks used to be there?”

Another local resident, Naomi Schacter, was one of several Israelis who launched a court challenge over the placement of a massive new security wall planned for a hilly road that overlooks the embassy and the pastoral landscape of East Jerusalem, the West Bank, and on clear day, the Dead Sea and Jordan. The high court petition was turned down, but the process seems to have delayed the construction of the wall that Israeli residents fear will wreck their view and increase the sense of being boxed in.

“I view Jerusalem as central to Israel—it’s where the government has been for decades—so that piece of the decision isn’t really the matter for me,” says Schacter, a dual citizen of the U.S. and Israel. “But it was an ill-advised move, in that it could have served as collateral for something. It could have come with a peace deal, and instead it was just presented on a silver platter. This was an opportunity for forward movement, and instead it’s just fanned the flames.”

That is a criticism that both Trump and Netanyahu are likely to face in the coming days. Jared Kushner, Trump’s son-in-law, sought in a keynote policy speech to link the embassy relocation with the administration’s decision last week to pull out of the Iran nuclear deal, touting both decisions as a kind of message about America’s new face in the Middle East.

But it’s difficult to say whether either move will make Israel more secure. Palestinians expected the protests to grow larger on Tuesday, and that was even before the death toll from Monday’s demonstrations emerged. Some Palestinians said that the impending start of Ramadan, the Islamic holy month, could ratchet up tensions further.

U.S. diplomats, meanwhile, will be left with the trying job of convincing Israelis and Palestinians that Washington can still be an fair-minded broker. “It’s a very interesting process,” says one U.S. embassy official who spoke on the condition of anonymity. “We recognize the historic nature of this move, it’s going to require a lot of changes down the road. We also have a consulate-general in Jerusalem and their mandate is to continue relations with the Palestinian Authority.” That may be the most challenging task of all. Palestinian President Mahmoud Abbas called the embassy an “American settlement in East Jerusalem.”

— With reporting by Nuha Musleh/Jerusalem 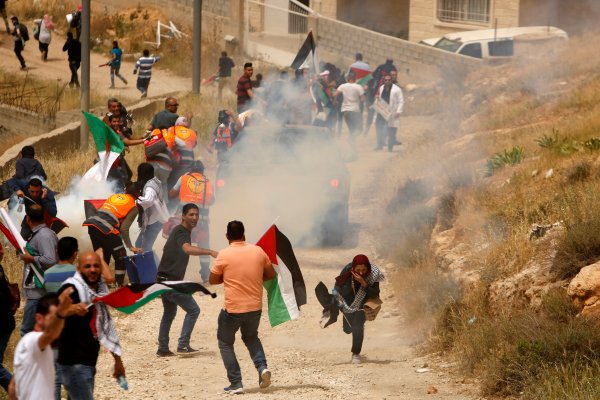 How the Idea of Return Has Shaped the Israeli-Palestinian Conflict for 70 Years
Next Up: Editor's Pick