An Asteroid the Size of the Statue of Liberty Will Whiz Past Earth Tomorrow. Here's How to See It

An asteroid the size of the Statue of Liberty will zoom past Earth on Tuesday.

The asteroid, dubbed 2010 WC9, is about the size of a football field and will fly past Earth at about 28,655 miles per hour, according to EarthSky. It will come within 126,419 miles of Earth — the closest it has come to our planet in 300 years — though it is still considered a safe passing distance.

Despite its seemingly large size, the asteroid will not be visible to the naked eye from Earth. For those hoping to catch a glimpse of the asteroid, it will be visible with a telescope for some people.

But even if you don’t have a telescope, you can still see the asteroid Tuesday night thanks to a livestream from Northholt Branch Observatories in London. The observatory will stream it live on Facebook beginning Monday, May 14 at midnight local U.K. time, so viewers can see 2010 WC9 in space before it begins its approach past Earth.

The asteroid was originally discovered in 2010 by The Catalina Sky Survey in Arizona, but was then lost when it “became too faint to see,” according to EarthSky. Astronomers did not have enough information about 2010 WC9’s orbit to keep track of it until it reappeared this month.

It is bigger than the Chelyabinsk meteor, which broke up entering the Earth’s atmosphere five years ago in 2013. The Chelyabinsk meteor was two to three times smaller than this week’s 2010 WCJ, but its force upon entering Earth’s atmosphere still broke windows in multiple Russian cities and hospitalized more than 1,000 people. The crash was “pegged as 30 to 40 times stronger than the atomic bomb the United States dropped on Hiroshima,” according to EarthSky.

Before that, the famous Tunguska meteor broke up over Siberia in 1908 and was thought to be 1,000 times more powerful than the atomic bomb, flattening more than 80 million trees. 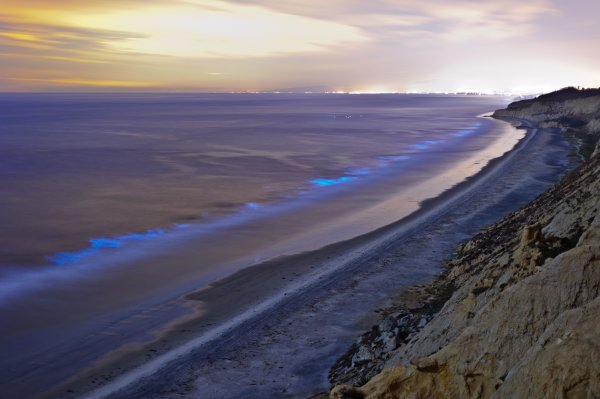 A Rare Phenomenon Made the Ocean in California Glow Blue This Week
Next Up: Editor's Pick