The Gaza Strip Is Only 25 Miles Long. Here’s How It Became the Center of Decades of Conflict

The Gaza Strip has once again become the focal point of violence this week, as the Israeli army prepared ground troops for a possible incursion following days of airstrikes by the Israeli air force and rocket attacks on Tel Aviv and other cities by Palestinian militants.

Gaza’s health ministry said Thursday that 83 people in the densely populated strip have been killed by the fighting since the beginning of the week. Seven people have died in Israel, which has also been the site of violent street clashes between Jewish and Arab mobs.

The escalation of violence in Gaza began after a police raid earlier this month around a mosque in Jerusalem, which sits atop a site considered holy for both Jews and Muslims. Tensions often rise between the two groups during the holy Muslim month of Ramadan and in the build up to Nakba day on May 15, when Palestinians commemorate their displacement from Israeli territories.

For Gaza, the current conflict is the worst since a war in 2014— but how did the area become such a flashpoint?

Due in part to its desirable coastal location, the land now known as Gaza has been fought over from time to time for centuries, but the modern conflict over the region dates to 1948. Before that time, the area known today as the Gaza Strip — a 140-square-mile stretch of land hugging the Mediterranean coast — was under British colonial rule as part of its larger post-World War I “Mandate for Palestine.” The region had for centuries been home to a Muslim Arab majority and small Jewish and Christian minorities, but as European Jews fled in the years around the Holocaust, the Jewish population grew sharply — as did Western support, particularly in the U.S. under President Harry Truman, for the idea of finding a home for the Jewish people.

In 1947, the newly formed United Nations approved a plan to partition the region into a Jewish and an Arab state. The Palestinian Arabs, backed by Syria, Lebanon, Jordan and Egypt, rejected the plan, as it gave them less than half the land despite their outnumbering Jewish residents two to one. But the leaders of what was to be Israel agreed to it and moved ahead on their own. On May 14, 1948, on the day of Britain’s departure from the region, Zionist groups lead by David Ben-Gurion declared Israel a state. The first Arab-Israeli war broke out the next day.

Egyptian forces set up a base in the town of Gaza and attempted to drive the Israelis back but, by that autumn, the area they controlled around the town was just about 25 miles long and 5 miles wide. When Egypt and Israel reached an armistice in February, the borders of the Gaza strip were drawn up and it remained under Egyptian control.

Three quarters of a million Palestinians fled or were expelled from their homes in the land that became Israel during 1948, during a period they call “al-Nakba” or “The Catastrophe.” Even though Egypt controlled Gaza, the Palestinian refugees who ended up in the Gaza Strip were not allowed by the government to pass into the rest of Egypt. Having lost their homes and livelihoods, around 500,000 people became dependent on U.N. aid.

Gaza remained under Egyptian military rule until the Suez Canal Crisis of 1956, when Egypt nationalized that major shipping route in defiance of Britain and France. Israeli ships were prevented from passing through the canal, and also from using the Tiran Straits linking Israel to the Red Sea. In response, Israel invaded Gaza, occupying the strip for several months before international pressure forced them to give it back to Egypt.

In June 1967, years of escalating border skirmishes and small-scale guerrilla attacks, exacerbated by the tensions of the Cold War, came to a head in the Six-Day War.

Acutely aware of their vulnerable position and with the memory of the Holocaust still fresh, Israel had built a powerful and well-organized military. On the morning of June 5, 1967, anticipating a move from its Arab neighbors, who had just signed a defense pact, Israel launched a stunning preemptive strike. The strike wiped out most of Egypt’s air force, followed by those of Jordan and Syria in the afternoon. This left the Arab states’ armies vulnerable and over the next five days of fighting the Israelis expanded their territory dramatically, capturing the Gaza Strip and the Sinai Peninsula from Egypt, the Golan Heights from Syria and the West Bank and East Jerusalem from Jordan.

After 2,000 years of exile, all of Judaism’s holy sites were now under Jewish control. Images of Israeli soldiers capturing the Western Wall in Jerusalem became iconic. Some Israeli politicians warned that the size of the new Israel would make future conflict inevitable, but religious Jews believed the capturing of their holy sites was a miracle bestowed by God, which could not be given up. Israel stationed troops in Gaza and began to build settlements in the newly occupied territories, in defiance of international law that prohibits occupiers from settling their people on the land they capture.

In 2005, Israel unilaterally withdrew its settlements and soldiers from inside Gaza in a so-called “disengagement” intended to limit conflict. The following year Hamas, which had established social and educational programs in Gaza, rode a wave of popularity to an election victory. It soon fell into a week-long battle with the ruling party, Fatah, which took control of the West Bank.

After Hamas’ election, Israel imposed a land, air and sea blockade on the strip, which human-rights organizations say has stifled the economy and had devastating effects on life in Gaza. An estimated 80% of the 1.3 million Palestinian refugees in Gaza rely on aid and over half a million live in refugee camps.

Sporadic rocket fire and attacks from Hamas and other militant groups in Gaza have been met with several bombing campaigns and land assaults from Israel. Tensions flare every year in the weeks leading up to the anniversary of “Nakba day.”

Correction: The original version of this story misstated the length of time Israel occupied the Gaza strip in 1956-57. It was a period of five months, not a year. 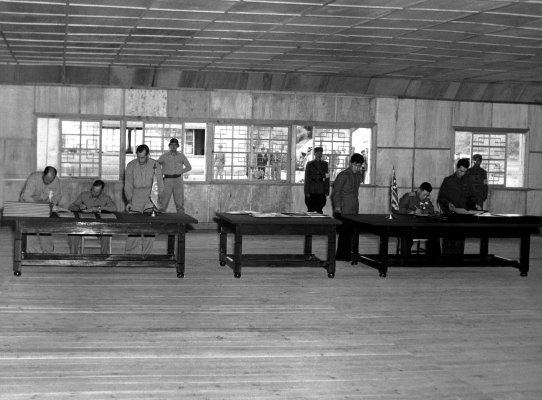 Why North Korea and South Korea Are Technically Still at War
Next Up: Editor's Pick