Iraqi Shiite cleric Moqtada al-Sadr delivers a speech to his supporters following Friday prayers at the grand mosque of Kufa in the holy city of Najaf, on April 3, 2015.
HAIDAR HAMDANI—AFP/Getty Images
By Vivienne Walt

In what could be a shock to Iraq’s political system 15 years after the U.S. invasion, the firebrand Shiite cleric Moqtada al-Sadr appears to have gained a large number of votes in Saturday’s parliamentary elections, potentially placing him in a kingmaker role as the major winners of the vote try to piece together a governing coalition over the next few weeks.

Early results from Iraq’s electoral commission place al-Sadr and Prime Minister Haider al-Abadi as the two leading politicians in the race — the fourth election since the U.S. invasion in 2003 brought down Saddam Hussein’s dictatorship, and the first after Iraq’s three-year war against ISIS, which ended last December.

Al-Sadr, who waged a lethal war against U.S. forces during the 2000s, has seen his popularity rapidly grow through this election season, partly as a result of his fierce criticism against successive governments for corruption and also for failing to secure the country against ISIS, which rampaged across Iraq in 2014, seizing nearly one-third of its territory, including its second city Mosul.

But there was another factor at work, too, in Saturday’s election: Fury and disaffection among Iraqis about the veteran politicians who have governed for years.

Iraq’s 18.2 million eligible voters had a whopping 87 parties from which to choose, grouped into large political blocs led by seasoned politicians with familiar faces, who have largely cycled in and out of power for 15 years.

Most billboards bore faces that have been around since 2003. Yet even before the votes were counted on Sunday, it was clear what the most popular choice among Iraqis was: None of the above.

Only about 44% of those eligible to vote bothered to cast a ballot, according to election officials. That turnout was sharply down from about 70% in 2005, when Iraqis held their first election after the demise of Saddam Hussein’s regime.

The reason appeared to be a mix of anger and cynicism.

Many Iraqis told journalists on the weekend that they were exasperated by the electoral system, characterized by a small coterie of establishment politicians who have pieced together winning coalitions by doling out political favors.

Those veteran politicians include al-Abadi, who was widely expected to win the election, and who is a moderate Shiite, the dominant group.

Read More: How Iraq’s Prime Minister is Trying to Build Peace After 15 Years of Conflict

“We demonstrated against the electoral system, but no one listened,” Mustafa Sadoon, a writer in Baghdad, told the Washington Post on Saturday. “I did not find any other choice to express my rejection except to boycott.”

In Sadr City, a poor, sprawling area of eastern Baghdad, Ramadan Mohsen, 50, told the Associated Press he had cast a blank vote because “the candidates have not done anything for the people.”

For months, Iraqi politicians have stressed that the elections were crucial to stabilizing the country after ISIS. Al-Abadi has repeatedly warned that unless Iraq forms a post-war government capable of attracting major investment, jihadists could mount a comeback in parts of Iraq.

“No country can withstand such onslaught,” al-Abadi told TIME in January, during an interview in the Republican Palace in Baghdad. “Our policy is to prevent it,” he said. “People must feel they are part of this country and they are citizens of this country.”

But the apathy and cynicism shown in Saturday’s low voter turning could make it difficult for Iraq’s leaders to instill that crucial sense of patriotism.

It could take the next few weeks, and maybe months, for al-Abadi or al-Sadr to form a governing coalition. Each heads a separate list of political parties, but each could try to realign their groups in order to form a government.

Politicians closely aligned to neighboring Iran appear to have gathered weaker support than expected. That includes Hadi al-Ameri, who heads the Badr Organization, which deployed thousands of militia to the frontlines against ISIS. Al-Ameri, like many Iraqis, has lashed out at the rampant corruption under successive governments.

“With the current institutions, it is difficult to rebuild Iraq, given the widespread bureaucracy and corruption,” al-Ameri told TIME in Baghdad last January.

Prime Minister Al-Abadi told TIME that Iraq needed about $88 billion in order to rebuild shattered parts of Mosul, as well as war-ravaged infrastructure and housing elsewhere — money it has yet to attract from donor countries, which have waited to see who will run Iraq.

In interviews given previously to TIME, no diplomats or officials predicted that al-Sadr might emerge as the potential next leader of Iraq. That possibility might send chills through many Americans, who recall the deadly attacks his followers launched against U.S. soldiers during the 2000s. But in recent months, al-Sadr has pressed for the creation of a non-religious, technocratic government. That would be a sharp break from his previous image as a fiery rabble-rouser.

Under Iraq’s cumbersome process, the country’s current President Fouad Massoum — a Kurd who holds a largely ceremonial job — needs to convene parliament within 15 days, which then elects the new president within a month. Then the winning political bloc from Saturday’s election has 30 days to try form a government — or pass the task to someone else.

That process could take many weeks, and drag well into Iraq’s broiling summer. It is time the country can ill afford to waste. 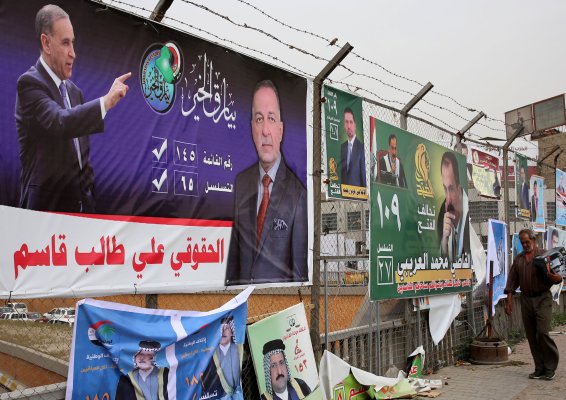 Iraq Can Rebuild Itself. But Only if the West Stops Promoting Personalities and Starts Building Institutions
Next Up: Editor's Pick