Your Complete Guide to Ramadan, Including the Proper Greeting and When It Starts

This week marks the start of Ramadan for more than a billion Muslims around the world.

The month-long observance — which starts on either May 15 or May 16 this year — will see Muslims fasting from sunrise-to-sunset, reciting verses from the Quran and attending prayer sessions. For many of those observing Ramadan, It is a time to become closer to God. It is also a time of joy and for spending time with one’s family, and giving to charity and those in need.

Here’s what you need to know about Ramadan, which is known as the holiest month in Islam.

Ramadan begins during the ninth month of the Islamic lunar calendar when the new crescent moon is first sighted. The exact start date of Ramadan will only be confirmed when the moon is spotted, and this year it is expected to be seen between Tuesday, May 15 and Wednesday, May 16, allowing for a day here and there depending on atmospheric conditions.

While many countries wait until they can see the moon before announcing the start of Ramadan, in some, like Oman, Islamic scholars and leaders consult with moon-sighters and announce the official start date a few days in advance. Saudi Arabia and a few other nations use special infrared cameras that can capture the birth of the new moon even when it isn’t visible to standard telescopes. This gives them time to prepare for the first day of Ramadan. This year, it is likely that Saudi Arabia will begin celebrating Ramadan on May 16 and Oman on May 17.

The end of Ramadan is also marked with the sighting of the crescent moon, marking Eid-al-Fitr, which should be around the second or third week of June this year.

Muslims perform the first 'Tarawih' prayer on the eve of the Islamic Holy month of Ramadan at the Chicago Mosque in Chicago, United States on May 26, 2017.
Bilgin S. Sasmaz—Anadolu Agency/Getty Images

What is Ramadan and how is it observed?

Ramadan is observed by Muslims to commemorate when God revealed the first chapters of the Quran, Islam’s sacred text, to the Prophet Muhammad. Muslims believe that during this period, the gates of heaven are open and the gates of hell are closed.

Muslims mark the holy month by fasting — considered to be one of the five pillars of Islam — during sunlight hours. The pre-dawn meal is called the suhoor, while the fast is broken at dusk with the iftar, starting with a few sips of water and some dates.

Abstinence during Ramadan isn’t just restricted to food and water, though. It extends to refraining from sexual activity, smoking, and even to jealousy, anger or other negative thoughts throughout the month. Muslims believe that following these practices during Ramadan will lead to self-purification, self-control and bring them closer to Allah. Many Muslims also attend special prayer services, read verses of the Quran and engage in charity.

During Ramadan, offices and schools in Islamic countries shut early. For instance, government offices in the United Arab Emirates will operate between 9 a.m. and 2 p.m. Some counties, such as Abu Dhabi, waive public parking fees near mosques during prayers. Many restaurants remain shut during daylight hours.

How do you wish someone a Happy Ramadan?

On the last day of Ramadan, which is Eid-al-fitr, the greeting changes to “Eid Mubarak.”

Does everyone have to fast?

Not everyone must fast. Islam prescribes that all able-bodied Muslims should fast during Ramadan but exempts young children, expecting and breast-feeding mothers, women who are menstruating, the elderly, and those with health conditions.

In certain cases fasting can be compensated at a later date. This year’s highly anticipated FIFA World Cup will be hosted in Russia toward the end of Ramadan and several Muslim footballers will face the dilemma whether to fast on days leading up to their games. Perhaps the most famous player to deal with this issue is Egyptian national and Liverpool star Mohamed Salah. However, the Grand Mufti of Egypt has granted Salah and his teammates permission to postpone their Ramadan fasting in the build up to their first game on June 15.

Non-Muslims visiting an Islamic nation are not expected to fast, but they are expected to refrain from eating and drinking in public spaces to respect those around them. 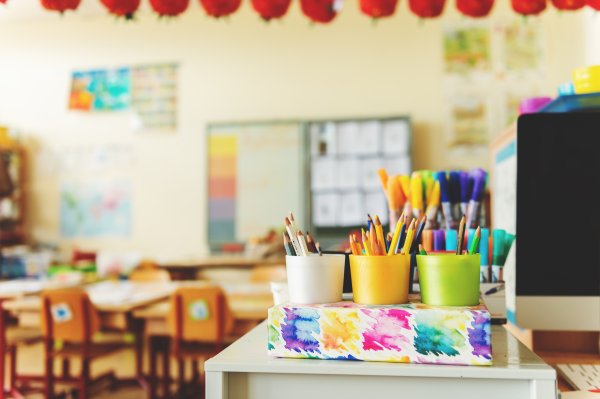 Here's the Meaning Behind the Google Doodle Celebrating Teacher Appreciation Week
Next Up: Editor's Pick