Indonesia Suffers Its Worst Terrorist Attack in a Decade. Here's What to Know About the Latest Wave of Violence

Indonesia was rocked by a wave of deadly suicide bombings Sunday and Monday, including three near-simultaneous church blasts that killed 13 people and left scores injured in the country’s worst terrorist attack in a decade. Two of the attacks, and a third apparently foiled attack, were conducted by families that included young children.

On Sunday morning, a family of six, including children and teenagers, carried out suicide attacks that tore through three churches just before Sunday service in Indonesia’s second largest city, Surabaya. Bombs planted at a further two of the city’s other churches failed to explode, Indonesia’s Jakarta Post reports.

Hours before, counterterrorism agents in West Java had shot dead four suspected terrorists and recovered handguns and explosives from the scene. That evening, three more people — a mother, father, and one of their three children — died in an explosion at an apartment block in Sidoarjo, just kilometers from the Surabaya churches. Local authorities said the family members were the “perpetrators, not victims” of the blast, according to the Guardian.

And on Monday morning, another bombing at Surabaya’s police headquarters killed at least four people and injured ten others. That attack was perpetrated by a family of five, including an eight-year-old child according to an Indonesian police official.

“This is the act of cowards, undignified and barbaric,” said Indonesia’s President Joko Widodo Monday, in reference to the spate of violence.

The attacks come on the eve of Islam’s holy month of Ramadan, which begins on May 15 or 16. While the vast majority of Muslims regard Ramadan as a period of reflection and charity, violent extremist groups consider attacks committed during the period particularly holy.

Indonesian police stand guard outside the Surabaya police station following another explosion on May 14, 2018 in Surabaya, Indonesia.
Ulet Ifansasti—Getty Images

What do we know about the attackers?

Indonesian authorities say that a family of six was responsible for the three Sunday morning church attacks. Mother Puji and her two daughters Fadhila, 12, and Famela, 9, carried out the bombing at Diponegoro Indonesian Christian Church. Yusuf, 18 and Alif, 16 detonated bombs near the entrance to the Santa Maria Catholic Church. And Dita, their father drove a car bomb into the Surabaya Centre Pentecostal church, according to Indonesia’s National Police Chief Tito Karnavian.

Karnavian initially said he suspected the family of six had likely returned from Syria, where hundreds of Indonesians have traveled to join the Islamic State (ISIS). But on Monday, the police chief clarified reports that the family had spent time in Syria were incorrect, according to AP.

Wawan Purwan, the communications director at Indonesia’s intelligence agency, said the Surabaya attackers were likely linked to the perpetrators of a prison riot last week, in which more than 150 Islamist militants killed five members of Indonesia’s elite Mobile Brigade police before surrendering.

This picture taken on May 13, 2018 shows a candlelight vigil in the city of Medan on Indonesia's Sumatra island to support the victims and their relatives of a series attacks at churches in Surabaya, East Java.
Ivan Damanik—AFP/Getty Images

Is this the first time Indonesian women and children have been involved in suicide bombings?

Terrorism expert Sidney Jones, the director of the Jakarta-based Institute for Policy and Analysis of Conflict (IPAC), tells TIME that her organization has been flagging “increased activity on the part of women, and increased intention to get involved in a more active combatant role” for some time.

Indeed, female would-be suicide bombers are not new: in December 2016 Indonesian authorities arrested Dian Yulia Novi and Ika Puspitasari, who had volunteered for suicide missions. However, Sunday’s attacks are the first time female suicide bombers have successfully detonated devices in Indonesia, according to Jones.

Taufik Andrie the executive director of Indonesia’s Insitute for International Peace Building tells TIME. “It’s moving forward very fast in terms of how women are trying to reach their ultimate goal of being as important as men as perpetrators.” Sunday and Monday’s attackers he says, are likely to serve as a “role model” for other militants.

“The narrative has now changed: it’s not only that kids can be a part of the radical family, but of also a part of the Jundallah,” Andrie says, using an Arabic word meaning The Army of God.

Although Indonesia does have a history of conflicts involving child combatants — such as in the Maluku Sectarian conflicts of the late 1990’s and early 2000’s — the use of young children in suicide missions is a particularly egregious development.

According to IPAC’s Jones, when Indonesian police refer to families who have returned from Syria, they often mean those who attempted to join ISIS there but were deported before crossing the border.

Deportees are put through a rudimentary rehabilitation program, Jones says, but the government lacks the capacity to monitor them once they have completed the short program: “In this case, and in a couple of other cases, some seriously ideologically committed individuals have returned having been deported but they haven’t been picked up by Indonesian government programs.”

Yuliastuti, grieves in front coffin of Sri Puji, one of the victims killed at Surabaya Centre Pentecostal Church attack, following a blast at the church a day earlier on May 14, 2018 in Surabaya, Indonesia.
Ulet Ifansasti—Getty Images

What is Indonesia’s history with militant Islamist groups?

In the early 2000s, Jemaah Islamiyah (JI), a homegrown extremist group allied with al-Qaeda and with cells in neighboring countries, was responsible for a spate of attacks in Indonesia, the deadliest of which were the 2002 Bali bombings that killed 202 people. However, through a counter-terrorism offensive aided by the U.S., Jakarta eventually broke JI — the group’s latest major attack was a suicide bombing in 2009, which killed nine people including the attackers.

Counterterrorism experts have warned of the threat returning fighters from Syria and Iraq pose to Indonesia, the world’s largest Muslim-majority nation. In June last year, Indonesia’s Military Chief General Nurmantyo told reporters “In almost every province [of Indonesia] there are already ISIS cells. But they are sleeper cells.”

After a period of relative calm, five ISIS devotees attacked a Starbucks in central Jakarta with bombs and guns in January 2016. In July that year, a botched suicide bombing at a police station in central Java killed the attacker and injured one officer. And in November, police foiled a plot to bomb the Myanmar embassy in Jakarta. When an ad-hoc group of ISIS aligned militants laid siege to Marawi City in the Philippines in May 2017, Indonesian fighters were among the combatants.

“It would be wrong to characterize Indonesians as overly prone to radicalism,” TIME’s Charlie Campbell wrote in 2017, noting the relatively small proportion of Indonesians traveling to Syria and Iraq compared with those of other nations. However, the sheer size of the country’s population means even a slight increase in radicalized individuals “could have calamitous consequences.”

The success of the latest wave of attacks, says Taufik Andrie, will have inspired confidence in would-be militants: “I think many of them will follow their lead,” he says. 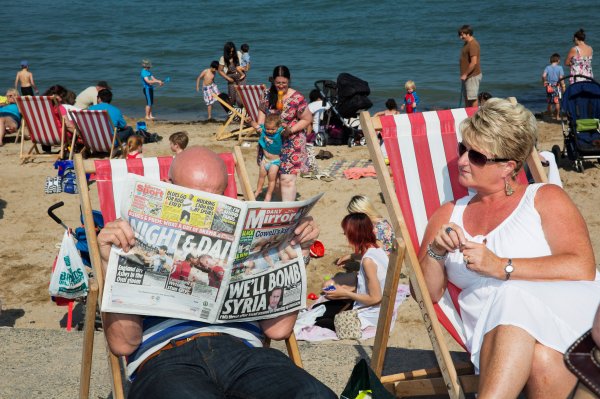 A Visual History of ISIS
Next Up: Editor's Pick