President Trump's Strategy for the 2018 Midterms? Replay the 2016 Election

President Donald Trump approaches political rallies like a standup comic workshopping material in a basement comedy club. In between the set pieces he knows will land a round of applause, he throws out new riffs and punchlines to gauge the audience’s reaction.

His raucous political barnstorming in Elkhart, Ind., on Thursday, was no different.

With midterm elections threatening his party’s hold on Congress, Trump told the packed gymnasium to elect Republicans because Democrats want to “raise your taxes” and “destroy your jobs.” Then he floated a fresh insult for Democratic Sen. Joe Donnelly, who is running for reelection: “Sleepin’ Joe.”

Echoing Reagan’s line about peace through strength, Trump then argued that his combative approach to foreign policy is already paying dividends, citing the upcoming talks with North Korea.

The rally hinted at some of the strategies Trump may use to stave off the threat of a Democratic takeover of the House and Senate which would stall his political agenda and give new oversight powers to his harshest critics in Congress.

Like most presidents facing their first midterms, Trump faces the potential for some bad news in November, but the losses could be even greater this time. Presidents with an approval rating below 50% — Trump’s currently averages around 43% — have lost nearly three times as many seats in the House in midterm elections since 1946, according to Gallup data.

But Republicans have a few countervailing factors in their favor, including a Senate map that strongly favors their side, with far more vulnerable red-state Democrats facing re-election fights.

Trump appears to be looking to shore up that advantage. White House aides have set their sights on senators in states Trump won by large margins such as Donnelly in Indiana and Sen. Jon Tester, a Democrat running for re-election in Montana who Trump recently clashed with.

The President will be ramping up his travel to key states toward the end of the summer, flying for rallies as often as twice a week as the election nears, an aide to Trump said.

Crucially, Trump’s campaign staff is planning to have him unleash harsh attacks on political opponents in the states he visits, attempting to harness the massive media attention he generates to hit Democrats and raise the name recognition of Republicans trying to unseat incumbents.

During his speech in Indiana, Trump brought Republican Senate candidate Mike Braun on stage, attacked Donnelly’s voting record and told the crowd they could send “swamp person back to the Senate” or “send a great Republican like Mike Braun to drain the swamp,” sparking loud chants of “drain the swamp” from the crowd.

Trump didn’t always like the phrase, until he heard the reaction of his crowds when he started using it in the last month of the campaign. “Funny how that term caught on, isn’t it. I tell everyone I hated it,” Trump said in December 2016 to a crowd of supporters in Des Moines, Iowa. “I said ‘drain the swamp’, place went crazy. I said, ‘Woah.’”

It was a campaign magic he sought to recapture in Thursday’s rally.

Throughout the rally, his applause lines focused on the kinds of hot-button issues that Trump hopes will turn out partisans such as the border wall, bringing back American steel, standing for the national anthem, moving the U.S. embassy in Israel to Jerusalem and “saying Merry Christmas again.”

For now, six months out from the election, it’s too soon to tell which lines will stick and whether this approach will work as well as he hopes, but it’s already clear how Trump intends to fight. 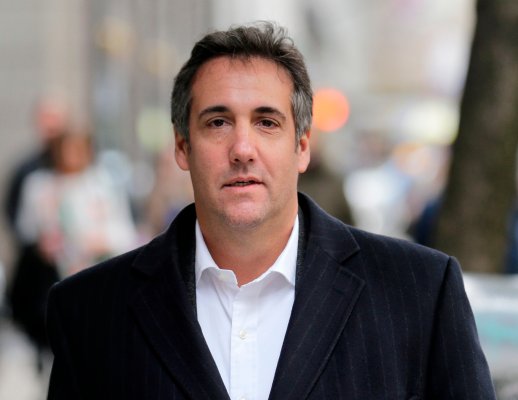 Here's How Essential Consultants Could Get Michael Cohen in Legal Trouble
Next Up: Editor's Pick