Police are investigating an incident caught on video in which a local police officer can be seen choking a young black man outside a Waffle House restaurant in North Carolina.

Anthony Wall, 22, was at a local Waffle House on May 5 after bringing his 16-year-old sister to her prom, when he supposedly got into a verbal altercation with some of the staff at the Warsaw, N.C. Waffle House. The staff called the police because of Wall’s behavior.

While it is unclear what preceded the confrontation, the viral video — which has been viewed more than 600,000 times on Facebook — starts when the police officer already has his hands around Wall’s neck, aggressively pushing him up against a wall outside the Waffle House.

Wall can be heard screaming “Get your hands off me!” as the officer wrestles him to the ground and handcuffs him. “I was pretty much trying to scream for air and trying to breathe because he was holding my throat and that’s when I got aggressive with him because you are choking me,” Wall told Eyewitness News 11.

The Warsaw Police Department has not yet responded to a request for comment on this article.

What happened between Wall and the wait staff inside the Waffle House is unclear, but Wall told Eyewitness News 11 that he takes responsibility for his behavior at the restaurant. Wall did not immediately respond to a request for comment for this article.

The May 5 incident is one example in a string of recent incidents in which police officers have been reported as using extreme force against unarmed black men and women in situations where it appears such force may be unwarranted. It’s also the second occurrence in two months in which Waffle House staff called police about a black customer. Chikesia Clemons, 25, was wrestled to the ground by police at a Waffle House in Alabama in April.

Prominent leaders in the black community are speaking out on social media about the incident, with well-known figures like Rev. Al Sharpton and Bernice King, Martin Luther King Jr.’s youngest daughter, putting public pressure on Waffle House to improve its treatment of black customers in response to Wall’s choking. 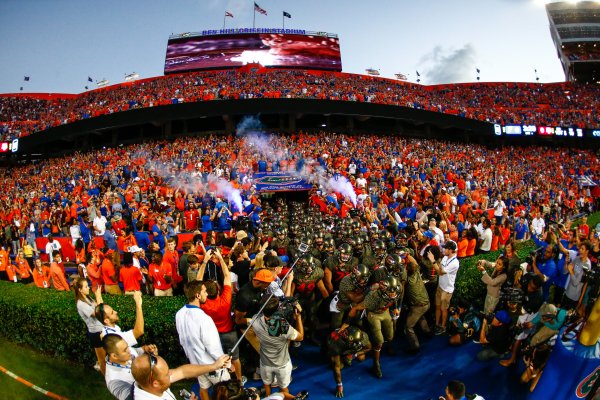 Black Grads Manhandled at Florida Commencement
Next Up: Editor's Pick