U.S. President Donald Trump listens while participating in a Customs and Border Protection (CBP) roundtable discussion after touring the CBP National Targeting Center February 2, 2018 in Sterling, Virginia. Trump is looking to ratchet up pressure on lawmakers to consider the immigration proposal he unveiled in Tuesday's State of the Union using the visit as an opportunity to again argue his proposal would bolster the country's borders.
Photo by Andrew Harrer-Pool—Getty Images
By Abigail Abrams

When Norma was recently injured in a car accident, she had to take time off from her job caring for a 93-year-old woman in California’s San Fernando Valley. While she was away, her client fell down and ended up hospitalized.

It’s the kind of danger that the elderly face without home care, something that has Norma concerned about her absence. “I think of it as if I’m caring for my own grandmother or mother,” she says.

But Norma worries that even after she is able to return to work, she won’t be able to stay on the job for long for a very different reason: her immigration status. Norma, who asked that her last name not be used in this story, grew up in El Salvador, but received temporary permission to live in the United States in 2001 after a series of earthquakes rocked her home country.

In January, the Trump Administration announced it would end temporary protected status, or TPS, for some 200,000 Salvadorans, giving them a deadline of Sept. 9, 2019, to leave the country.

TPS is also ending for immigrants from countries such as Haiti, Honduras and Nicaragua, many of whom hold similar service industry jobs as Norma. As aging Baby Boomers increase the demand for direct care workers, this profession has found itself at the center of the nation’s debate over immigration. The long-term care industry is already facing a worker shortage, and if tens of thousands of immigrants are forced to leave the United States, the country’s growing elderly population, as well as those with disabilities and long term illnesses, could be left without care.

Though it’s difficult to tell exactly how many direct care workers could be affected by changing immigration laws, one in four workers are immigrants, according to the Paraprofessional Healthcare Institute. About 34,600 workers are non-U.S. citizens from El Salvador, Haiti, Honduras and Nicaragua, all of which are set to lose TPS in the next two years, according to the institute, and another 11,000 hail from countries that fall under President Trump’s travel ban while 69,800 direct care workers are non-U.S. citizens from Mexico.

Most immigrants in these professions come to the U.S. legally, but President Donald Trump and some Congressional Republicans have made it clear they want to limit all immigration. Beyond TPS, many direct care workers come to the U.S. through family reunification, or what critics call “chain migration.” Earlier this year, Trump proposed a plan that would move away from family-based immigration to focus on skilled immigrants and drastically limit the total number of arrivals. While Congress has so far failed to pass an immigration deal this year, the administration’s priorities have those in the industry worried.

“It’s impossible to imagine that the long term care sector would survive without immigrants,” says Robert Espinoza, vice president of policy at the Paraprofessional Healthcare Institute. “If you make it more difficult for people who are already documented to remain in the country, what you’re doing is you’re making it more difficult for families to find workers to care for their loved ones and for employers to find workers to meet all their cases.”

About 10,000 Americans turn 65 every day, according to Pew Research Center, and research has shown that more than half will need long-term care. Data from the Bureau of Labor Statistics shows that personal care aides and home health aides — two of the main professions that make up the direct care category — are among the fastest growing jobs in the country, and yet it’s unlikely that there will be enough workers to fill those jobs.

Even if no immigration policies change, Paul Osterman, a professor of human resources and management at MIT’s Sloan School of Management, projects that the U.S. is on pace to see a shortage of 151,000 direct care workers by 2030 and a shortage of 355,000 by 2040. That does not include the 11 million unpaid family caregivers he estimates the country will need by 2040 — a number that could grow if more families cannot find paid help. “We’re heading toward a perfect storm of a crisis,” says Osterman.

In many parts of the country, health care providers and workers say the crisis is already here.

“We have seen clear evidence in the nursing home industry of struggles to find staff,” says Robyn Stone, senior vice president of research for LeadingAge, a trade group for nonprofit senior care providers. “We’ve heard anecdotes among our membership in rural communities that several nursing homes have had to close because they did not have the staff to serve their people. On the home care side, we’ve seen evidence of families looking for staff and not being able to find them.”

Miguel, a 36-year-old home health aide in Albuquerque who came to the U.S. from Mexico in search of a better life and more professional opportunities, says the challenging realities of direct care work have made it clear to him why the U.S. has such a shortage of workers. “Our profession is not properly recognized as something that is needed and will be needed more so in the future. Second, we’re not afforded any backing or protection as professionals,” he says. “And finally in many cases the wages that we are given may not be a living wage.”

Miguel, who did not want his real name used in this story because he is undocumented, worked as a nurse in Mexico, but since arriving in the U.S., has only been able to find work as an aide in a group of assisted living facilities. While he enjoys caring for the people there and hearing their stories, he is constantly thinking about would happen to them if he is deported. “I don’t know that you’re going to have lots of people racing to take these jobs,” he says.

Steven Camarota, director of Research at the Center for Immigration Studies, which advocates for strict immigration limits, sees the current state of the direct care industry as an opportunity. He notes that while immigrants are a growing part of the workforce, three quarters of direct care workers were born in the U.S. Camarota believes that cutting down on the flow of immigrants will force employers to raise wages, attracting unemployed Americans into the workforce.

“This is a real opportunity to draw in some more marginalized people, and we’re going to miss it if we create a guest worker program or we pull back on [immigration] enforcement,” he says.

But the solution is unlikely to be simple. Medicaid is the largest payer for nursing homes, and many senior care agencies also rely on Medicaid and Medicare, meaning that they cannot easily raise wages.

And even when employers do increase salaries, there’s no guarantee that Americans will want to take the jobs. Sherwin Sheik founded CareLinx, which matches home care workers with patients and families, with the goal of paying workers more and decreasing burnout. Workers sign up for his system, set their own rates and then CareLinx charges the patients a fee, letting caregivers keep their money and make at least 25% more than they would otherwise, Sheik says. Still, immigrants are a “massive” part of his workforce.

“It takes a lot to do these jobs,” Sheik says. “They are being filled by immigrants. Having these tighter policies is going to choke this industry.”

Norma has seen the impact of the workforce shortage firsthand. After her car accident, she called everyone she knew trying to find another home care worker to help her client. “But the people that I knew had a background in home care had all found jobs [in other fields] and they were getting paid more,” Norma says. Some now work in factories or clean houses, but few stuck with direct care.

Norma loves her job and says she enjoys helping her clients feel comfortable in their homes. She hopes that immigration policies will change again before her protected status ends in 2019 so she can stay with her current client. But already feels sad thinking about the 93-year-old having to find a nursing home if she has to stop helping her next year.

“We will not be the only ones who are affected in this. Many people will be affected, and many people who are U.S. citizens,” Norma says. “Consumers are going to be left without care. And they’re the most vulnerable in this equation. Really leaving them without care they need is what worries me the most.” 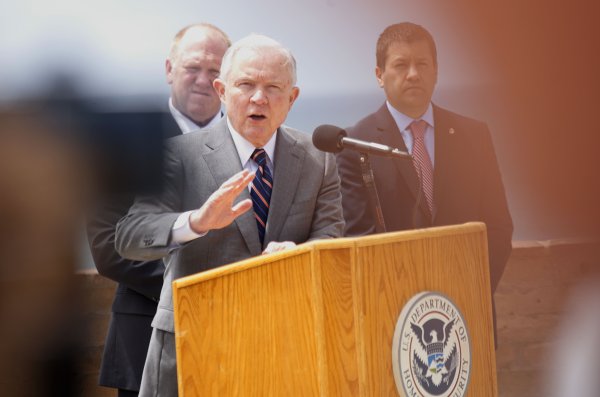 Jeff Sessions: Parents and Children Illegally Crossing the Border Will Be Separated
Next Up: Editor's Pick