HBO’s Fahrenheit 451 Extinguishes What Made the Book Great

“This is all you need to know. Anything else will make you sick. Crazy.” So says Michael Shannon, playing a captain of a brigade of “firemen” in HBO’s new film adaptation of Fahrenheit 451. He shows a group of schoolchildren emojified editions of the Bible, To the Lighthouse and Moby-Dick, text-length communiqués studded with pictorial symbols.

Ray Bradbury foresaw a great deal, but he couldn’t have predicted the emoji era. The sci-fi author’s 1953 novel depicts a world in which “firemen” ignite personal libraries so as to keep the population docilely addicted to low-calorie filmed entertainment. Here, the firemen’s exploits play out on social media, with Shannon’s and Michael B. Jordan’s arsonists treated as local heroes on an omnipresent livestream. Shannon bites into the story with trademark relish, but Jordan, a charismatic movie star, is a bit wasted, with his character’s evolution into a preserver of literature happening too rapidly to be credible.

Besides, Bradbury’s Fahrenheit works better as a polemic than as a novel, with ideas stated clearly to the point of repetitiousness. One of those ideas was a disdain for television, which in the novel saps the intellect and creativity of all who watch. It’s ironic, then, that television is the venue for this latest reimagining of his book–and that this version adds flash by the pound.

Some of that dazzle comes in the form of updates to the story that are attention-getting but far from timeless–and a bit underthought besides. For example, those who harbor books are punished through an official erasure of their identity. They become “eels,” seemingly short for “illegals,” a thudding literalization of what was always their plight. Their punishment, airing across social media, is met with cheers of “Time to burn for America again!”

It’s fitting that a catchphrase quite that clunky would catch on in a post-literary society, but the aggressiveness with which the film grasps for a contemporary parallel–a rhyme of sorts with “Make America great again”–betrays a flaw in all sorts of entertainment at the moment. Because this film is being released during the Trump presidency, it necessarily must comment on the President; because it is being released in the social-media era, it must comment on social media.

Much art of late has become protest art that is directed at the forces that govern our lives. It’s an understandable impulse, but it chokes off other potential insights and can make for incoherent stories that are fueled more by upset than reason. We’re told at one point in the film that books were outlawed in part because they depict racism and sexism–a provocative plot point that doesn’t jibe with the firemen’s callousness, and one the film skitters away from. This Fahrenheit 451 too often feels like an emojified version of its source material, cutting off anything more complex than an easy picture. Spend the time with a good book instead. 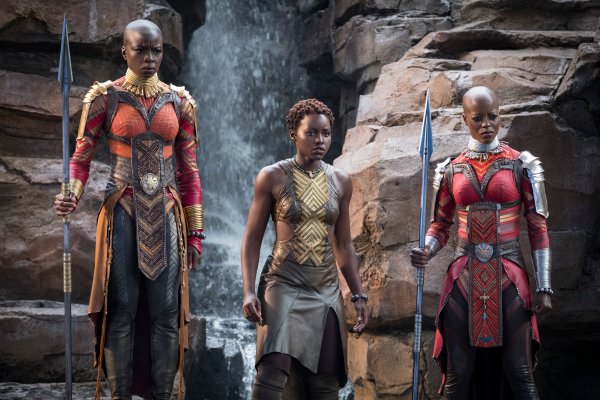 The Black Panther Director Is Into the Idea of a Female Spinoff
Next Up: Editor's Pick