In a stunning election upset, Malaysia’s 92-year-old Mahathir Mohamad has defeated his one-time protégé, the incumbent Najib Razak at Wednesday’s fiercely contested polls. Mahathir’s win ends the ruling Barisan National coalition’s six-decade-long monopoly, paving the way for the country’s first transition of power since independence more than half a century ago.

Mahathir, Malaysia’s longest-serving prime minister, stepped out of retirement and defected from the party he helped entrench in order to lead the opposition. When he is sworn in, Mahathir will become the world’s oldest head of government.

After a marathon night of ballot counting that stretched well-past 3 a.m. local time, the Election Commission’s official tally showed Mahathir’s coalition Pakatan Harapan (Alliance of Hope), along with an allied party in Sabah, had netted 121 seats, comfortably surpassing the 112 threshold needed to form the next government. By contrast, the ruling Barisan Nasional (BN) held on to just 79 seats.

In his concession speech on Thursday morning, Prime Minister Najib accepted his party’s defeat and vowed to respect the verdict of the people, but remained defiant about his former mentor’s victory.

“Since there is not one single party that has gained a simple majority, the Agong [king] will make his decision on who will be the prime minister,” he said, hinting at possible trouble on the horizon for Mahathir. Najib urged the country to remain calm while the king makes “the best choice.”

But Malaysian voters in the capital Kuala Lumpur have already begun rejoicing. As Mahathir declared victory hours before the official results came through, a crowd thousands-strong in western Selangor cheered and broke into a chorus of the national anthem. Some took to the streets in Kuala Lumpur with opposition party flags and cheers of happiness.

Earlier in the night, at a stadium in Langkawi, the island where Mahathir contested a parliamentary seat, voters anxiously awaited the results in a silence that was punctuated only by the buzzes of cellphones as they refreshed unofficial results posted on social media. When it was announced that Mahathir secured the seat, they erupted into applause and a chant of “long live Tun,” referring to Mahathir’s honorary title.

“This is history. I love Malaysia,” said one voter who could barely speak through his tears.

Supporters of Mahathir Mohamad celebrate the victory in general election in Petaling Jaya, Malaysia, May 10, 2018.
Stringer/Reuters

As results trickling in from the rest of the country continued to reveal the opposition was sweeping even ruling party strongholds, Mahathir accused the election officials of refusing to sign off on his coalition’s inevitable victory, and said he feared some “hanky panky” was underfoot.

“The reality is that we received a majority long before the official announcement,” he said at a live-streamed press conference. Mahathir said that even the palace had contacted his coalition, acknowledging their unofficial win.

As the wait for the official results continued well-past the usual 10 or 11 p.m. cut-off, voters on social media expressed concern and frustration. Several results centers also reported sudden electricity blackouts holding up their count. At one point, late in the evening, the tallying even appeared to have stopped, with the unofficial results putting Mahathir’s coalition in the lead, and the official announcement only covering five states, four where BN was leading.

Mahathir, when asked if he had any advice for Najib, warned the man he groomed for office not to defy the will of the people.

The opposition landslide delivers a decisive rebuke of Najib, who polls had predicted would lose the popular vote, but, due to significant gerrymandering and malapportionment, was projected to weather the challenge and retain control of the government.

Outgoing Malaysian prime minister Najib Razak of the Barisan National party addresses the media after his party lost the 14th general election in Kuala Lumpur on May 10, 2018.
Mohd Rasfan—AFP/Getty Images

Najib, who was seeking a third term after coming to power in 2009, has been dogged by allegations of corruption as at least 10 countries investigate the $4.5 billion missing from a state investment fund known as 1Malaysia Development Berhad (1MDB). While Najib denies any wrong-doing, the U.S. Justice Department said some $30 million from the fund was used to buy jewelry for his wife, Rosmah.

Mahathir took on an ambitions campaign tour across the country to connect the scandal to voters’ bread-and-butter concerns about rising cost of living, and a widely unpopular goods and services tax imposed three years ago.

While a seemingly unlikely choice to lead an opposition that had formed in large part to challenge corruption alleged during his own 22-year rule, Mahathir was seen as the best hope for catalyzing a “Malay tsunami” — shifting the country’s ethnic majority from the party they have long been loyal to.

After they are sworn in, the opposition coalition has vowed to get to work on a 10-point agenda over their first 100 days, including repealing the GST tax and investigating the 1MDB scandal.

“We are not seeking revenge. What we want to do is to restore the rule of law,” Mahathir said. 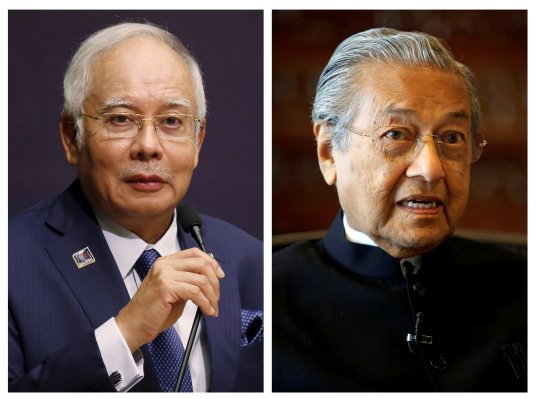