20 of the Tastiest, Fanciest and Most Bizarre Royal Wedding Souvenirs

From royal teddy bears worth hundreds of English pounds to a ‘Sparkle like Markle’ orb balloon, this list of royal wedding merchandise and souvenirs — released just in time for the royal wedding on May 19 — really has it all.

CraftedCans.com has a limited edition royal wedding-themed IPA named Markle & Spencer (Spencer after Prince Harry’s maternal heritage). The craft beer — the perfect way to toast the happy couple — is available for £3 ($4) a can.

Available from CraftedCans.com for £3 ($4) per can

The Grown Up Chocolate Company, based in Harlow, England, is commemorating Harry and Meghan’s big day with a limited-edition ginger (yes, another nod to Harry’s hair) and blueberry flavored chocolate bar, described as “the perfect accompaniment to any royal wedding celebrations.”

North London bakery Dunn’s Bakery created a special line of doughnuts to commemorate the royal wedding (as well as the U.K.’s National Doughnut Week). The delicious glazed treats, which are covered in a decadent gold and white icing as well as an edible portrait of the happy couple, have a strawberry jam and cream filling inside them. Proceeds from every doughnut sold will be donated to The Children’s Trust, the U.K.’s leading charity for children with brain injury and neuro-disability.

The limited edition bears are available from Merrythought for £269 ($362)

Cake designer Rosalind Miller designed a luxurious two-tiered Crown Cake in honor of the royal wedding. The delectable dessert includes a replica hand-painted crown made of fondant icing, a painted edible gold tier as well as six layers of moist sponge with four layers of filling (flavors include elderflower and lemon, raspberry and vanilla, salted caramel and Sicilian lemon).

The popular U.K.-based delivery service Deliveroo has teamed up with the London nightclub Mahiki to launch a limited-edition ‘home-bachelor kit’ containing ingredients for a coconut rum cocktail within a wooden treasure chest.

Welsh jewelry brand Clogau has launched a new collection of jewelry in honor of Harry and Meghan’s wedding. The Windsor Pearl jewelry range, available in either yellow or rose gold, is set with a shimmering freshwater pearl and adorned with white topaz. Items in the collection include a yellow Windsor pearl pendant (£560 / $757) and rose Windsor pearl stud earrings (£250 / $338).

Afternoon tea is a quintessentially British activity, therefore it’s no surprise that a luxury tea brand is cashing in on the royal wedding. Newby Teas of London produced a limited-edition gift box to celebrate the upcoming royal wedding. The Royal Wedding Silken Pyramid collector’s item is a large circular, reusable “hat box” decorated with a design inspired by the Lovers’ Knot tiara worn by Princess Diana. The box contains 36 sachets of traditional and bespoke teas and tisanes in a royal purple interior.

London-based grocery store Partridges released a royal wedding edition of its iconic Chelsea Flower Gin. The gin, described as “elegant, indulgent and rounded with body and freshness,” is infused with bergamot, as well as citrus and coriander, with hints of lemon tart and vanilla. The royal tipple goes as well with tonic water as it does with an Earl Grey tea.

Personalised childrenswear brand My 1st Years, which shot to fame when Prince George wore their robe to meet Barack Obama, has released a My 1st Years Limited Edition Royal Range in time for the royal wedding. The range includes a personalised grey robe with a crown design.

British Cassis, a quintessentially British blackcurrant liquor, has created ‘The British Royale’ cocktail. To make the drink, the liquor (which costs £19.99 / $27) is topped with English sparkling wine Castle Brook Classic Cuvee 2013 (at £30 / $40.50 a bottle).

Available from White Heron Drinks and Castle Brook Vineyard from £19.99 ($27)

Tinker Tailor London has three decorations, perfect for hanging on door handles or resting on tables, in order to commemorate the royal wedding. The decorations, each handmade in India, are being sold exclusively via The Royal Collection shop.

The most bizarre royal wedding souvenirs

Crown Jewels of London, a self-proclaimed leading suppliers of heirloom condoms, unveiled a limited-edition packet of condoms to commemorate the royal wedding. The condoms come in a special box that plays a combination of God Save the Queen and the Star Spangled Banner when opened. It also features a commemorative portrait of the happy couple by the Romanian artist Jacqués Valentin. The same company released similar condoms to mark the 2011 wedding of Prince William and Kate Middleton, the Duchess of Cambridge.

Bags of Love, an online service which allows customers to print their own choice of photos on a range of more than 400 sustainable and eco-friendly products, has seen Harry and Meghan personalized merch soar in popularity in the build up to the royal wedding. The company has been promoting personalized Harry and Megan and (and Will and Kate) swimsuits as “there’s nothing like printing the face of a Prince or Duchess on a swimming costume and rocking it proudly on the beach.”

UGears has brought out a special edition royal carriage wooden model kit which can be assembled from scratch in a couple of hours without tools or glue and contains a hidden motor. The kit is a four-horse drawn carriage model, inspired by the 1902 State Landau, complete with the happy couple and a royal coat of arms. The wood is sustainably sourced and 5% of the profits from a £39.99 ($53.99) model will go to the British homeless charity Crisis — one of the charities Harry and Meghan have asked people to donate to instead of wedding gifts.

Holywell Spring Water, which bottles water in Malvern, in Worcestershire, England, have designed two special bottles to commemorate the royal wedding: a limited edition Markle Sparkle sparkling water and Still Harry, a non-sparkling water. Marlvern has long been connected to the royal family; Queen Elizabeth I is said to have drunk it in public in the 16th century. It has received a royal warrant, during the reigns of Princess Mary of Adelaide and King George V.

Available from Holywell Spring Water from around £1 ($1.35)

Bubblegumballons.co.uk released a commemorative ‘Sparkle like Markle’ orb balloon, complete with a red, white and blue tassel tail and sparkly silver writing. The balloon, which floats out a box when opened, can last for up to three weeks — meaning your royal wedding celebrations can last into June, should you wish them to.

In celebration of the Royal couple’s dedication to the fight against single-use plastic bottles, SodaStream, the world’s largest sparkling water brand, has dressed up a set of limited-edition reusable water bottles in special royal-inspired hats. The set of miniature hats, created using 3D printing, are 100% recyclable, are inspired by iconic looks previously sported by female royals. After an auction, the entire proceeds of the bottles will go to the plastic-free charity Surfers Against Sewage.

The limited royal edition bottles will be auctioned on royalsodastream.com from May 15 to 17 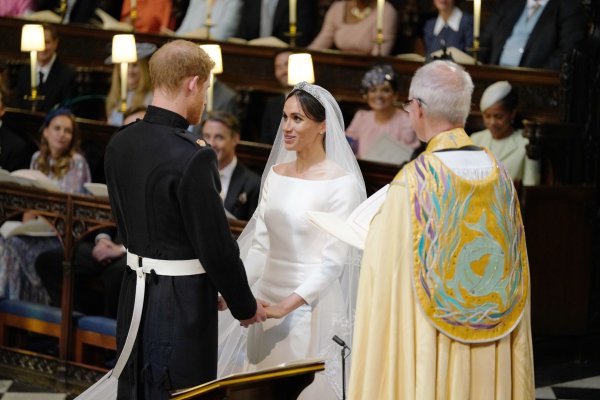 What We Know About Meghan Markle's Royal Title
Next Up: Editor's Pick