Inside the Art Studio That Brings Broadway Shows to Life

By Eben Shapiro and Julia Lull

Putting on a Broadway musical requires an army of talent. People that can play the oboe. Carpenters. People that can expertly sing and dance while effortlessly picking up and twirling another person that can also expertly sing and dance. People that have achieved world renown for their ability to point, shade and filter spotlights to create the mood of Parisian river banks or African savannas. And behind them all, hangs the work of one of the smallest and most specialized of the theatrical guilds, the Broadway scene painters.

Many of the backdrops are produced by the team of artists at Scenic Art Studios, who work out of a 15,000-square-foot space in the 1830s Regal Bag brick warehouse on the shores of the Hudson River in Newburgh, N.Y. During the winter, the artists watch bald eagles float by on ice floes. The workshop is a sanctuary for formerly starving artists: Each day, the company sends a car to to pick up the four employees from Brooklyn who take the 7:55 a.m. from Grand Central to Beacon and drive them across the Beacon-Newburgh Bridge for a day of painting, before returning them in time to catch the 4:05 p.m. back to the city.

The enormous space is filled with an arsenal of squeegees, brooms and custom-built tools for applying paint to backdrops. And stacks of gallon cans of Rosco Paints, the set designer’s paint of choice. Off Broadway is one of the firm’s most popular colors.

The standard drop for a Broadway theater is roughly 30 feet by 50 feet, not quite tennis court size, but big. A major Broadway musical requires as many as a dozen different painted scenes and must be completed on a tight time frame — weeks, not months. To become a full-fledged scene painter, you must undergo a rigorous battery of tests to gain admission to United Scenic Artists Local US 829, “the representative voice of designers and scenic artists.”

Under the guidance of Tony- winning designer Santo Loquasto, the crew recently finished up the painted backdrops for Carousel, a revival of Richard Rodgers and Oscar Hammerstein’s 1945 classic starring Jessie Mueller. Joseph Forbes, owner of Scenic Arts, assigned Irina Portnyagina as lead painter of the Carousel set because of her facility for painting sky and clouds. She has developed a technique that uses copious amounts of water, mixed with the paint. “Water finds its way,” she says, working with a puddle behind her squeegee. “You have to have confidence, not fear.” 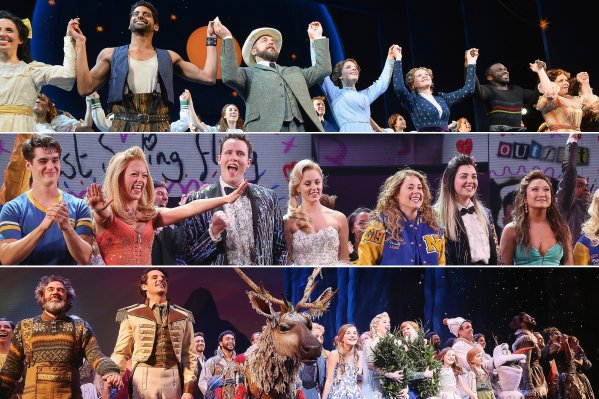 The 2018 Tony Nominations Are Here. See the Complete List of Nominees
Next Up: Editor's Pick