Netflix’s Evil Genius Ends With a Stunning Confession. Here’s What Could Happen Next in the Collar Bomb Case

Warning: This post contains spoilers for Evil Genius: The True Story of America’s Most Diabolical Bank Heist on Netflix.

New charges could be filed in the notorious “collar bomb” crime after a Netflix documentary revealed a confession from an alleged conspirator who may have implicated herself nearly 15 years later, according to the film’s creators and the federal investigators who led the case.

In the final minutes of Evil Genius, a four-part docuseries that examines what it calls “America’s most diabolical bank heist,” a woman who knew Brian Wells — the pizza delivery driver who died in 2003 after robbing a bank in Erie, Pa. while a bomb was fastened around his neck — admits to setting Wells up in exchange for money and drugs from the conspirators.

“It hurts me that I could do this to somebody who I cared about,” says Jessica Hoopsick, who was Wells’ prostitute and friend. “I want people to know he was innocent.”

MORE: Why We Are Drawn to True Crime Shows

In the documentary, Hoopsick says a conspirator approached her to find a “gopher” who could be scared into robbing a bank. After being offered $5,000, Hoopsick suggests Wells and gives up his work schedule at the pizzeria. “I have a lot of remorse for a lot of the stuff I did and a lot of shame and guilt,” she says. “I definitely want justice for Brian’s memory. He wasn’t out to hurt nobody. He had no parts in the planning. He had no idea what was going to happen to him.”

Investigators said Hoopsick was uncooperative after the deadly heist in 2003. They had long suspected her involvement but didn’t have enough evidence to build a case against her.

“We always believed that Jessica knew more,” retired ATF Special Agent Jason Wick told TIME in a recent interview about the documentary. “Getting her to tell us at the time was a whole other issue. We just couldn’t get enough from her. We were in a tough spot. She just wouldn’t cooperate.”

A still from "Evil Genius: The True Story of America's Most Diabolical Bank Heist" on Netflix
Netflix

Now, Wick and his partner Jerry Clark, who was the lead FBI investigator on the collar bomb case, believe Hoopsick may have said too much for her own good. “I think that if anyone implicated themselves, it was her, as being a conspirator, in bringing him to the table,” Wick said.

Wick said the new information “should certainly be passed along” to any state or federal law enforcement agency for review, since he said there’s no statute of limitations for murder. But Wick and Clark are not convinced Hoopsick is a credible enough witness. “There is evidence that directly conflicts with what she’s saying,” Clark said. “There’s always some underlying reason for her cooperation. The fact that she’s saying it, you got to wonder why.”

Barbara Schroeder and Trey Borzillieri, the creators of Evil Genius, told TIME they believe Hoopsick was moved to finally speak out because she couldn’t hold in her secret any longer. “This was eating her up inside,” said Borzillieri, the documentary’s co-director and executive producer, who added that Hoopsick was not offered anything in return for her interview.

It’s unclear whether authorities and prosecutors will decide to pursue charges against Hoopsick or any others after Hoopsick’s new confession. The FBI did not return requests for comment, and the U.S. Attorney for the Western District of Pennsylvania declined to discuss the documentary’s findings. Hoopsick could not be reached by TIME, despite multiple efforts. Relatives said she had fallen out of touch with her family, and several phone numbers provided by two of her recent attorneys were either disconnected or belonged to other people.

Schroeder, who wrote and directed Evil Genius, said the team had discussed the confession with current and former investigators at the state and federal level. “Technically, she could be charged,” Schroeder said, “but every agency we spoke to said there was no interest.”

Two conspirators — Marjorie Diehl-Armstrong and Kenneth Barnes — were ultimately convicted of conspiracy and armed bank robbery charges in connection with the collar bomb case. The Federal Bureau of Prisons said Diehl-Armstrong died of natural causes at a Texas prison on April 4, 2017. Barnes is expected to be released in 2027, according to FCI Coleman Low, the federal correctional facility where he’s currently incarcerated in Florida.

The creators of Evil Genius say they hope their documentary helps bring some closure to Wells’ family and ramp up enough public interest in the case to gain access to sealed grand jury documents that provide more answers on the collar bomb case.

“We feel this is a second chance at justice,” Borzillieri said. “What we hope we’re achieving is new truths and new depths within the truths.”

The “big twist at the end,” Schroeder said, “is just another piece to the puzzle.”

“There is more to the story that meets the eye,” she added. 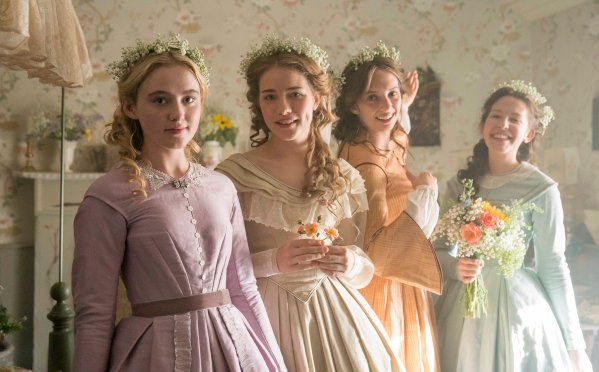 The Real Family That Inspired 'Little Women'
Next Up: Editor's Pick