The Kilauea Eruption Has People Worried About Volcanic Smog. Here’s How Dangerous ‘Vog’ Really Is

Thinking of Hawaii typically brings to mind pristine white-sand beaches and crystal-clear seas. In contrast to these picturesque scenes, however, is the Kilauea Volcano, situated on the state’s Big Island, which saw a major explosion this week and has some reports warning of a volcanic smog (or “vog”).

Since it started continuously erupting in 1983, Kilauea has each day pumped out at least 300 metric tons of sulfur dioxide gas, a pollutant also produced by power plants and industrial manufacturing operations. Over the course of a year, Kilauea’s sulfur dioxide production is equivalent to somewhere between 5% and 10% of that emitted by all of China, according to a 2016 paper published in Environment International. And after a major eruption like the one that occurred last week, production kicks into overdrive.

Geologists near the volcano are currently measuring sulfur dioxide levels above 100 parts per million — levels that are dangerous and perhaps even deadly, says Dr. Elizabeth Tam, a professor of medicine and respiratory health at the University of Hawaii’s John A. Burns School of Medicine and the lead author of the Environment International paper.

“These are really high levels, and that’s why [people near the volcano had to] evacuate,” Tam says. “But I have to say that, periodically, many places on the Big Island actually see levels that are way over what [the Environmental Protection Agency] considers safe.”

Sulfur dioxide is toxic on its own, but it also reacts with moisture, oxygen, dust and sunlight in the atmosphere to create volcanic smog, or “vog,” according to the U.S. Geological Survey (USGS). Vog, which is a constant reality on the Big Island, can exacerbate asthma and other respiratory conditions; irritate the eyes, nose, throat and lungs; and cause symptoms ranging from flu- and pneumonia-like illness to headaches and extreme fatigue.

When there’s lots of moisture in the atmosphere, sulfur dioxide emissions can also result in acid rain, which can damage property and taint drinking water — and with rain in the forecast for Thursday and Friday, that possibility looks likely on the Big Island, CNN reports.

Public health officials have ordered people who live in the immediate vicinity of Kilauea, such as the nearby Leilani Estates area, to evacuate because of the immediate threat posed by eruptions and heightened sulfur dioxide levels. Tam also points out that, as lava burns homes and property, other pollutants are likely to appear in the air, alongside sulfur dioxide and vog.

But, according to real-time data from the Hawaii Department of Public Health, air quality elsewhere on the Big Island is currently considered either “good” or “moderate.” That’s because, while concentrations of sulfur dioxide are dangerously high around Kilauea and its fissures, trade winds disperse the gas, mainly to the backside of the island. “Wherever the vents are, yes, it’s bad right there,” Tam says. “But it’s usually blown away by these prevailing trade winds.”

Those winds do disperse pollution, keeping air quality largely acceptable, but Victoria Avery, an associate program coordinator at the USGS’ Volcano Hazards Program, says that means it can sometimes affect residents who live off the Big Island. “The wind can disperse it even to other islands, like Oahu, and cause people respiratory distress,” Avery says. “Vog is something that can be a pretty far-flung health hazard in the Hawaiian islands.”

Still, while high levels of sulfur dioxide and vog are concerning enough to require an evacuation of the Leilani Estates area, Tam says evidence suggests that residents’ day-to-day exposure to vog actually isn’t as harmful as breathing in other types of pollution, such as that created by cars. Man-made air pollution has been linked to everything from worsened cardiovascular and respiratory health to premature death, and a January 2018 report from Yale University researchers even called air quality the “leading environmental threat to public health.” The side effects of vog exposure, however, are not as clear.

“There are a number of studies that seem to indicate that, compared to the respiratory and cardiovascular effects of traffic-related air pollution, the effects of pure vog that hasn’t mixed with burning houses and cars and car exhaust is relatively mild,” Tam says. Her study, for one, found that, while vog can worsen asthma symptoms for current sufferers, it didn’t seem to cause new cases of asthma among children living near Kilauea. Hawaii does, however, have higher-than-average asthma rates.

So while sulfur dioxide is present in man-made sources of air pollution, other substances that make up smog and fumes — such as byproducts from burning coal and gasoline — may be to blame for its health hazards, Tam says.

Some people are also simply more susceptible to vog than others, Tam says, adding that everything from the shape of an individual’s upper airway to his or her levels of congestion could influence reactions to vog. People with asthma and other respiratory conditions should steer clear, but others may be able to breathe vog in with few noticeable symptoms. “If you take 100 people, there’s going to be a range of susceptibility,” she says. “Some will be very symptomatic, and some will not.”

All in all, Tam says, vog is something to avoid if possible, but likely not a cause for significant alarm.

“We certainly shouldn’t go wallow in it,” Tam says, “but there are worse things.” 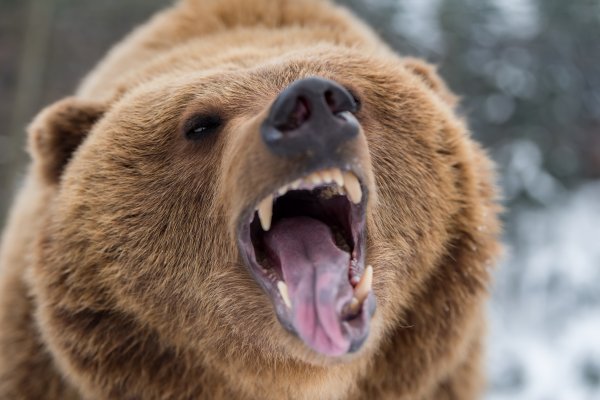 Going Hiking? This Is What You’ll Need to Protect Yourself Against Bears
Next Up: Editor's Pick