For his return to the annual Met Gala, Jared Leto adhered to the 2018 theme of Heavenly Bodies: Fashion and the Catholic Imagination by channeling Jesus at fashion’s biggest night on Monday night — that is, if Jesus wore full Gucci.

Leto sported a Virgin Mary blue Gucci suit with navy lapels that he paired with a pink pussy bow shirt (if this sounds like Melania Trump’s debate attire, it’s because they were both designed by Alessandro Michele for Gucci). Leto upped the religious ante by pairing his suit with a floral brocade stole that was reminiscent of the clergy stoles that priests often wear, as well as a golden crown fit for a saint that sat on his flowing, shoulder-length locks.

Leto arrived to the Met Gala alongside Michele and singer Lana del Rey, a trinity attired entirely in Gucci for the occasion.

Leto was widely applauded on the Internet for his adherence to the 2018 Met Gala theme. Some of his fans were quick to point out his striking resemblance to what many people think Jesus looked like, while others gave him props for taking chances with his fashion choices — something that many of the male attendees are critiqued for not doing. 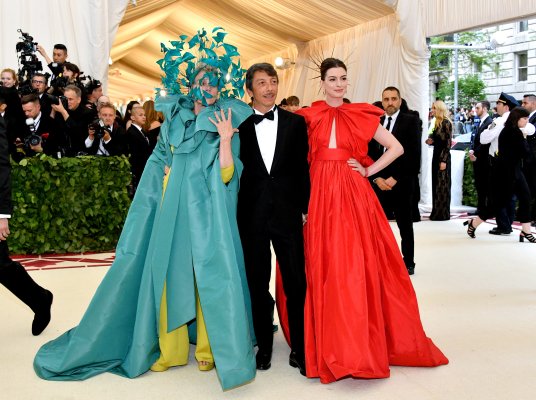 No One on Earth Is Enjoying Life More Than Frances McDormand at the 2018 Met Gala Right Now
Next Up: Editor's Pick