The 2018 Met Gala might be fashion’s biggest night, but that didn’t stop the Internet from having some fun with the annual event’s theme: Heavenly Bodies: Fashion and the Catholic Imagination.

Cue the memes of the HBO show The Young Pope.

While many fashion icons — ranging from Madonna to Lady Gaga — have used the Catholic faith as sartorial inspiration, there might not be a greater style legend than the Pope himself, Benedict XVI, who was named Esquire’s “Accessorizer of the Year” in 2007 for his cherry red loafers — a perfect complement to his heavily embellished papal ensemble.

However, Pope Benedict XVI isn’t the only pope who has captured the hearts of the fashion flock — or the Internet for that matter. When it came to the Met Gala, social media users were more than happy to supply endless amounts of GIFs, memes, and pithy quips about the 2018 Met Gala theme by channeling Jude Law’s character, Pius XIII (or Lenny Belardo) in the television series The Young Pope.

Some looked to the Young Pope as the ultimate fashion inspiration for the night.

While others had nothing but Young Pope jokes for the red carpet. 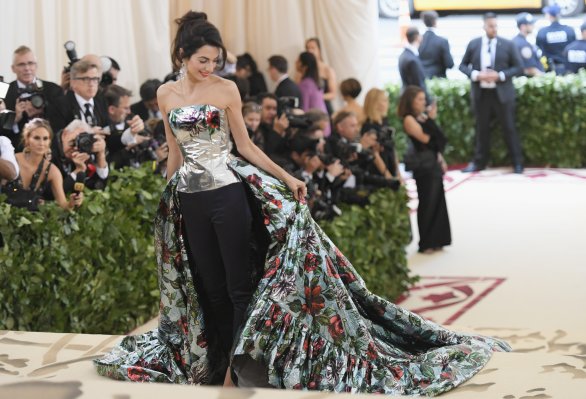 Amal Clooney Went Rogue in a Pants Gown at the 2018 Met Gala
Next Up: Editor's Pick