More than half of Americans now have a favorable view of First Lady Melania Trump, according to a new poll released by CNN. This is an improvement for Trump, who had failed to win over the majority of Americans — especially Democrats — when the polling firm SSRS asked in January.

Some 57% of Americans now think positively of the First Lady, according to the new numbers, marking a 10-point jump from January, while 27% hold an unfavorable opinion of her. Even Democrats, less than a quarter of whom had good things to say about the President’s other half in January, are thinking well of her. According to the new poll, 38% of Democrats and 41% of self-identified liberals, hold favorable views.

A December Gallup poll found that over 54% of Americans viewed the First Lady favorably, including 35% of Democrats. Trump’s favorability is about 15-points ahead of her husband’s approval rating during the week of April 30-May 6, according to Gallup. That distance is in line with the gap that existed between previous first ladies and their spouses, including the ever-popular Laura Bush and Michelle Obama.

A quick analysis of Gallup figures shows that at this point during the Bush and Obama presidential administrations, both Laura Bush and Michelle Obama enjoyed favorability ratings in the high-60s, low-70s.

The SSRS poll comes amid an ongoing scandal that has drawn negative attention to the First Couple’s marriage. Two women have come forward claiming they had affairs with President Trump shortly after Mrs. Trump gave birth to their son. One claims a lawyer for Trump paid her $130,000 to keep quiet about the alleged affair ahead of the 2016 election. Another says an agreement she signed was effectively used to shut her up.

Last week, Rudy Giuliani, a member of Trump’s legal team, said that Trump had repaid his lawyer for the hush payment via installments. The revelation appeared to contradict previous statements from Trump and White House officials that the president had no knowledge of the payments.

First Lady Melania Trump is non-traditional in a number of ways. For the first few months of the Administration, she did not live in the White House with the president, choosing instead to continue living in New York with their son while he finished out his school year. On Monday, the First Lady is expected to unveil the official platform of issues she will champion while in the White House.

According to reports, the initiative is expected to have a heavy focus on children, including the impact of social media and cyberbullying. Trump first announced an interest in combatting cyberbullying on the campaign trail, which raised eyebrows given the bombastic and combative persona her husband has online.

The poll of 1,015 people was conducted between May 2 and May 5 — as the Giuliani revelations were unfolding — but before the First Lady unveiled her official platform. It has a margin of error of 4.4 percentage points. 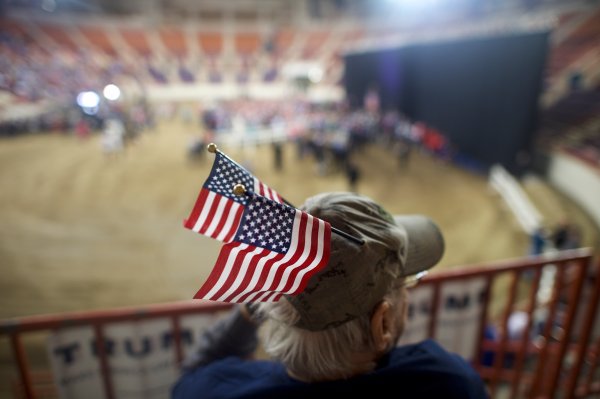 Why Republicans Should Fear a Rural Revolt
Next Up: Editor's Pick