Hawaii’s Big Island is dealing with the aftermath of the eruption of the Kilauea volcano and a 6.9 magnitude earthquake on May 4. Leilani Estates, one of the properties hit hardest, lost 26 homes to the encroaching lava, while “hazardous fumes” continue to pollute the air. Now we’re beginning to see video of the lava flows as they happened — like this one, taken by a time lapse camera on the Leilani Estates properties, according to a storm-watching social media account.

In the video, you can see the steaming lava emerging from the underbrush, fully covering the road, and ultimately consuming a parked car that was, unfortunately, not moved. Another cut in the video shows a telephone pole going down as the lava continues to smolder, air filled with smoke.

The lava has so far covered about nine acres of land in the Leilani Estates residential area, while the earthquakes opened up several new fissures that are emitting fumes. About 1,700 people were under evacuation orders. As of Sunday night, evacuations for Leilani Estates remained in place, with the County of Hawaii latest alert noting that “active venting of lava and hazardous fumes” are still a problem. 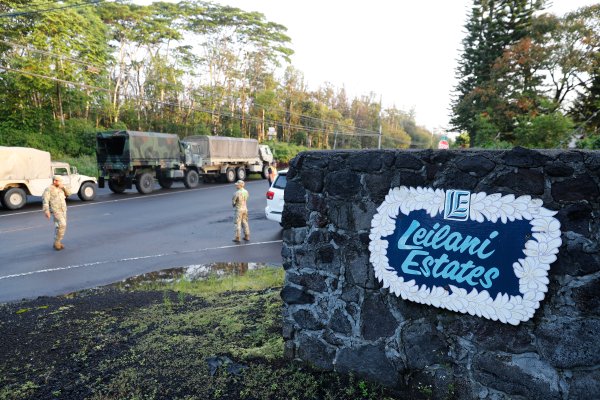 'This Island Is So Crazy.' Why Living on the World's Most Active Volcano Doesn't Scare These Hawaiians
Next Up: Editor's Pick